Continental Airlines and Delta Air Lines snapped their losing streaks this week, closing 3.7% and 2.4% higher yesterday amid a choppy session on Wall Street. Early positive sentiment eased on a lukewarm response to the latest statement from the Reserve Bank, which read the Fed "expects that inflation will remain subdued for some time."

Earlier, the OECD released its latest economic outlook stated the slowdown in member economies is “reaching the bottom following the deepest decline for more than 60 years”. It was the first forecast in two years to see previous projections for economic growth revised upwards – most clearly for the large emerging economies and the US.

According to the OECD, US economic activity this year is expected to fall 2.8%, against the 4.0% decline projected in March. Growth in 2010 is now forecast at 0.9% compared with 0% previously. The report states, “the trough in US activity is expected during the second half of this year”.

Shares in American Airlines’ parent, AMR, eased 0.3%, as the company asked lenders to ease the terms of its USD435 million loan, according to a Bloomberg report.

Elsewhere, Republic Airlines continued to rise yesterday (+9.7%) as investors applaud its acquisitions of Midwest and Frontier. 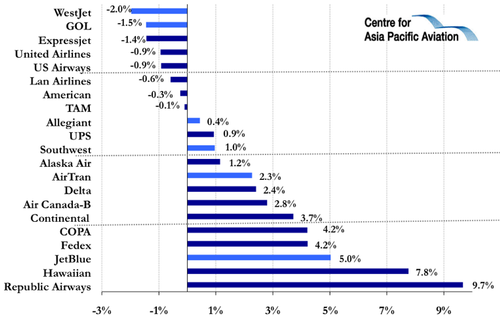