Continental CEO Jeff Smizek echoed his legacy counterparts in saying that, while the industry is still under pressure, it must invest in its product in order to compete. That investment for the industry is coming in the form of refurbishing and replacing current fleet types in order to capitalise on the greater efficiencies of newer aircraft and provide a competitive in-flight experience.

Delta is the only legacy not re-fleeting, citing the USD10 million all-in costs of an MD-90 as giving it an advantage as it continues to pay down debt and otherwise repair its balance sheet from the impacts of fuel spikes and recession. For the most part, Continental, too, is doing that, but is chomping at the bit to get its hands on the Boeing 787. It is set to serve Auckland and Lagos, Nigeria, the latter as part of its effort to connect the communities of interest in the energy industry.

Smizek also reviewed the company’s latest ancillary revenue initiatives including preferred coach seating, day of departure upgrades, premium wines and liquors for sale from Autumn 2010, self service options reservations, check in, and its new artificial intelligence, Continental.com Virtual Expert booking aid Ask Alex. The meals, he said, would be of higher quality than what it offered free until recently. “The meals program alone, even if we just break even, represents a USD35 million value to Continental,” he said.

Speaking at the Bank of America Merrill Lynch Global Transportation conference, Smizek reiterated the success of joining the Star Alliance connecting twice as many passengers through Star as it did when it was a member of SkyTeam. “It’s a home run for Continental and it is continuing to grow,” he said. “We’ve got other products to come. We instituted the sale of exit row seats which is a big home run for us. In the old days – and that is just a few months ago – we’d give them away. It’s a brilliant idea to sell those as premium seats. That is generating USD120,000 per day from this one product. Customers value it and are willing to pay for it and it is delivering good value to the bottom line as well.” 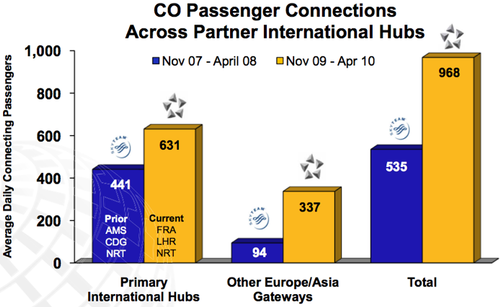 Premium travellers are back

He echoed the other airline executives presenting during the conference, saying business travellers were definitely back, although down about 5% from 2008 levels. “Clearly they are returning and we see that both in the numbers year over year and in the RASM growth year over year as well,” he said. “The recovery is taking hold, but it is the actions of corporate customers that is important. Talk is cheap, but having the butts in the seats are two different things. It’s not only the number of corporate customers, but it is the significant RASM gains we are seeing that tells us that the recovery is on and continuing to improve. The business traveler is slow to return but they are returning. The Pacific is on fire and the Atlantic and Latin America are doing reasonably well.” 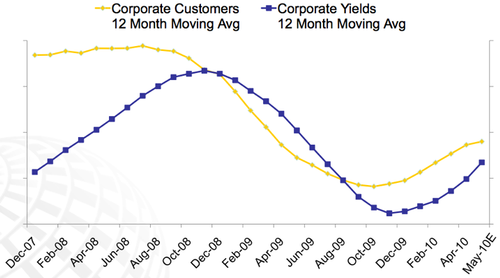 Merger with United: "there is nothing like being a single carrier"

In discussing the pending United-Continental merger, Smizek noting that both carriers have a RASM premium compared to the rest of the industry with 10.15 cents and 9.61 cents, respectively.

He also seemed to be speaking to United employees when he spent considerable time talking about culture. “Culture is the most import asset at Continental,” he said. “You can’t find it on the balance sheet. It’s based on what your mother taught you. You have to treat others as you would like to be treated – with dignity and respect – and never tell a lie. If you do those two things your employees will enjoy coming to work and will do a great job for your customers. It all comes back to culture.”

He emphasised his open-door policy, as well of his intense efforts to get in front of employees in person to make sure they are heard.

When asked about United’s culture, Smizek was very diplomatic. “Going through bankruptcy is hard on all constituents including employees and they have had a pretty tough time. Change is scary, but it can also be very good and this will be good for United employees. They have a bright future ahead of them. Everyone who helps the value will get a piece of the value.”

In responding to a question on how labour is responding to the merger, Smizek said they were on board. “In my view, labour is endorsing the merger,” he said. “All groups understand the merger is beneficial and offers them a brighter future than they would otherwise have on a stand-alone basis. The pilots are way ahead of others in working on a transition agreement. We are working to get collect bargaining agreement by year end, but it is not a pre-requisite for the merger. As for the other work groups, some have the same unions and some have different unions and the groups have to decide who it is that will ultimately represent them. But we have had a history of very good labour relations that is fair to the groups and fair to the company and I see no reason that should change.”

Smizek handed to podium over to CFO Zane Rowe who recounted Continental’s philosophy on capacity discipline. “We are continuing that trend,” said Rowe. 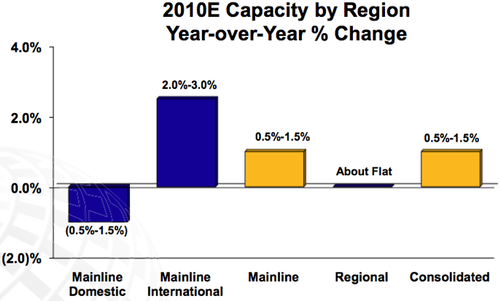 Beyond 2010, the combined United-Continental will gain "tremendous" fleet flexibility affording the use of 750 aircraft or as little as 550, allowing them to better match aircraft to demand. 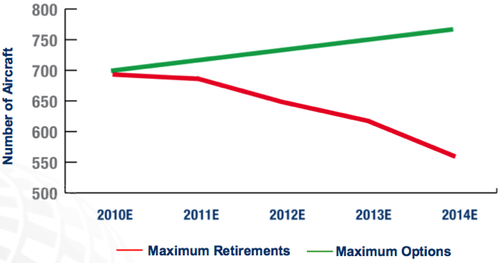 Rowe reported that while the company enjoyed an 11.4% EBITDAR margin, it was not satisfied, adding the number reflects that the company still has much work to do on both the revenue and cost sides.

He also reported that its continued fleet renewal made the company 26% more efficient today than it was in 2000 and much better than its peers. 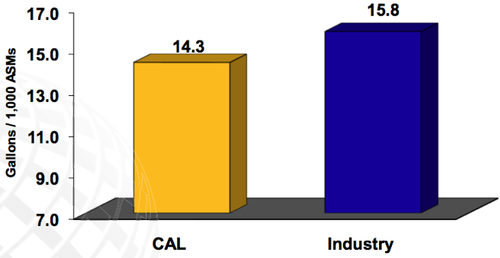 The addition of the 787 will allow it to up-gauge from a 757 and down-gauge from a 777 while taking seats out of the market, replacing old aircraft and maintaining frequency. “We truly can’t wait to get our hands on it,” he said, adding fleet investment has also include nose-to-tail audio and video on demand, in-seat power, 180-degree lie flat seats which will be on all 777 by year end and three quarters of the 757 fleet by year end.

Still, Rowe reiterated that despite the investments, management was mindful of liquidity needs finishing the end of the first quarter with USD3.15 billion in unrestricted cash and short-term investments. That amounts to 25% of the last 12 months trailing revenue. 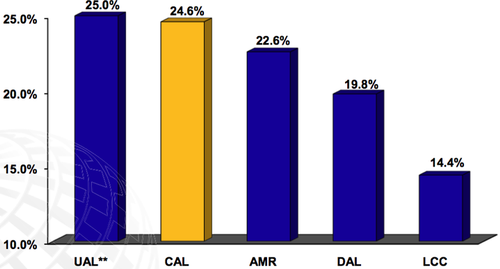