Consumer sentiment on the rise in the US, falling in Australia

Asia Pacific airline shares have been riding the waves of consumer sentiment lately, gaining in Asia on rising optimism in the US and falling heavily in Australia on sagging local conditions.

Asian stock markets were buoyed on Friday’s reports a private index on US consumer sentiment rose to the highest level in more than two years in Jun-2010. Earlier, The Conference Board noted that its US Consumer Confidence Index posted a third consecutive monthly gain in May-2010, noting that although the reading is still weak by historical levels, sentiment “appears to be gaining some traction”. All eyes will be on the Jun-2010 numbers.

Westpac noted the “widespread optimism apparent at the start of the year has evaporated, giving way to a much more sombre mood”, adding “consumer sentiment has provided critical early warning signs in the past. Most recently, it was the first indicator to show a decisive weakening in 2008”.

Shares in Qantas and Virgin Blue did not trade yesterday, due to a public holiday. 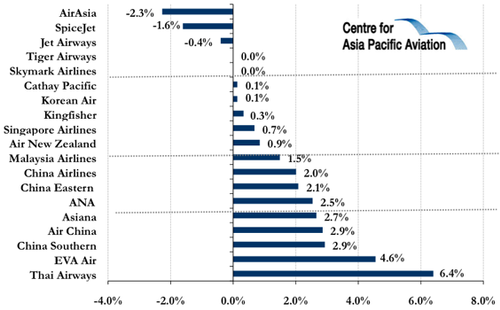