Construction of Vietnam’s USD16 billion, 100 million passenger per annum new airport for Ho Chi Minh City, the most populated city-region in the country, is at last under way, seven years after it was first mooted.

It will be one of the largest airport projects in the Asia Pacific region and the most expensive piece of infrastructure in Vietnam’s history.

Even now, it is subject to further possible delays as the government grapples to get 40 transport infrastructure projects back on track, some of them in preparation for an anticipated surge in foreign visitors.

But the most pressing issue remains the need to get the private sector on board; if not now, at least when the airport is operational, and there might be an opportunity for PPP financing and operation of future terminals.

Airports Corporation of Vietnam (ACV) announced that construction of the Long Thanh International Airport's passenger terminal will start in Oct-2022.

Piling work for the passenger terminal was completed one month ahead of the schedule and more than 14 million cubic metres of soil has been dug, filled and levelled.

Long Thanh Airport's construction is divided into three phases, with the first phase to include development of the terminal, a 4000m x 60m runway and facilities to accommodate 25 million passengers and 1.2 million tonnes of cargo per annum.

The airport is now expected to be completed in 2025, in its first stage. It will eventually be able to handle up to 100 million ppa.

Most expensive infrastructure project in the country’s history

The airport is the most expensive infrastructure project in Vietnam's history and it will replace the existing Tan Son Nhat International Airport as the city's main airport.

The first phase is costed at USD7.8 billion, with the eventual bill running to more than USD16 billion – which at today’s values would make it one of the most expensive in the world.

It has been a long, hard road to get this far.

In Vietnam breaks ground on Long Thanh airport: big ambitions, a CAPA report published in Jan-2021, it was revealed that the ground had finally been broken on the airport six years after it was first mooted.

At the beginning of Aug-2022 Vietnam's Prime Minister Pham Minh Chinh directed the Dong Nai Provincial People's Committee to complete site clearance for the airport within the month.

Governing bodies and investors were urged to speed up approval of the design and construction of the main works to ensure that the plan is met. They were also directed urgently to select investors to deploy service works and ensure on-time completion.

One of many transport infrastructure projects that have fallen behind schedule

The airport is not the only project that is lagging behind. In total 40 others in total include: road construction throughout the country, including two key ring roads, the high-speed rail line running on the north-south axis, and numerous other urban rail lines.

The government statement made clear that the amount of work that needs to be done is “very large,” and that the implementation time is “urgent,” so there is a need for direction, administration and coordination of activities among ministries, branches and localities.

Therefore, the establishment of a State Steering Committee was declared to be “essential”.

Finding a replacement for Tan Son Nhat (TSN) has also taken on an air of urgency. Tan Son Nhat is currently the only international airport in the Ho Chi Minh City Metropolitan Area, which covers 30,400 square kilometres (11,740 sq miles) and has an estimated population of 20-22 million inhabitants.

TSN was built during the Vietnam War to support war transportation, hence its location inside the crowded Ho Chi Minh City, where expansion is limited.

Owing to location and safety issues, it is difficult to expand the airport to meet the increasing annual growth of passengers. The maximum design capacity of Tan Son Nhat is 25 million passengers per annum, but in 2018 it exceeded 40 million and continued that way the following year, before the COVID-19 pandemic.

Ambitions multiply as Vietnam envisages over 200 mppa by 2038

The new airport was originally intended to supplement capacity at TSN but ambitions have gone beyond that, as Vietnam might now attract more than 205 million air passengers by 2038 (according to the most recent estimates).

Room for improvement in the network

There is room from improvement in the route network currently offered at TSN, as the network map below indicates.

The network is heavily oriented towards Southeast Asia and Australasia, with a mere handful of flights to Europe and just one to North America.

There are no flights connecting Latin America or Africa at all (although both will be connected via the Middle East). 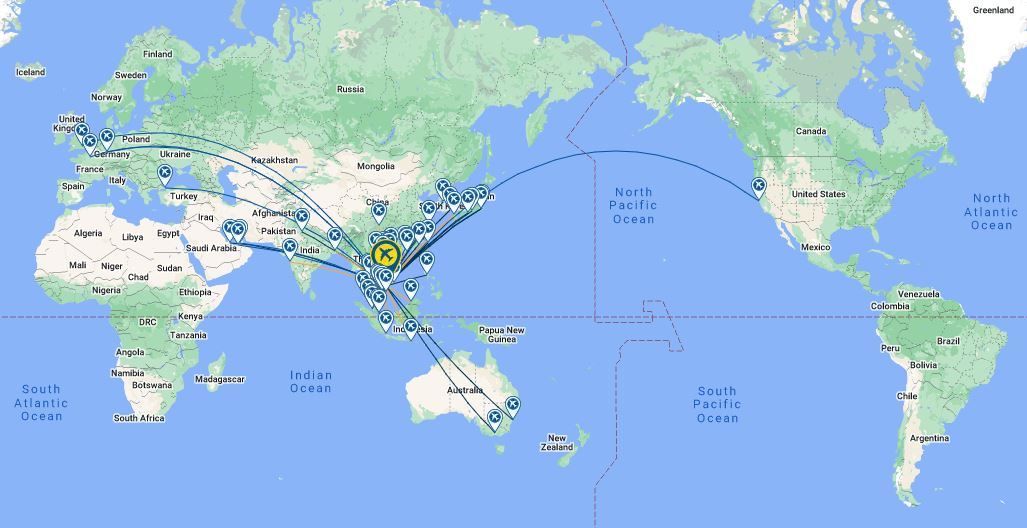 But it is direct flights that drive the tourism from new markets.

The suggestion is that Vietnam Airlines will be the only Vietnamese airline to operate domestic flights at Long Thanh, while international services will only be operated by other airlines – suggesting that TSN will be Vietnam Airlines’ main base for a while after the new airport opens.

The existing airport has recovered from the COVID-19 pandemic downturn

As the chart below shows, TSN has recovered from the COVID-19 pandemic-influenced downturn, with effect from the second week of Jul-2022, when 2019 seat capacity levels were reached.

As that target has more or less been reached throughout the country as well, efforts can restart to attract the previously aspired-to level of tourism growth.

Government still seeks to work with the private sector, but it remains wary

The government’s comments about the need to ‘select investors to deploy service works’ requires clarification as it probably means the hiring of private contractors to complete these works rather than actual investors into the project.

Under current plans by the Vietnamese government, the Airports Corporation of Vietnam (ACV) will be the main investor in, and operator of, the airport, with The Southern Airports Corporation (a company registered under the Ministry of Transport) in charge of development of this project.

Financing has been an issue throughout, and much of it will come from the public purse, together with what loans can be engineered. The private sector looked as if it would play a major role at one time, but that possibility has diminished considerably since France’s Groupe ADP withdrew from a wider investment in Vietnamese airports.

In 2015 ADP was reported to be partnering with Credit Suisse in raising approximately USD3 billion for the Long Thanh International Airport development.

But eventually Groupe ADP’s interest in Vietnam as a whole diminished, following its failure in 2017 to secure a strategic investor stake in ACV and its 22 airports across Vietnam.

Groupe ADP had looked to tie up a deal with ACV whereby Groupe ADP would acquire a 7.4% equity stake, later 20%, and make long term investments there. An open sky policy between Vietnam and France was also on the cards.

Since then, the Ministry of Transport has consistently called for domestic and foreign private companies to invest in the project under public-private partnership arrangements. But following the pull-out by Groupe ADP, none of this has transpired.

It may well be that ACV’s strategy now is to finance the first stage of the airport from its own funds and loans (terminal, runway and other basic infrastructure), in the hope that it can then later attract private firms to co-operate by leasing one or more terminals or by entering into PPP deals to build and operate others.

The airport will eventually have four runways and four terminals unless it is scaled back, so there will be plenty of opportunities.

A new high-speed rail service is proposed to be connected to the new airport as part of the Ho Chi Minh City-Nha Trang section of the North-South high-speed railway line (the one referred to earlier, which is also a matter of concern to the government and in need of being ‘speeded up.’)

The rail service will give passengers a more direct and efficient transit option to Ho Chi Minh City than there is by road, and the roads are already congested closer to the city centre.

Meanwhile, further details have been released about a strategy to develop three urban areas around the new airport.

That sounds less like a designated airport city than an ‘aerotropolis’ stretching far away from the airport estate – but such investments can be hard to justify unless and until an airport is operational and building large numbers of passengers and freight volumes.