Competition has again intensified in the South African domestic market with the launch and expansion of FlySafair. The new LCC launched services in Oct-2014 and is already competing on five of South Africa’s main routes.

The South African market has contracted since the 2012 collapse of 1time and Velvet Sky. The consolidation left Comair and South African Airways (both of which have full service and budget brands) with a duopoly, leading to a significant improvement in profitability.

As another new LCC, Skywise, also prepares to launch there is now a risk the South African domestic market could quickly swing back to overcapacity. New pan-African LCC groups fastjet and flyafrica.com, which are already competing in the regional international market, also continue to look at entering South Africa’s dynamic domestic market.

This is the third instalment of a series of reports analysing the 2015 outlook of Africa’s emerging LCC sector. The first report looked at Tanzania-based fastjet and the second at flyafrica.com, which launched in Jul-2014 in Zimbabwe and is planning to launch an affiliate in Namibia in Mar-2015. This report examines FlySafair and the South African domestic market.

Johannesburg, Cape Town, Port Elizabeth and George are all among the six largest airports in South Africa based on current seat capacity. The only major destination not yet served by FlySafair is Durban, which is South Africa’s third largest city and airport. (The other top six airport not yet served by FlySafair is Johannesburg alternative airport Lanseria.)

Cape Town-Johannesburg is by far South Africa’s largest route and is one of the 10 largest city pairs in the world (based on seat capacity for the week commencing 5-Jan-2015). FlySafair currently accounts for about 6% of total seat capacity between the two cities.

FlySafair has a slightly larger market share on its other two Johannesburg routes. On the much smaller Cape Town-George route, where it is the only LCC, it accounts for about half of the total current capacity. It is also the market leader on Cape Town-Port Elizabeth, which is served with a limited number of flights by all competitors except Mango.

Notes: Johannesburg capacity figures include both OR Tambo and Lanseria airports
BA-branded flights and Kulula-branded flights are both operated by Comair
SAA regional partners included under SAA as they operate under the SA code and SAA brand
Source: CAPA – Centre for Aviation

Overall FlySafair currently has 21,120 seats in South Africa’s domestic market, giving it approximately a 6% share. FlySafair has stated that it aims to capture a 6% to 8% share of the market in 2015 and subsequently build up its share to 12%. This should be achievable once the new LCC enters Durban, which could be served from both Cape Town and Johannesburg, and thickens its schedule on some of its existing routes.

The total LCC penetration rate in the South African domestic market is currently slightly under 50% as Kulula currently accounts for about 22% of domestic seat capacity while Mango accounts for 20%.

SAA is the leading brand with a 36% share although most of the flag carrier’s domestic routes are now operated by regional partners. The BA brand accounts for about 16% of current domestic seat capacity. 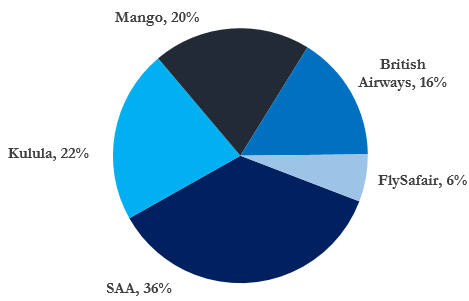 Total domestic seat capacity in South Africa is up by about 8% year over year, driven primarily by the FlySafair’s entry. But total capacity is still slightly below Jan-2012 levels, according to CAPA and OAG data.

Back in Jan-2012 1time had about a 13% share of domestic seat capacity while Velvet Sky had about 5%. Kulula had 18% and Mango 12%, resulting in an overall LCC penetration rate of 48%, identical to the current rate. SAA had a 40% share in Jan-2012, giving it a slightly larger share of the full service pie.

Kulula and Mango have always maintained the South African market is not large enough to support three LCCs. Indeed similarly sized domestic markets have two or fewer LCCs. For example, Vietnam has two LCCs, Saudi Arabia one and Chile does not have any. Even much larger Australia, which is about four times the size, currently has only two LCCs.

But it was inevitable a third LCC would eventually re-enter the South Africa market. Many in South Africa see a need for at least one independent LCC because Kulula and Mango are both under full service groups and are therefore generally seen as relatively conservative when it comes to pricing and pursuing expansion.

In some respects it was surprising it took two years following 1time’s exit, which occurred in early Nov-2012, for a new LCC to burst onto the scene. Velvet Sky exited in Mar-2012 but was a short-lived carrier, having only launched in Mar-2011.

FlySafair and Skywise have been trying to launch since 2013

FlySafair initially planned to launch in Oct-2013 but encountered a last minute setback after a South African court issued an injunction which restrained the carrier from operating scheduled services pending a review of the initial determination by the Air Service Licensing Council. FlySafair eventually prevailed after proving it met South Africa’s airline ownership requirement despite allegations by potential competitors.

FlySafair always maintained it met the minimum 75% South African ownership requirement. FlySafair is a subsidiary of South African maintenance provider and charter carrier Safair, which has been operating for more than 40 years.

According to the CAPA Fleet Database, Safair currently has a fleet of about 10 older generation 737s - a mix of passenger aircraft, freighters and combis - including the 737-400s that are used in the new scheduled operation. It is a subsidiary of Irish ASL Aviation Group, which is a subsidiary of a Belgium-based holding company.

Skywise also has been working towards launching since shortly following the collapse of 1time. Initially Skywise , which is led by a team of former 1time executives, was planning to begin operations in 1Q2013.

Skywise is now aiming to launch services in Mar-2015. It will reportedly begin selling tickets in Feb-2015 for flights between Johannesburg and Cape Town.

Given its repeated delays the launch of Skywise is far from certain. A Mar-2015 launch would mean missing the peak southern hemisphere summer season. But low fuel prices could potentially persuade investors it is worth a shot.

The last time there were four LCCs in the market, in early 2012, competition became irrational. Kulula and Mango, which have been able to return to profitability over the last two years, are obviously concerned about the potential return of overcapacity and so-called irrational behaviour. Four LCCs is generally not seen as a sustainable scenario for the long term – not even with the recent reduction in fuel prices.

But South Africa’s new LCCs – as well as fastjet and flyafrica.com – believe the market is ripe for stimulation as fares have been relatively high. They do not view Kulula and Mango as pure LCCs. They see opportunities to lower fares. South African consumers will obviously benefit from more aggressive competition at the bottom end of the market.

But the reality is South Africa’s domestic market could again prove to be too small (and too seasonal) to provide the scale that an independent LCC will need in order to thrive over the long term. International operations would help but opportunities in South Africa’s highly regulated international market are extremely limited for new entrants. As CAPA outlined in earlier reports, nearly all the available traffic rights in short-haul international markets are now allocated to SAA and, to a lesser extent, British Airways' Comair franchise.

LCC partnerships could be a viable option

fastjet currently is the only LCC serving the Johannesburg-Dar es Salaam market and is now looking to add services to Johannesburg from Zambia and Zimbabwe.

Both flyafrica.com and fastjet have also applied to establish South African affiliates, which would be used to enter the South African domestic market. But both have put their South African projects on the backburner, which is sensible given the launch of FlySafair and planned launch of Skywise.

Partnering with FlySafair or Skywise could be a more viable option for fastjet or flyafrica.com. Such partnerships could offer network synergies and scale through potential joint purchasing. Joining forces could make it easier to fight back competitors, particularly the SAA Group, which will certainly respond to the increasing competition in both its domestic and regional international markets. This response will likely include accelerating expansion at Mango as well as discounting at the SAA brand.

2015 could be a critical year for LCCs across sub-Saharan Africa. South Africa, the region’s largest market, once again will emerge as the main battleground.