Growth in Colombia’s domestic market continued full steam ahead during the first five months of 2013 as the country's passenger growth jumped 21% to roughly 8.5 million. This follows already strong 15% growth in domestic traffic during 2012, when the country's airlines transported close to 19 million domestic passengers.

The expansion reflects Colombia’s stature as one of the fastest growing domestic markets in the world, fuelled by solid economic growth, a rising middle class and pent-up demand and opportunities for penetration by low-cost carriers. Presently, VivaColombia is the only carrier operating under a low-cost business model in the country. While it does operate on some of Colombia’s trunk routes, VivaColombia is designing its network around a point-to-point framework to bypass the country’s busier and more congested airports, namely Bogota.

Colombia’s domestic market has undergone a subtle transformation during the last few years as LAN, which is now part of LATAM Airlines Group, purchased low-cost carrier Aires, overhauled its operations, adopted the full-service model and rebranded the carrier as LAN Colombia to solidify a presence in the increasingly important Colombian market. Copa Colombia (formerly Aerorepublica) opted to shift its focus to international operations while VivaColombia introduced service with the goal of replicating the low-cost business model its sister carrier VivaAerobus has forged in Mexico.

In the first five months of 2013 Colombia’s leading domestic carrier Avianca saw a roughly 3ppt drop in its market share from 63% to 60% despite a 15% increase in traffic. LAN Colombia recorded a 1ppt drop in share to 18% while Copa Colombia recorded a 2ppt drop to 8%. VivaAerobus captured 8% of Colombia's domestic passenger traffic compared to less than 0.1% during the first five months of 2012 (as it only launched in May-2012).

Note: VivaColombia's share in Jan to May-2012 was less than 0.1% as the carrier launched operations in May-2012 and carried only about 2,600 passengers that month.
Source: Colombia's CAA

VivaColombia’s entry may have shaved some points from Avianca’s still-commanding market share lead, but the 21% growth in the domestic market for the first four months of 2013 shows there is room for significant stimulation.

One of VivaColombia’s top markets in terms of seats deployed, Medellin-Santa Marta, recorded a 333% rise in traffic year-on-year to 109,000 passengers (for all carriers) between Jan-2013 and May-2013 on a 336% surge in seat capacity. Loads fell just 1ppt to 82%, which indicates the market is absorbing the supply being introduced albeit likely lower price points as Avianca and VivaColombia are the only two carriers operating on the route.

VivaColombia between Jan-2013 and May-2013 transported 675,478 passengers. While it may fall short of its goal of transporting two million travellers in 2013, VivaColombia recorded a 79% seat load factor through the first five months of 2013, slightly higher than the average of 77% for Colombia’s domestic industry.

Note: VivaColombia not displayed as no valid comparisons are available because the carrier launched in May-2012
Source: Colombia's CAA

Even though Avianca has lost a bit of ground with respect to market share, its loads were still healthy and fell only 1ppt. LAN Colombia had the most significant rise in seat load factor, recording a 10ppt jump to 76%. The carrier had a weak performance in the first five months of 2012 as it took time for the rebranding and restructuring from late 2011 to have an impact.

LAN Colombia’s domestic passenger traffic grew 14% through the first five months of 2013 on a 1% decline in capacity, reflecting its new focus on international expansion supported by the deployment of Boeing 767 widebodies. Between Jan-2013 and May-2013 the number of international passengers transported by LAN Colombia nearly tripled from about 24,000 to about 70,000.

VivaColombia’s establishment of Medellin as its largest base and headquarters has contributed to explosive growth at Jose Maria Cordova international airport during the last year as CAA data show that the airport’s passenger numbers (international and domestic combined) jumped 60% to 2.5 million for the first five months of 2013 compared to the first five months of 2012. Medellin is also served by Enrique Olaya Herrera Airport, which is closer to the city centre but can only accommodate turboprops.

Medellin Cordova’s domestic passenger number skyrocketed 69% during that time from roughly 1.3 million to 2 million, driven by VivaColombia’s market entry. Based on listings from VivaColombia’s website its serves seven destinations from Medellin – Bogota, Cartagena, Cali, Barranquilla, San Andres, Monteria and Santa Marta. It competes with Avianca from Medellin to Bogota, Cali, Barranquilla, Santa Marta and Cartagena and Bogota to Cartagena and Cali.

Avianca is obviously the market leader on those competitive routes given its larger scale in the Colombian market compared with just a handful of Airbus A320s flown by VivaColombia. (Avianca is part of Avianca Holdings, which has a group fleet of over 120 aircraft.)

While its growth in Medellin is significant, VivaColombia’s expansion strategy during the next year is not exactly clear. Prior to its launch VivaColombia was awarded 10 pioneer route authorities by the Colombian government. The markets are not served by any other carrier, and originally the government gave the carrier a one-year deadline to launch service. Several of the approved pioneer markets it listed at the time of its launch in May-2012 have not yet been introduced, so their status remains unclear.

VivaAerobus approved routes as of May-2012 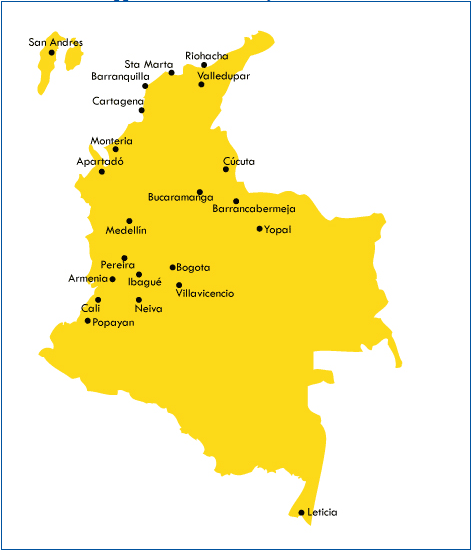 During its first year of operations VivaColombia has experienced a management shake-up as CEO Fred Jacobsen left the carrier in Feb-2013 and long-time Spirit Airlines EVP of marketing Barry Biffle took the helm as CEO. Mr Biffle was instrumental in both Spirit’s shock marketing campaigns and its aggressive unbundling strategy modelled on Ryanair. The Ryan family-backed investment firm Irelandia is an investor in VivaColombia and its sister Mexican carrier VivaAerobus.

One of Mr Biffle’s top priorities is likely to evolve VivaColombia’s ancillary revenue generation to a new level. The carrier's approach is to stimulate demand by offering very low base fares as it attempts to target passengers that still rely on long bus journeys throughout Colombia, which parallels VivaAerobus’ strategy in Mexico, another country with an expanding middle class.

Some aspects of Spirit’s model can be successfully replicated in Colombia – targeting the cost conscious leisure traveller and visiting, friends and relatives (VFR) with bare bones fares and charging for many aspects of the journey including checked and carry-on bags and printed boarding passes at the airport. In the US, legacy airlines leave Spirit largely to its own devices in pursuing the low end of the market, a space network airlines no longer pursue as the lower yielding traffic has become unattractive.

But in the younger Colombian market, Avianca is not likely to cede such a significant number of potential passengers to VivaColombia. As a result the competitive landscape within the Colombian market is likely to become interesting during the next few years as Avianca continues to pursue expansion in its original home market while LAN Colombia and Copa Colombia decide how involved they will become in the domestic space.

At the moment there appears to be equilibrium in the domestic space as domestic capacity increased 19% while traffic grew 21% during the Jan-2013 to May-2013 time period. With just 8% of the market VivaColombia is not yet a major threat, but with a new chief and investors well-versed in aggressively building the unbundled low-cost model in developing markets, its presence will be felt soon enough.