So it follows that Donghai and Qingdao are seeing larger marketshares while Loong is seeing lower marketshares given more intense competition. Neither of the three carriers have yet to be one of their hub airport's nine major carriers. As they grow this will change, but current incumbents will likely continue to hold the top largest ranks at the airport. Growth aspirations – or at least those publicly stated – vary too. Qingdao Airlines expects to have 50 aircraft by 2020 and 100 by 2025, Donghai 29 737-800s by 2020 while Loong has not stated long-term growth projections.

For now the carriers appear to follow a stock-standard approach to airline building rather than enter the market with a new proposition. Such an approach is common in fast-growing markets, but with China overhauling its market approach, the new airlines may need to adjust before they even settle in.

Qingdao Airlines is China's newest airline, having launched on 27-Apr-2014 with a flight from its Qingdao base to Chengdu. (Its newest title status is likely to last for less than a month as other carriers prepare to launch.) Qingdao has maintained its Chengdu service with a single daily flight while launching Qingdao-Changsha. Changsha is considered to be in central China while Chengdu is in the west.

Such a schedule is obviously limited, but being able to amass a double-digit share of the market speaks of the growth opportunities in secondary and tertiary cities. In both of its markets Qingdao Airlines is one of, or the, smallest carriers, but it is not difficult to see the airline in time becoming dominant should it see potential. While Qingdao is competing against China's bigger airlines, capacity is overall limited from other carriers. That does not give Qingdao a frequency disadvantage. Its slots are for the most part are at reasonable times, although its schedule is still limited.

Further, loyalty to airlines in China is still fickle, unlike well-heeled corporate markets elsewhere, although airlines in China are trying to change that. And with Qingdao being its city's local airline, it can expect some benefit of passengers (especially government officials) using Qingdao Airlines where possible.

Neither the Chengdu (CTU) or Changsha (CSX) routes are amongst the 10 most popular routes from Qingdao. 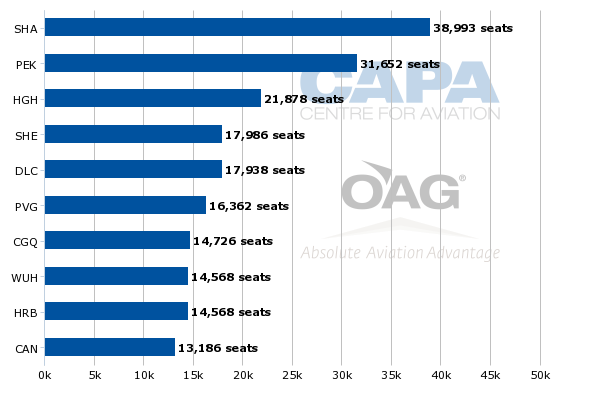 Qingdao Airlines however has stated its desire to serve cities include Beijing, Guangzhou, Shanghai, Shenzhen and Xiamen, and even have overnight bases in some of those cities. Bases will allow it to offer a more competitive schedule as well as serve other destinations. Qingdao's exact future base expansion is unclear. Qingdao Airlines expects to have 50 aircraft by 2020 and then ambitiously doubling in size to have 100 aircraft by 2025. This plan however is broadly subject to China's next two Five Year Plans, the details of the first of which is still being worked out.

In Sep-2013 Qingdao Airlines ordered directly from Airbus 23 A320s (comprising five A320ceos and 18 A320neos) with the first of the order to be delivered in 2016. Qingdao's first A320 is leased from China Aircraft Leasing, according to CAPA's Fleet Database. Its second A320 is due in May-2014, also from China Aircraft Leasing. An additional aircraft is projected to join the fleet in each Oct-2014 and Dec-2014, although this is subject to change and remains tentative information.

Such bold growth projections are characteristic of the ambition in Chinese air transport. Rapid growth has often meant strategy and sustainability have taken a back seat.

For now, Qingdao has yet to become one of its home airport's top nine carriers, but with about eight daily flights should crack the list, although even being one of the top five carriers could take some time to reach. Shandong Airlines, the largest carrier at Qingdao, owns 20% of Qingdao Airlines. It is not yet apparent how the two will co-exist and if there could, for example, be route hand-offs. 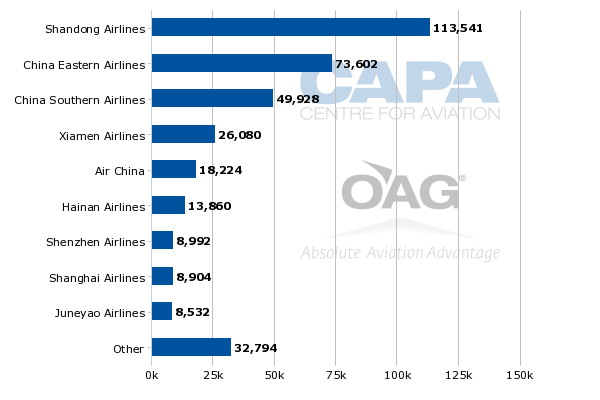 Qingdao Airlines remains for now a domestic carrier. Unlike other new entrants, it has stated limited aspirations for international services, but not too much should be read into this. The domestic market is and will be the heart and soul of China, both in terms of capacity size and profits. 85% of Qingdao's capacity is in the domestic market with 15% in international and regional (Hong Kong, Macau and Taiwan). For a secondary airport, Qingdao leans towards being more international (relatively speaking).

This is largely due to capacity from Korea. Korea has open skies with China only in Shandong and Hainan provinces. The closer proximity of Shandong to Korea compared to Hainan makes it an attractive destination. While this may be competitive for Qingdao Airlines, it is arguably better to have North Asia as your international backyard than Southeast Asia, where LCCs are more prominent and robust. 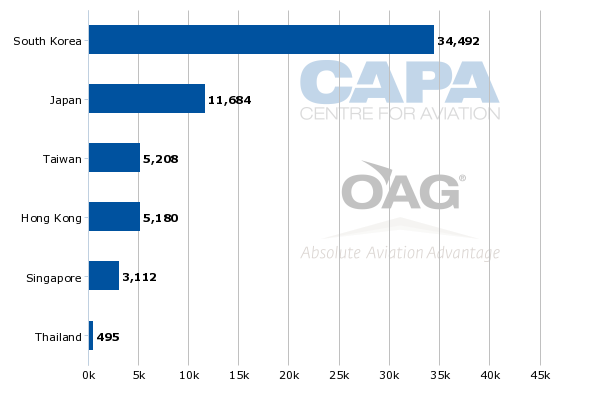 Qingdao bills itself as boutique carrier, but what exactly that means is unclear, as evidenced by one abstract statement from the carrier: "Boutique airlines does not mean we offer services to premium passengers only, but it means a higher quality we are pursuing." Such a vision is perhaps in contrast to the carrier offering upgrades to its premium cabin for a low price close to departure. While discounted or free upgrades may improve the passenger's experience, there will likely not be a similar impact on yields. That said, China's largest airlines are experimenting with discounted or free upgrades as the previous premium model weakens from an already shaky position. The entire premium strategy needs to change in China, and it appears the new airlines are following what has been done rather than be bold and try something new.

Zhejiang Loong Airlines, or Loong Airlines as it is known, first flew on 29-Dec-2013 from its base in Hangzhou, which is near Shanghai but boasts its own local market as well as a high-income population. Having launched earlier than Qingdao Airlines, it operates more routes. Loong is focused more on trunk routes (operating on four of Hangzhou's 10 largest domestic routes) and so sees single-digit marketshare on those routes, except Xi'an, where it has a 19% marketshare.

Loong's Shenzhen service is not ideal, with the return Shenzhen-Hangzhou sector arriving back in Hangzhou at forty minutes past midnight.

Loong has four A320s in service as of 06-May-2014, according to CAPA's Fleet Database. Two are reportedly owned by the airline while one is leased from Hong Kong Airlines and another from Hainan Airlines (a part-owner of Hong Kong Airlines). 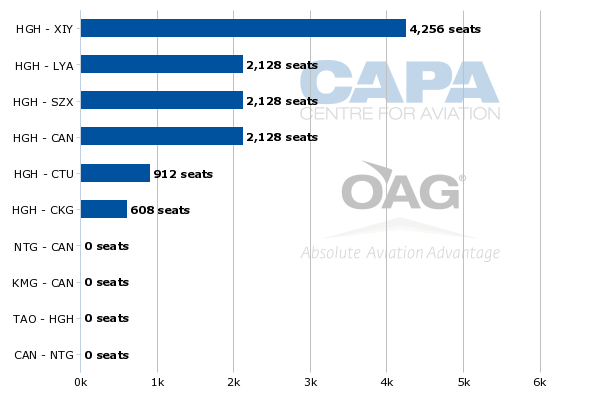 Loong's target market is destinations within four hours of Hangzhou. Local reports indicate it plans to expand to the far western cities of Urumqi, Xining and Zhangjiajie, as well as central/eastern cities of Beijing, Haikou, Guilin, Lanzhou, Nanchang, Nanning, Sanya, Shijiazhuang and Xiamen. The overwhelming majority of its current passenger flights are on flights under two hours. 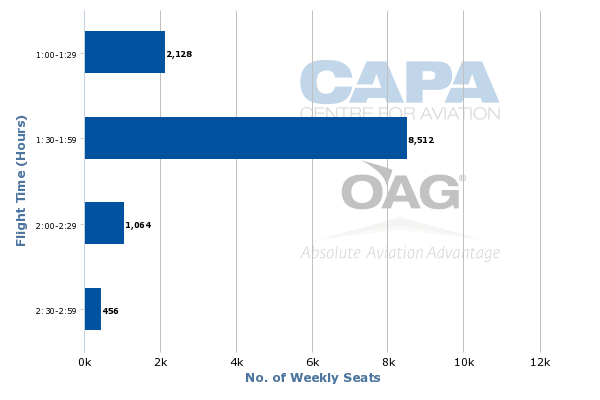 Loong is still smaller than Hangzhou's ninth-largest carrier, Shenzhen Airlines. While Loong can be one of Hangzhou's largest carriers, existing carriers will dominate the market for some time to come. 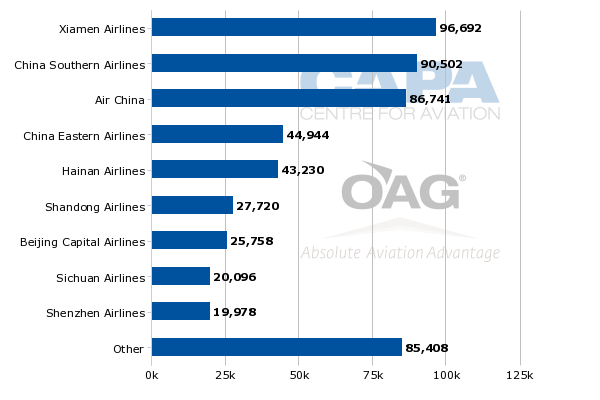 Of Hangzhou's top 10 domestic routes, Loong serves the second, third and fourth largest routes from Hangzhou (Guangzhou, Shenzhen and Xi'an, respectively) as well as ninth-largest (Chengdu) but is not (yet) on the largest route, Beijing. 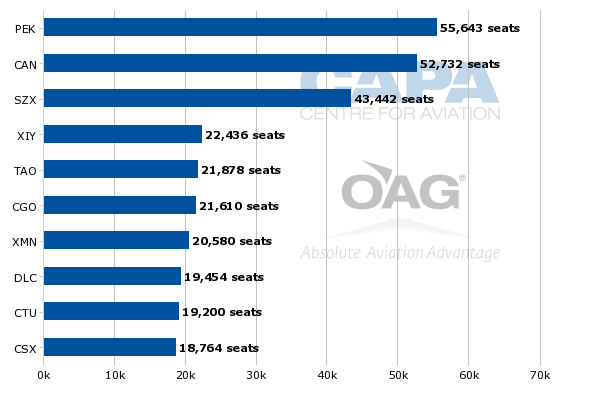 Donghai Airlines launches in prosperous Shenzhen, beating Spring Airlines to a base

Donghai Airlines has been operating as a cargo company since 2002 and received regulatory approval in Dec-2013 to commence passenger services from its home at Shenzhen. Shenzhen is a prosperous city and Spring Airlines has sought to establish a base there, but appears to be moving away from that idea due to limited slots. Donghai is the first privately-owned carrier in Shenzhen. In nearby Guangzhou Juneyao plans to establish a LCC, Jiu Yuan/9 Air. Donghai's logo is a nine colour seagull.

Its current sole passenger aircraft is a 737-800 leased from ILFC, one of four it intends to lease from the lessor. Donghai expects to take five or six aircraft annually and have 29 737-800s by 2020, a less ambitious fleet projection than other start-ups (this could very well be revised).

As with other start-ups, Donghai Airlines can expect to be one of its airports 10 largest carriers, but one of the top few rankings will likely continue to be held by incumbents. 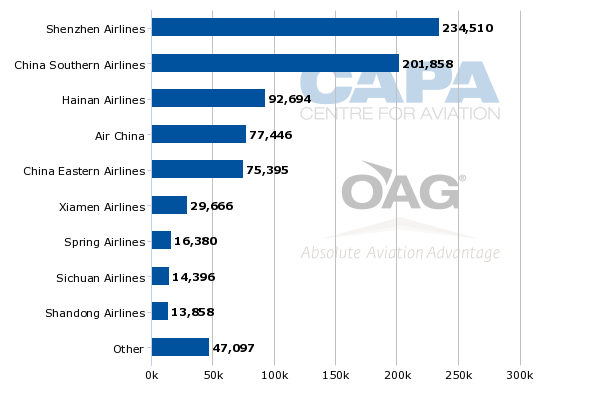 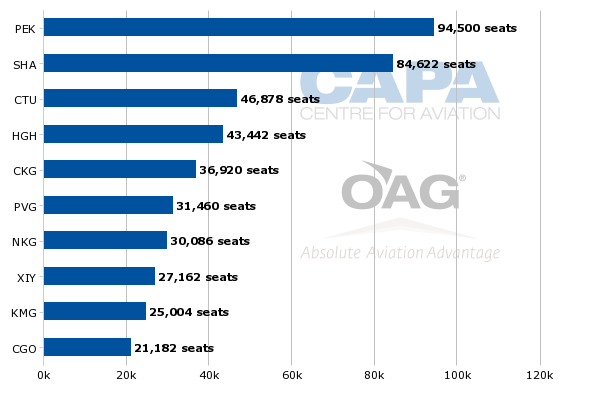 And now a dozen more airlines will launch in 2014

The steps for these new carriers in the large – and soon to be largest – domestic market may seem small, but no doubt they are platforms for growth. Of course, launch and survival are different matters. Private carriers from past decades have had difficulty being approved to operate their desired fleet sizes. Like Loong's Shenzhen service, most private carriers have had major difficulties in securing slots as an entrenched environment works against them. This is a difficult market.

It is too early to draw conclusions, but so far the carriers are changing the shape of the limited markets they operate in. They mostly seem to be focusing on sheer growth rather than strategic or sustainable growth. China has a history of new entrants – in any industry – replicating competitors. Few innovate, in contrast to new entrants in other markets: JetBlue, Virgin America, Virgin Blue/Australia, easyJet. While this can work and is a smart approach to those unfamiliar with the industry, it has limits. Those limits will likely be quickly found now that China is gradually restructuring its market. While the lack of reform so far has held back innovation, it has not held back entire innovation, as witnessed by Spring Airlines.

More examples – and perhaps the occasional failure – are to come as a dozen other airlines hope to launch in this embryonic time. It can be exciting but also worrying.

See related report: 15 new passenger airlines to launch in China. Though small in size, they will rattle the status quo