15 new passenger airlines to launch in China. Though small in size, they will rattle the status quo

China in the next year could see about a 50% increase in its number of passenger airlines. There are 15 known airlines that either plan to launch or have launched in recent months. This rapid growth comes as China loosens restrictions on new carriers that have been in place since mid last decade. These new carriers join about 10 airlines launching in other parts of Asia in 2014. Whereas those 10 airlines outside of China are exclusively low-cost carriers, almost all of China's new carriers will be full-service – at least initially.

There is a wave of LCC interest in China accompanied by some regulatory liberalisation, such as on minimum fare pricing. Yet there are more policies that need to be loosened or streamlined, and then upheld in practice. While there is large growth in the number of airlines, their size will be small. Recently-launched Loong Airlines has about 12,000 weekly domestic seats compared to China Southern's 1.7 million. But there will be impacts in the specific markets these new airlines operate in. Their ultimate, long-term potential with a new business model or one free of legacy weight is the larger worry for the country's incumbents, including the behemoths, which are among the world's 10 largest airlines. China's major airlines have been publicly quiet on this market re-ordering but are closely watching it, and planning their own response.

In late 2013 there were about 25 scheduled passenger airlines in China. (This number is actually subject to interpretation as some airlines fly under a parent company's code.) From late 2013 to Apr-2014, three airlines entered the passenger market: Loong Airlines, Donghai Airlines and most recently Qingdao Airlines on 26-Apr-2014.

There are a further 12 known airlines hoping to launch by the end of 2014, collectively giving China 15 new airlines since late-2013. The proposed carriers' readiness varies from still awaiting approval to planning a first flight in the next few weeks.

Of the 15 new airlines launching, four airline groups will continue to dominate

While China may experience a 50% growth in its number of airlines, top-level market share among its main groupings will remain intact.

In Oct-2013, 89% of domestic seat capacity in China was held by four airline groups:

Of the remaining 11% of airline seat capacity, just under half was held by Sichuan Airlines, which has direct/indirect stakes from Air China, China Eastern and China Southern.

So only about 6% of seat capacity was held by unaffiliated airlines. (More up to date data is not yet possible as some new airlines have not filed schedules.) Source: CAPA - Centre for Aviation and Innovata
Note: Excludes carriers that fly under another carrier's code, such as Dalian Airlines flying under Air China's CA code.

Many of the new or proposed airlines are affiliated with an existing airline group, and that group is often HNA.

Entirely new and private carriers may thus not see a large impact in the overall market, as some have stated to downplay their impacts for strategic reasons. However, this ignores the specific city-pairs where the carriers will have impacts. Incumbents are worried about the long term given the growth potential for the new airlines, a few of which have announced orders for aircraft from Airbus and Boeing.

Start-ups have a targeted impact on specific routes. With time, the impact will grow, worrying the big carriers

Much discussion on the Chinese market centres on the state-owned big three (Air China, China Eastern and China Southern), which account for about three-fourths of the market. In this framework, even Spring Airlines is discounted from the discussion as its 30-plus aircraft and single-digit marketshare pales in comparison.

But such views ignore the importance of a local focus, such as Spring holding about a 10% share of the Shanghai market. Impacts extend beyond marketshare: Spring's mere presence, even small, on routes impacts incumbents' yields. And Spring specifically is having influence beyond its route map; regulator CAAC upheld Spring in 2013 as an example of efficiency, with the connotation China's other carriers need to emulate Spring's efficiency.

None of the new carriers is yet being paraded, but they are making small gains. On Loong Airlines' largest route, from its Hangzhou base to Xi'an, it has captured about a 17% share of seat capacity. This ignores yields and ultimate profitability, but shows that a six-month-old carrier with four A320s can quickly become a force to reckon with. Hangzhou-Xi'an is just one route, but Loong is young. 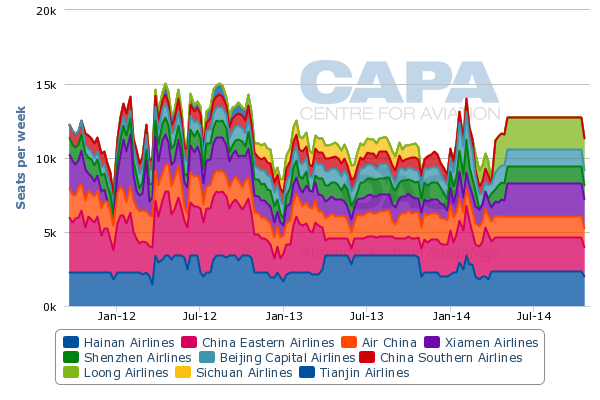 The atmosphere largely pervading incumbent carriers is that there are new start-ups and they are small for now; the issue is that their future potential is a threat. While the new airlines for the most part may not be based in first- or even second-tier cities, they will want to serve first-tier cities from their base, bringing new fronts of competition on numerous routes into major cities.

Incumbents see a slippery slope of one small airline today becoming bigger and being joined by many new airlines. Certainly, the entry of 15 new airlines over a single year raises the question how many more airlines are to come. While the current scenario may seem unsustainable since the multiple carriers fail to gain synergies, their local ownership in a specific city or province largely prevents consolidation - while possibly providing artificial support where unprofitability is outweighed by local economic and social interests.

In the long term, consolidation will be healthy. In the short- and medium term, airlines are rightfully seen as economic generators, and cities and provinces are itching to have an airline to call their own. It is a regional take on the epithet "You can't be a real country unless you have a beer and an airline."

The low-cost model is likely the end game. When and how remain the questions

There is seemingly a paradox of the CAAC regulator encouraging greater adoption of the low-cost model while most of the proposed new airlines are planning to follow something closer to the full-service model. Even one start-up, Qingdao Airlines, says it plans to be a "boutique" carrier, although the exact message of how it will deliver on that appears muddled. But perhaps one should not read too much into statements so early in a market where there is still much growth potential irrespective of business type.

Most insightful if anything from Qingdao's statement is perhaps what the "boutique" statement says about China not being as market- or strategic-oriented as elsewhere. With the exception of Spring and smaller initiatives from other carriers, the full service model is what China knows and has created support and regulations for.

China's mass market (excluding the relatively small premium sector) is largely extremely price sensitive and loyalty is almost non-existent. With a drive for lower fares in what is largely a short-haul market, low-cost travel is the obvious way for the future, just as it has been in so many other markets. Yet Spring Airlines, probably the only genuinely low-cost model,  will be the first to comment on the challenges it still faces.

Carriers like West Air transforming into LCCs see their job only half-done; further progress requires change from the regulator. The regulator meanwhile is cautious about unleashing its own dragon, and faces pullback from incumbents.

Since late-2013, China has announced reforms to better support start-ups and LCCs. As CAPA previously wrote:

When CAAC vice-administrator Xia Xinghua proclaimed “We urgently need to develop LCCs” at a public forum in Beijing on 5-Nov-2013, it became clear that fundamental changes are on the way for low-cost carriers and the overall aviation market in China.

Within the overriding goal of ensuring stability for the Big Three Chinese flag carriers, it will not be a simple process. One thing is very clear however: the CAAC is serious about introducing significant change in the sector. This includes approving new carriers, reforming airport charges, introducing LCC terminals, changing aircraft acquisition processes and taxes, not requiring approval for new routes, and the ever-topical matter of airspace reform (albeit largely outside its control).

The forthright move is part of a wider commercial agenda of China's new leadership, which meets again on 9-Nov-2013, seeking to find the right formulas to allow greater play of market forces, while maintaining appropriate regulatory backstops. Purists will see this as being half pregnant. For example, in Oct-2013 the CAAC abolished minimum pricing requirements in the domestic market, an important step for LCCs; but price caps remain as a consumer protection measure – despite total price freedom being integral to LCC structures.

But China has repeatedly shown the ingenuity to evolve tailored solutions that fit the very different environment in this enormously complex country. There will be a "China solution" and it will allow more LCC operations – but there will be differences

While the reform initiatives have been formalised, they remain subject to interpretation and implementation.

Airlines looking to become LCCs are also finding the reforms, while significant, are only a start and much more loosening of the reins will be necessary. To start with, airlines are unclear if new initiatives taken in the market will require approval for each airline, and if initiatives must be individually approved. This sort of uncertainty and any lack of procedural transparency can very quickly stifle the innovation and agility LCCs use to succeed.

Outlook: start-up victories will be small, but are important steps

Even if all 15 – or more – proposed airlines launch, they will have a small overall capacity impact in the short term. In some cases they will make tangible gains on certain routes, but overall will still have a minority position; Loong Airlines for example is not even one of the nine largest carriers in the city (Hangzhou) it is based in. That will change with time, but more important for the present is the impact these new airlines have merely by virtue of their existence.

Incumbents do not need to be told of the rapid growth efficient airlines like LCCs have had in other markets. It is well accepted that China's market must and will change, with market share slowly redistributing across other carriers, and with LCCs having a much larger role. Impacts on existing businesses could in the long-term be profound.

The seeds now being sewn that will bring about this change. An exact timeframe for this shift and its impact is difficult to predict, but with the CAAC embracing the concept of LCCs, the expectation is that once it starts the change will happen very quickly.

While state-owned carriers are hardly bastions of efficiency, along with their market power they have an early start over these new entrants in studying the low-cost model.

Having launched, the challenge for the new carriers is surviving today and already planning for a very different tomorrow. Airlines will be cautious of experimenting for fear of failure, but this is a necessary step for adaptation. In China's unique market, that adaptation does not need to be prescribed on the same lines as the world has already seen. China's airlines can create new solutions. And, like Spring, the bold will break from the pack.