China Southern jumps most in more than a year on strong yuan; Cathay also gains

Shares in China Southern Airlines rose the most in more than a year (since May-2009) in Hong Kong trading as a strengthening yuan pared the repatriated value of dollar-denominated debts.

Yuan forwards rose toward a two-year high with the stronger Chinese currency helping the nation’s airlines by reducing the cost of dollar debts built up from purchasing Boeing and Airbus aircraft, as well as other expenses such as fuel. China Southern had CNY66.6 billion (USD10 billion) of debt at 30-Jun-2010, with the carrier’s US dollar-denominated borrowings amounting to USD3.3 billion.

Shares in Cathay Pacific also gained strongly yesterday, up 6.5% to HKD22.80. IFR yesterday reported that Credit Suisse as sole bookrunner has launched a 40 million share selldown in Cathay at a fixed price of HKD21.50 which is 5.7% discount on yesterday's closing price. The selldown is by an undisclosed seller who is looking to raise HKD860 million (USD110.5 million).

The carrier also welcomed the commitment made by Hong Kong SAR Chief Executive Donald Tsang in his policy address that the Government would strive to enhance Hong Kong's status as an international centre for financial services, trade, shipping and logistics, so as to better leverage its unique advantages and functions during the National 12th Five-Year Plan period. Cathay Pacific also welcomed the midfield expansion project at HKIA which begins next year and will increase capacity and ease congestion. 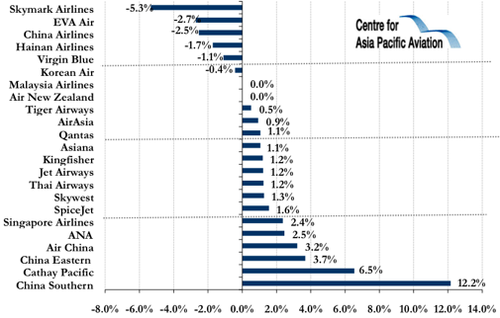