China Southern Airlines staged a solid turnaround in profitability in 2009 on the back of a recovery in domestic demand and considerable government support. However, yields (particularly in international markets) remained under severe pressure and many non-fuel cost lines rose. The airline reported an operating profit of USD210.9 million in the 12 months to 31-Dec-2009, compared to a loss of USD827 million in the previous corresponding period, despite a 0.9% reduction in revenue, to USD8,027 million. 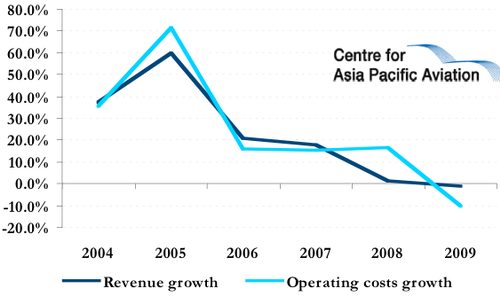 Back in the black, thanks mainly to fuel, government support policies 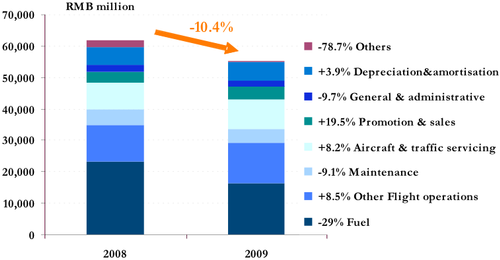 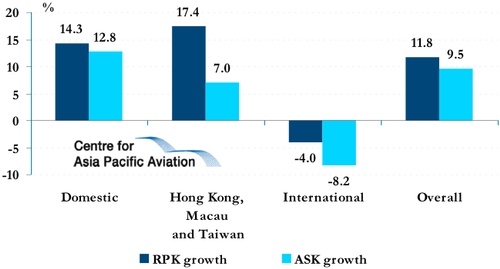 The result was also aided by a RMB1,328 million (USD195 million) refund from Beijing from the CAAC infrastructure development fund for the period from 01-Jul-2008 to 30-June 2009, which was refunded during the year and treated as 'other net income' in the profit and loss statement.

The net result considerably below market expectations of a CNY500 million profit, but the carrier’s shares closed slightly higher on the day of the results announcement (12-Apr-2010), on expectations the government will allow the local currency to appreciate, cutting the value of the carriers’ considerable foreign currency denominated debts (see Outlook section below). 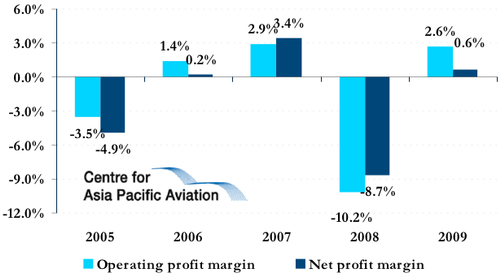 The turnaround is attributable to a resumption of strong passenger traffic growth (+13.8%) in 2009, after a pause in 2008. Cargo volumes remained muted. Indeed, China Southern delayed its proposed cargo JV with Air France due to the global financial crisis. Chairman, Si Xianmin, stated in early Apr-2010 that the carrier is currently seeking a cooperation partner for its cargo subsidiary, including a business or investment partner. China Southern is at an increasing disadvantage to Air China in the cargo segment, following the Beijing-based carrier’s signing of an agreement with Cathay Pacific to establish a Shanghai-based cargo joint venture. 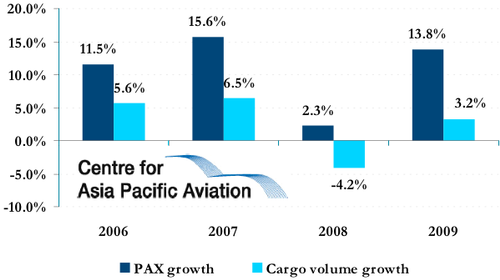 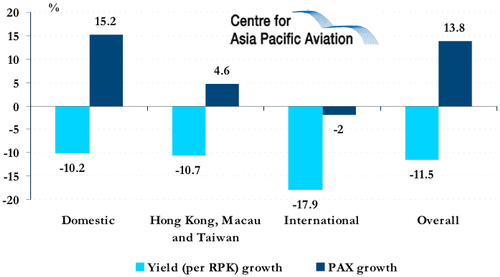 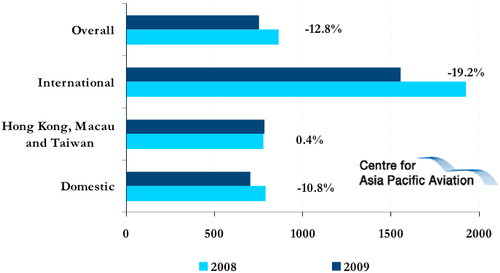 China Southern Airline boosted profits more than five fold in the three months ended 31-Mar-2010 (1Q2010) with the carrier benefiting from a 15% year-on-year increase in passenger levels as the aviation market rebounded, as well as the CNY1.6 billion (USD234 million) sale of its 50% stake in MTU Maintenance Zhuhai Co.

Source: Centre for Asia Pacific Aviation & China Eastern
*Based on the exchange rate: 1 CNY = 0.146497 USD
^ Compared to an operating loss of USD101.4 million in the previous corresponding period

Net profits increased 539% to USD207.9 million in the quarter for a net profit margin of 8.4%, the highest margin in over five quarters. The carrier, meanwhile, returning to profitability at the operating level with an operating profit of USD217 million. However, without the proceeds of the stake sale, China Southern would have been loss-making in the first quarter.

The carrier reported a 31% increase in revenue in the quarter to USD2.5 billion - the highest level in over five quarters. China Southern also retains the position as the largest revenue earner among the ‘Big Three’ carriers. China Southern’s operating expenses were up by a lesser degree, increasing 21% to USD2.4 billion. 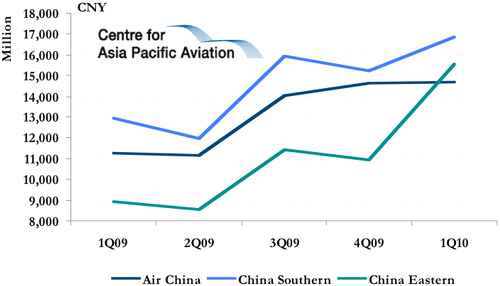 Total assets increased 5.9% in the period to CNY100.3 billion (USD14.7 billion) with owners equity up by 13.7% to CNY11.8 billion (USD1.7 billion). The company’s Board, on 08-Mar-2010, approved the placement of not more than 1.8 billion new A shares to investors including China Southern Air Holding Company (CSAHC) and the placement of up to 312.5 million new H shares to Nan Lung Holding Limited. The placement remains subject to approval of shareholders and China Securities Regulatory Commission.

Shareholder structure: as at Mar-2010 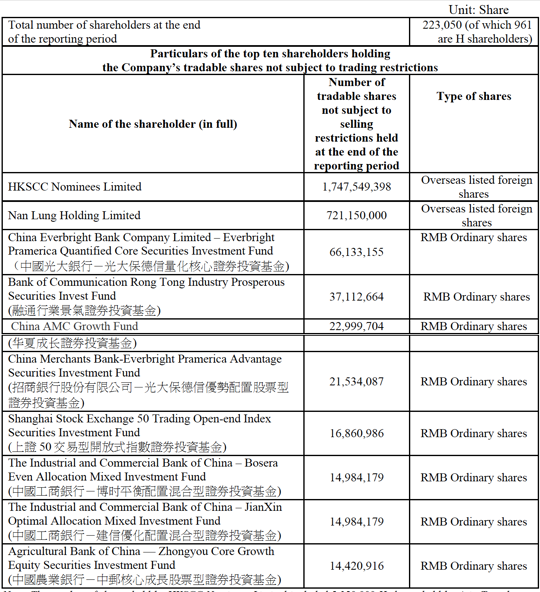 Looking forward, CFO, Xu Jiebo, stated the carrier expects a CNY500 million gain in foreign exchange for each 1% the local currency strengthens against the US Dollar.

China Southern also expects sales, passenger traffic and cargo volumes to grow by more than 10% in 2010, with Mr Xu stating, “our domestic market volume has already surpassed the pre-financial crisis level”. The airline will expand its fleet to 412 aircraft in 2010, up from 378 at present.

China Southern is confident that conditions will continue to improve in 2010. It stated, “given that the international financial market is becoming stable steadily, the Company expects to see a normal growth of the global economy under the recovery”.

The carrier added that, “driven by the proactive fiscal policy and moderately easing monetary policy, the domestic economy will also maintain an uptrend. Besides, the PRC government has put great efforts in economic restructuring, boosting the national income and stimulating the domestic consumption, which will make favourable conditions for the rapid and health development of the domestic aviation market”. China Southern concluded, “the Group is confident of ongoing improvement in its operating performance”.

China Southern enjoyed considerable government support during the 2008/09 crisis - and would have been unprofitable last year without the intervention. Moves by Beijing to ease or scrap the yuan’s peg to the US dollar would have a dramatic impact on Chinese airline profitability, as was the case during 2007, potentially providing the next round of (indirect) government assistance.