Chinese aviation often features "light switch" developments: the sector can fumble along and then suddenly, as if a switch is flicked, change mindset to an ambitious target and work tirelessly to achieve it. Such was China Southern's 2010 plan to focus on Australia/New Zealand. After having not even a daily service to Sydney, the relatively unknown Guangzhou-based airline is to have 55 weekly flights in 2015. And China Southern now looks likely to achieve the goal as the airline will 53 weekly flights to the region beginning in mid-2015. Increases over the busier holiday season could tip it past the 55 mark threshold.

The next challenge will inevitably be sustainability. China Southern's Australia/New Zealand capacity fluctuates more than other major Asian airlines, with its strong outbound-China market having sharp peak and off-peak seasons. Operating a full year of 55 weekly flights may be some years away. But there is no doubt the aviation and tourism markets are forever changed, with more to come. Not so long ago China was a small blip for Australia but now there are services from the Big 3 as well as two smaller carriers, along with a proposed JV between Qantas and China Eastern as well as Air New Zealand and Air China, developments hardly on the radar a few years ago. China Southern's international push – in Australia and beyond – has pushed international capacity growth from 19% to 31% of ASKs.

China Southern's growth in Australia and New Zealand will reach a record peak of 53 weekly one-way flights in Jul-2015, according to OAG data. This excludes short periods like Chinese New Year when capacity surges (56 weekly scheduled flights for one week in 2014 and 59 for one week in 2015).

Most notable about China Southern's 2015 growth is the extension of its peak season. In past years capacity typically peaked sharply from November to February and then decreased significantly. In 2015, the peak ended about the same time as in 2014 and 2013. But instead of starting up again in November, this year it will do so in July.

There is a planned decrease around Oct/Nov-2015 but this could change as China Southern's schedule is further updated. Alternatively, China Southern may find the increase too much and decrease it. The airline has in the past curtailed growth after placing it into the market. 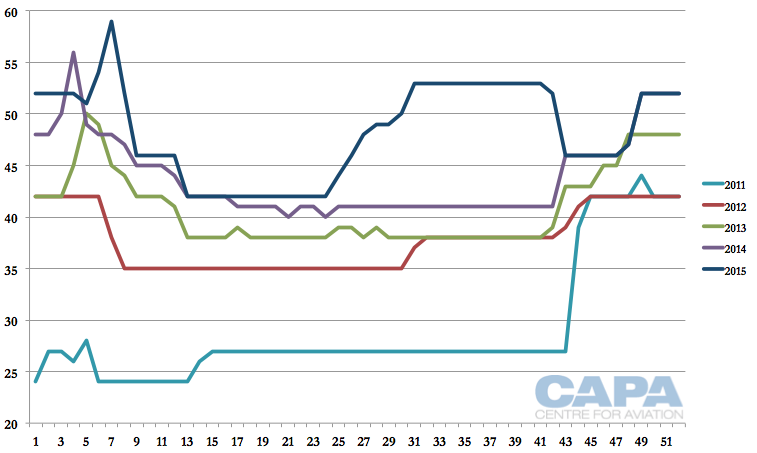 Not all of this capacity is intended for inbound tourism to Australia. For many years, Chinese airlines, have focussed on their domestic markets, neglecting the rich Australia-Europe pickings that have encouraged sixth freedom operations from Cathay Pacific, Singapore Airlines, Emirates, Etihad, Qatar Airways and numerous other intermediate airlines to offer around 1,000 flights (movements) each week.

That is slowly changing. China Southern has extensively marketed its presence and branded Australia-Europe connections via its Guangzhou hub as the "Canton Route" (Canton being Guangzhou's old name).

Despite this however, China Southern is mostly catering to the outbound China market, which is very seasonal, challenging full-year consistent operations.

China Southern, seventh largest in the region, has large variations in capacity

From late-2015, China Southern will be the seventh-largest carrier between Asia and Australia/New Zealand, surpassing Thai Airways. It is the largest of the mainland Chinese carriers but smaller than Singapore Airlines, which is the largest by far, followed by Qantas, Cathay Pacific, Jetstar, Malaysia Airlines and AirAsia X. 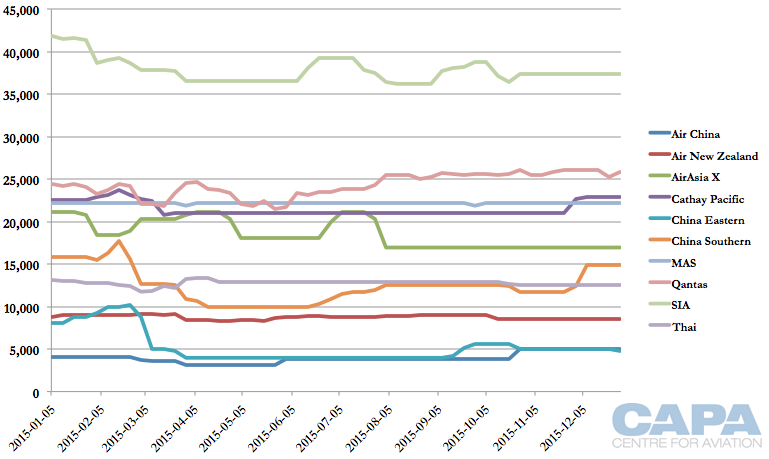 The largest variation in seat capacity during the year comes from the Big 3 mainland Chinese: Air China, China Eastern and China Southern. This is reflective of strong peak/off-peak periods. 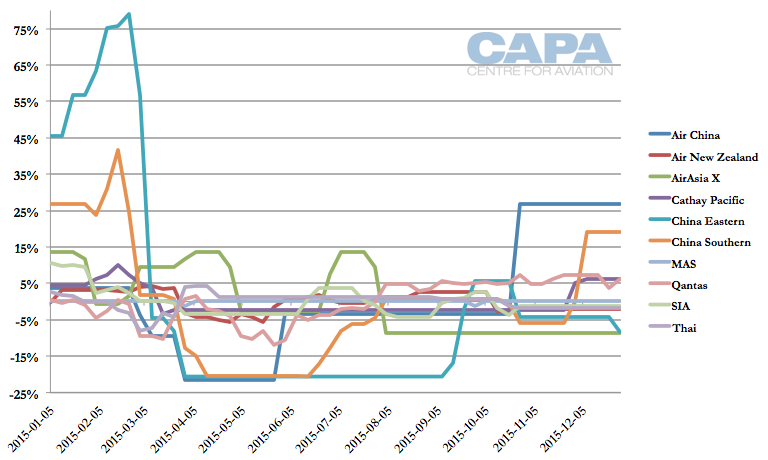 At Air China and China Eastern, there are also distortions from new growth that is disproportionately large since it is coming from a low base. China Eastern's peak (Feb-2015) capacity nearly doubles its annual average while off-peak capacity is 20% below average. Air China seems similar but with less extreme variations.

These cloud the variations of the bigger carriers, so in the graph below Air China and China Eastern are excluded. 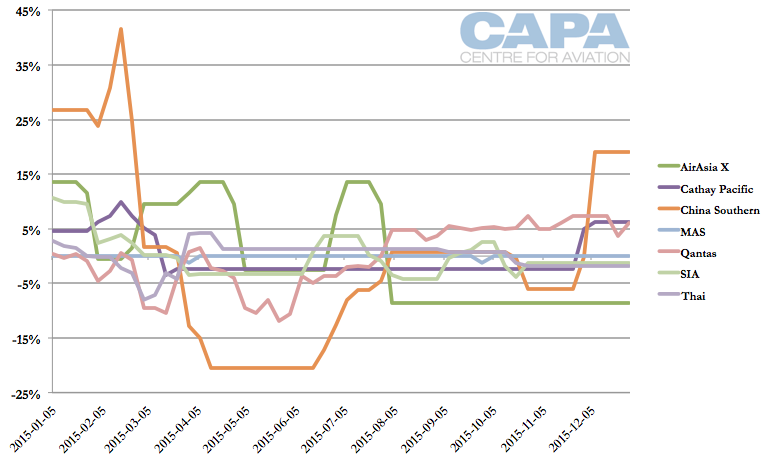 It becomes clear China Southern's capacity fluctuates most. The other airlines in the graph are network carriers (even LCC AirAsia X) with capacity seldom varying more than +/- 5%. One exception is AirAsia X, which is restructuring, leading to capacity changes.

Although China Southern's core market is outbound Chinese, it aspires to a better directional balance of traffic as well as sixth freedom traffic. Improved business/premium traffic would also be a benefit, but all of these objectives would likely require a more consistent schedule.

With the second half of 2015 being the first major period China Southern achieves scale (double daily services in key cities), it will be interesting to watch its development in the corporate/premium and transfer space.

The potential is not just volume growth but yield growth too. On the other hand, expanded capacity may pressure yields - although paradoxically it may also enhance yields in the medium term, if corporates can be attracted.

China Southern's growth in Australia and New Zealand has elevated the region from 2.4% of China Southern's ASKs to 6.3%, according to OAG data. China Southern has also increased its capacity allocation in other international markets, with the exception of the small Africa and Middle East market (but this will start to change in 2015 with China Southern's launch of Nairobi services from Aug-2015). 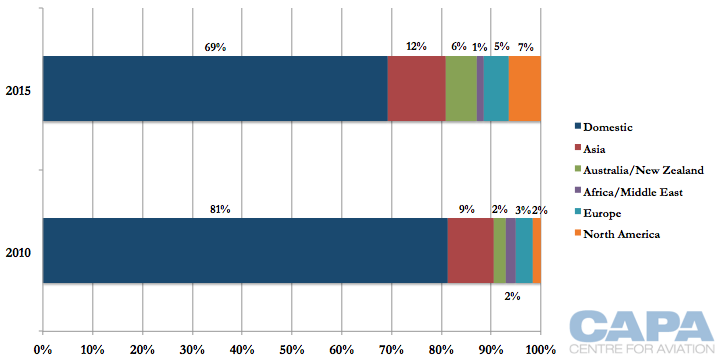 China Southern's system growth between 2010 and 2015 was 44%, according to OAG data. The domestic market came in under this at a comparatively "slow" 23%, although this is from a large base: China Southern is the largest domestic carrier in China.

Africa and the Middle East was also below average growth, while all other international markets were above average, including 283% growth in Australia/New Zealand and 461% growth in North America. The North America growth rate is so high because the base was low to start with. 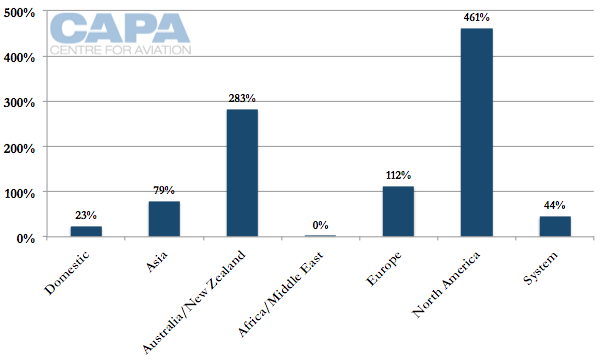 China Southern's target in sight – where to from here?

China Southern is closing in on its 55x weekly flight target. It needs to add two weekly flights. Further growth in Perth is perhaps unlikely in the short-term as China Southern is still spooling up. All of its other destinations in Australia and New Zealand are either daily or double daily, meaning China Southern would be looking at another daily service in existing markets or an entirely new destination. (It does not operate to Adelaide but has operated charters to Gold Coast and Christchurch, although more regular scheduled service could be challenging.)

Should China Southern not reach its target, its growth and impact is no less significant. As much as China Southern has changed the market, there have been other developments – perhaps some unexpected. China Eastern and Air China are showing renewed interest and forming JVs with Qantas and Air New Zealand respectively. Secondary city operators Sichuan Airlines and Xiamen Airlines are currently serving or will soon serve Australia.

China Southern has previously outlined it wants to slow growth and turn to achieving sustainability. It formed a codeshare with Qantas, but the Qantas-China Eastern JV is largely predicated on the two needing to combine their strength to combat a larger China Southern.

There is still much to develop strategically and in terms of growth. Large changes remain possible.

With China Southern's first growth target in sight, the next question is: Where to from here? By 2020, the airline could be a major force internationally.