Change in ownership position at GOL; worst is over for Southwest; Spirit pilot strike looms

Shares in Brazilian LCC GOL gained 4.6% yesterday, following a 3.4% reduction on 09-Jun-2010. AllianceBernstein and its affiliate AXA Investment Managers announced the acquisition on 09-Jun-2010 of 8.7 million preferred shares in the carrier, corresponding to 6.6% of all shares of such class. This is a minority investment that does not involve a change in the composition of corporate control or a change in the management structure of GOL.

In North America, Southwest Airlines CEO Gary Kelly stated that business travel took a "huge hit" during the recession, adding that it could take "several years" for business travel demand to recover from the "terrible" year in 2009. He added that the carrier's results have improved in 2010 compared with 2009 levels, stating, "the domestic airline industry is in much better shape now than it was a year ago".

Southwest pressuring Boeing for B737 replacement

Mr Kelly added that the carrier is pressuring Boeing to develop a more fuel-efficient next generation aircraft to replace the B737 (although he added that he does not expect to see it any time soon) and continued to maintain that the carrier has no plans to implement baggage charges.

He added that 90% of management's efforts are focussed on improving customers' experience. As part of this, the carrier plans to commence the installation of internet connectivity in its aircraft during 2010. The carrier also plans to launch international operations and implement unspecified upgrades to its rewards programme in 2011. Shares in Southwest gained 1.8% yesterday.

Also in the US market, ultra-LCC Spirit Airlines, which has reported ongoing labour troubles in the past few years, has cancelled some of its services ahead of an impending strike deadline from its pilots. The pilots have announced their intention to strike on 12-Jun-2010 if a contract negotiation cannot be reached with Spirit’s management. 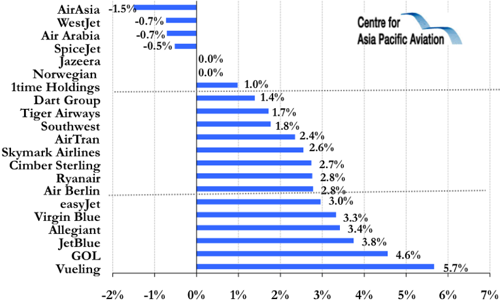