Philippine Airlines’ (PAL) shares jumped 5% on Friday, shrugging off a 1.2% fall on the Philippine Stock Exchange. It was PAL’s biggest daily gain since 24-Nov-2010 reversing a 10% slide in the stock after AirAsia announced plans for a local JV. The Philippine Board of Investments approved AirAsia’s plans on 07-Dec-2010.

Cebu Pacific slumped 3.6% on Friday to its lowest level since the 26-Oct-2010 listing. The stock collapsed by 25% in intra-day trade, reportedly due to a technical error in a sell order. Cebu Pacific’s shares have fallen around 15% since 07-Dec-2010.

OSK Research stated it is optimistic about AirAsia’s plans in the Philippines, noting, “although the associate was expected to be loss-making over the first few years, we are optimistic of the Philippines' long-term prospects”, adding, “We expect initial start-up losses of an average net loss margin of 10%, which will be rather minimal over the immediate-term as it will kick off with a small fleet.” 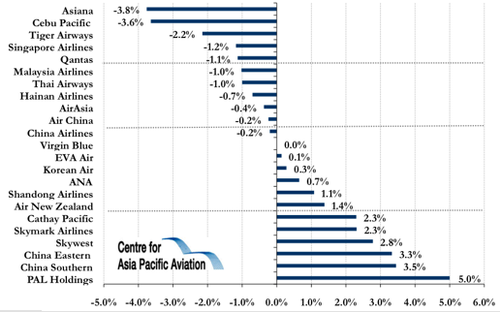 Source: Centre for Asia Pacific Aviation, Reuters and Financial Times
*It was public holiday in India on the 17-Dec-2010