Cathay Pacific CEO Tony Tyler stated premium revenues have not returned to levels seen before the global downturn, despite steady improvements over the past year and a “good pick up this year” in premium traffic.

Mr Tyler’s comments echo those of Lufthansa Board Member Stefan Lauer who said the carrier's average yield on European services was “still at or below the level of the crisis year 2009”. At the end of Sep-2010, Qantas CEO Alan Joyce similarly stated that while the carrier is seeing higher international yields of around 12-14%, it “still has a long way to go to get back to [pre-global financial downturn] levels”. He added that the carrier’s Asian yields are outperforming others, including Europe.

The comments by the individual carriers in the past fortnight echo those made by IATA in its Financial Forecast last month, in which the association stated that while there has been strong improvements in yields, they are yet to return to pre-crisis levels. A shift in the supply-demand balance will place pressure on yields again in 2011, with “gains likely to stall”. IATA is expecting yield improvements of 7.3% for passenger and 7.9% for cargo this year, following slumps of around 14% in 2009.

In China, shares in Hainan Airlines, China Eastern and China Southern gained 2.4%, 1.0% and 0.4%, respectively, with Air China 0.9% weaker. The carrier’s continue to benefit from a strengthened yuan (the value of the yuan reached a new high against the US dollar on 11-Oct-2010 of 6.6732 per USD) which reduces the cost of expenses such as fuel and aircraft purchases and debt and leasing expenses. China National Aviation Fuel Holding also announced that it has reduced the nation’s domestic aviation fuel purchase price by CNY120 per ton to CNY5,490 per ton, effective 01-Oct-2010, under directives from CAAC. 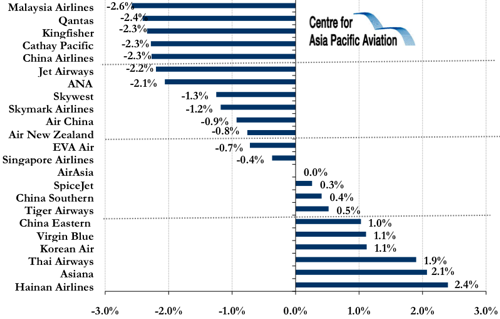