In 2006 and 2009 CAPA published a popular management report on Low Cost Airports and Terminals (LCATs). At the time, LCATs were very much in favour within the budget airline business as that segment grew rapidly worldwide.

Less than a decade on the Low Cost Carrier (LCC) segment is still growing, albeit a little less rapidly now as markets increasingly reach maturity, and as can be observed from the chart below.

Accordingly the construction of LCATs has slowed in some regions. Overall, while there some new LCATs on the planning board, the trend more recently has been and is to move away from building these facilities in some parts of the world.

CAPA's LCC Airports Congress, attended by some 20 CEOs of Asian LCCs and airports, is to be held in Bangkok on 15-Sep-2015. The full CAPA Low Cost Airports Report 2015 is available for download.

Introduction: LCCs and airports on a mutual evolution 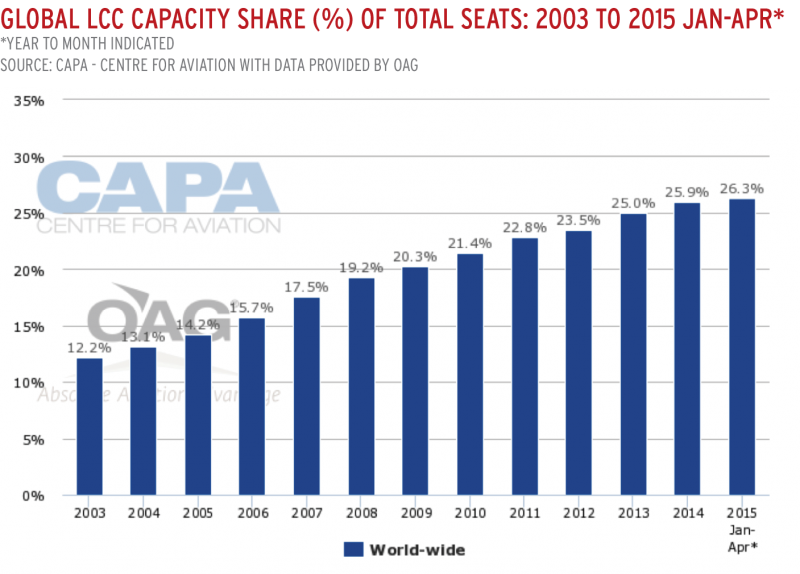 The justification for, and construction of, LCATs, has responded to changes in demand patterns during the last 15 years. For example, many of those referred to in the original edition of the report were conceived during a period of comparative economic boom, and when the main driving factor was the voluntary choice of air passengers to sacrifice comfort for price, both in the air and on the ground.

On the other hand it should not be forgotten that the low cost airlines (LCCs) that use them arose out of a quite different set of economic circumstances in the years immediately prior; circumstances that were dictated by the events of September 2001, after which demand for high-priced full service airline flights was greatly reduced for several years.

Hence infrastructural changes were often forced on operators of primary level airports, by both the new low cost subsidiaries of network airlines and by the new breed of independent budget airline.

The final piece of the jigsaw was the opportunism of previously neglected second and third tier airports, often situated outside the city limits, usually municipally owned and regarded as perennial loss makers, often hosting general aviation service only, or occasionally the military as well. But that opportunism demanded a quid pro quo. The new LCCs would only operate from these airports in return often not only for exceptionally beneficial arrangements on charging but also for financial assistance from the airport with marketing a route.

In these cases wider economic benefits were proposed by the airlines as the justification for the imposition of such conditions (i.e. more visitors to the community, spending in shops, tourist locations, restaurants and so on). The 'sell' must have worked - the queue to attract the attention of the main LCCs was a long one

But at the same time some of the early LCATs were doing no more than exploiting underdeveloped markets that had simply not been envisaged prior to the early years of the 20th Century, and to a degree that remains the case today. They were not coerced into doing anything.

The 'classic' characteristics of the low cost airline model

Aside from the first three points, all of the other factors are changing or have the propensity so to do. Contemporary characteristics are more often measured in terms of their degree of hybridity; i.e. the coming together of low cost and full service/network models. Indeed there is an argument that very few airline CEOs want to be seen to be managing specifically `full service' or `low cost' airlines any longer and that these descriptions are representative of a previous era.

The first LCCs, and the LCATs that supported them, came from Europe. Actually, the first identifiable domestic LCC per se was Southwest Airlines in the US, but the US has not really followed suit with LCATs, for reasons that will be touched on later. Internationally, many airlines could claim to have led the way. Amongst them would be Icelandair (as Loftleidir), originally operating out of Luxembourg via Keflavik Airport to the US in the 1960s; passengers changing aircraft on the tarmac in the middle of the night. But Icelandair's costs were not related to its ultra-low fares, and today Keflavik Airport is not known for low charges. (Even Ryanair, in its original 1990s guise, charged low fares but had such difficulty keeping its costs under control that it almost went out of business).

So Europe had a critical part to play in the development of LCCs and LCATs, and we shall return to it later.

But with the CAPA LCC Airports Congress in Bangkok on 15-Sep-2015, we begin with the low cost airline/airport industry relationship in Asia.

Why Asia's airports are interested in serving LCCs
•  60% of SE Asia seats are on LCCs;
•  There are many new airlines; mostly LCCs;
•  Intra-Asian traffic is booming;
•  Connectivity between LCC groups;
•  Asian growth markets are highly price conscious