In a report to be released by CAPA India, the Indian MRO market is projected to reach a size of more than USD2 billion by 2020, up from approximately US$800 million today.

The report highlights a number of drivers that will result in strong demand for maintenance, repair and overhaul services. Foremost amongst these is the rapid expansion of both the commercial and general aviation fleets. India’s scheduled airlines are expected to operate more than 1000 aircraft by 2020, up from 400 today. The positive outlook for the commercial sector was underlined by the confirmation of firm orders for more than 250 aircraft by Indian carriers at the Paris Air Show in Jun-11, with further orders expected over the coming months.

Meanwhile, the general aviation sector is expected to achieve even faster growth with the number of business jets, helicopters, turboprops and piston engine aircraft expected to climb from 680 to over 2000 over the next decade.

“The majority of commercial aircraft in India today were delivered after 2005 and hence heavy maintenance requirements have to date been limited,” stated Kapil Kaul, CAPA CEO South Asia. “But more advanced checks will be coming up over the next few years. Not only does this create a growing demand for services, but it starts to push Indian aviation to a scale where it may be able to support more in–country maintenance centres.”

As can be seen in the chart below, India currently has a very young passenger fleet, with an average age of just 4.6 years (this excludes a number of older Air India aircraft which appear on the register but are now largely non-operational). The bars in red showing aircraft with zero and negative ages represent aircraft scheduled to be delivered during the next 4 years. 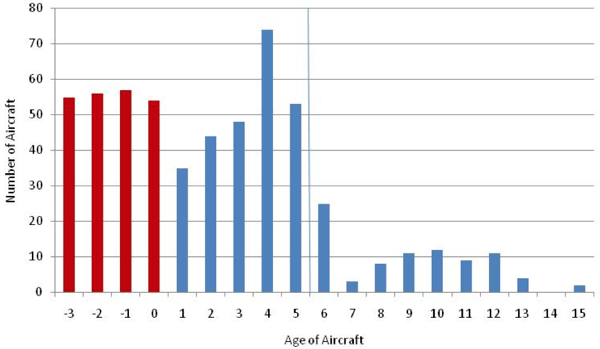 Over the next decade we expect to see an average of 52 aircraft per annum cross the threshold age of five years, at which time heavier checks become due. Assuming aircraft are retired at 15 years, the size of the Indian fleet aged 6 years or more is projected to grow from 85 today to 501 by 2020. 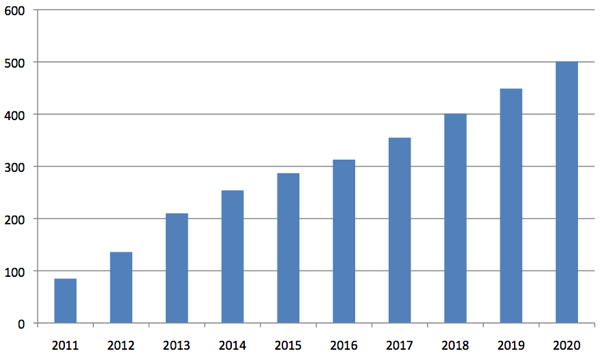 This represents a huge opportunity for MRO providers globally but could also lead to the development of new maintenance facilities in India. India’s large pool of engineering graduates earning relatively lower salaries compared with their counterparts in developed markets could potentially provide a competitive advantage. However, the availability of resources with specialised skills in aircraft maintenance remains low and significant investment in training would be required. These may be given a fillip if India proceeds with plans to develop an indigenous manufactured regional aircraft.

Furthermore, regulatory and fiscal hurdles exist, the sales taxation structure for example is discriminatory against third party providers of maintenance services compared with in-house activity. However, over time, and with appropriate lobbying and will from the industry, these challenges are surmountable.

CAPA is at an advanced stage of researching the direction and prospects for the market, based on a combination of data analysis and extensive engagement with airlines, maintenance organisations and government to a level which not previously been conducted in India. The India MRO Report 2011 will be released on 30 November 2011 and will analyse fleet profiles, airline strategies, regulatory and fiscal issues, infrastructure, competitors, skills requirements and employment prospects.

Early bird rates are available for orders and payments received prior to 31 August. To order your copy now, please download the order form (PDF) in the Attachments box at the top left of this page and return to us.