There’s been little indication from Canada’s government for a time to ease or change strict travel restrictions that have been in place since Mar-2020, when the COVID-19 virus began spreading rapidly worldwide.

Aviation stakeholders continue to stress that those prohibitions are creating significant disadvantages for Canada’s airports and airlines, and now WestJet is warning that Canadian operators are losing share to foreign competitors.

WestJet is also facing the reality that it is tough to determine what could drive the government to take a different approach on restrictions, and the company does foresee a reopening of the US border before the end of 2020.

Against that backdrop, Mr Sims continues to stress that testing and vaccines are key to jump-starting demand, which is crucial to reaching break-even cash burn.

WestJet warns that restrictions are driving share to foreign competitors

Canada’s borders have been closed since Mar-2020, and the prohibitions include blanket restrictions on all foreign travellers, the closure of the Canada-US border, and a mandatory 14-day quarantine rule for anyone entering Canada – including Canadians. There are also certain interprovincial restrictions in place.

Canadian airlines, airports and other stakeholders have banded together to urge Canada’s government to revisit those restrictions, but at this point there do not appear to be any immediate plans for changes.

Speaking at the recent CAPA Live October 2020 conference, WestJet CEO Ed Sims explained: “I suspect I understand why the government took the position that they took early on from a social welfare perspective. But it has left Canadian aviation very exposed over the course of the last seven months, and by our estimation between 15% to 20% market share has now moved from domiciled Canadian carriers in this country to foreign carriers.”

Data from CAPA and OAG show that WestJet’s system seats for the week of 19-Oct-2020 are down 74.5%, and Mr Sims has made public remarks that approximately 70% of WestJet’s fleet is essentially idle or grounded.

Future schedules are tough to predict, given the overall fluidity of the current operating environment, but WestJet’s seat capacity for the remainder of Oct-2020 will remain significantly down from 2019 levels, as the restrictions constrict international, and in some cases, domestic travel for Canadians. 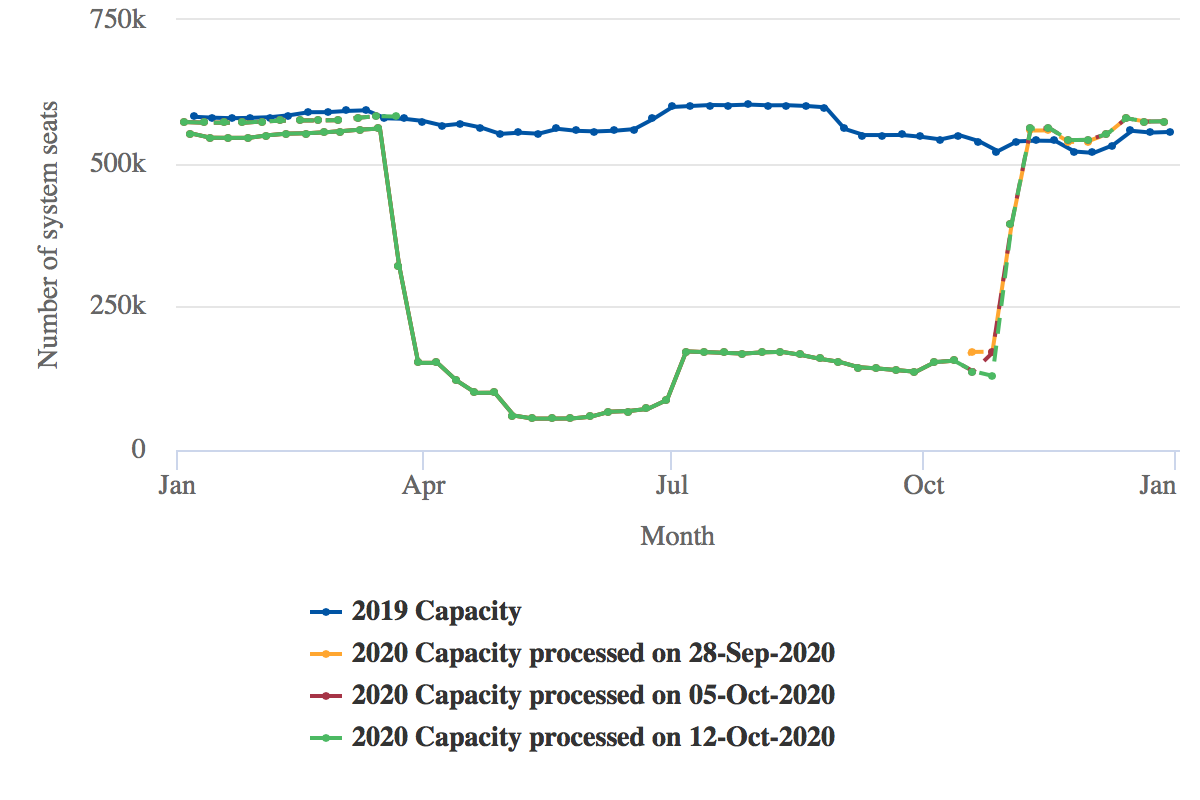 Mr Sims stated that it “is hard to know what is the trigger that will change the government’s perspective”, But he stressed that he believes having successful, rapid or PCR testing three days before travel and five days post travel is the best solution for removing quarantines.

Both WestJet and its rival Air Canada are conducting trials of COVID-19 testing on passengers, and Mr Sims said that testing and the commercial availability and distribution of a vaccine are the key elements to a recovery in demand.

Mr Sims said that there is a possibility that testing could come into full effect at all points in its network during 1Q2021. The timing of a vaccine is “much harder to determine”, said Mr Sims, adding that it could become available in 3Q2021 or 4Q2021.

The airline is also bracing for a prolonged closure of Canada’s border with the US, Mr Sims explained. He stated that border restrictions likely would not be reviewed until the end of 2020 or after the US presidential election in November. He also said that there is a great likelihood the border would remain closed until Canadians could be convinced that both COVID-19 spread and fatality numbers in the US had been reduced to an acceptable level.

“That clearly hasn’t happened, and I think the trigger will either be the US election or the inauguration of the president by the end of January. But either way it will be the end of the year”, he said.

The situation clearly presents a greater challenge for WestJet and other Canadian operators because during the colder months residents of Canada usually book trips to sun destinations in the US, Mexico and the Caribbean.

But Mr Sims said he suspected that as winter weather settled in, more Canadians, particularly those working from home, would take a chance on a 14-day quarantine on arrival back in Canada. “I suspect you’ll see more of that happening,” he said.

Similarly to airlines worldwide, privately held WestJet (purchased by Onex in Dec-2019) has been working to reduce cash burn and build liquidity.

Mr Sims said that the airline had done such a good job in slashing its cash burn that in some ways it allowed governments to say, “Well, they didn’t go bust, they’re still here, therefore we are vindicated in not giving them specific sector relief”.

He also noted that WestJet had taken 72% of fixed costs out of its business and shifted a significant proportion of fixed expenses to variable costs.

However, Mr Sims warned that if “we don’t see an uptick in demand, we’re going to have to look at more creative ways to generate financial flexibility to reduce cash burn”.

Canada's airlines play a waiting game for the lifting of restrictions

WestJet is taking the long view that it could be some time before demand returns to pre-crisis levels. At the same time, the airline is adapting to its new reality by preparing for widespread testing throughout its network – its aim will be to showcase the effectiveness of testing as a means to replace quarantines that are currently in place.

But it is difficult to determine when Canada’s government will adopt a mindset change, and time is of the essence for the country’s airlines as they work to remain competitive on a global scale.