US airlines are increasingly adopting a long term optimistic view, even as the harsh realities created by the COVID-19 pandemic force those operators to swallow a huge dose of short term realism.

In the current reality they face, airlines are celebrating small victories – what appears to be slow movement of demand trends in the right direction, and the shirking of gaping losses in revenue on a sequential basis.

And even as the general consensus is that it could take two years or more for traffic to reach pre-pandemic levels, American Airlines is bullish that it and its competitors have built up ample liquidity to survive the crisis – as long as demand steadily continues to rise.

Nearly eight months into the pandemic, airlines worldwide are bracing to be smaller for the foreseeable future as the return of demand to pre-COVID levels could take three years or more.

Speaking at the recent CAPA Live October 2020 conference, American Airlines CEO Doug Parker stated, “We’re all flying less than half of what we were a year ago in terms of network”, and he acknowledged that it is “going to be a long road back”.

Mr Parker said that American does not anticipate demand for air travel will return to 2019 levels any time in 2021, or a year to two after that.

American added capacity back at a faster rate than some of its competitors during the US summer high season in the Northern Hemisphere, but pulled back some of its supply as rising case counts in the country stunted the movement of demand off the bottom.

Data from CAPA and OAG show that American’s seat capacity will be down approximately 47% year-on-year at the beginning of Nov-2020. 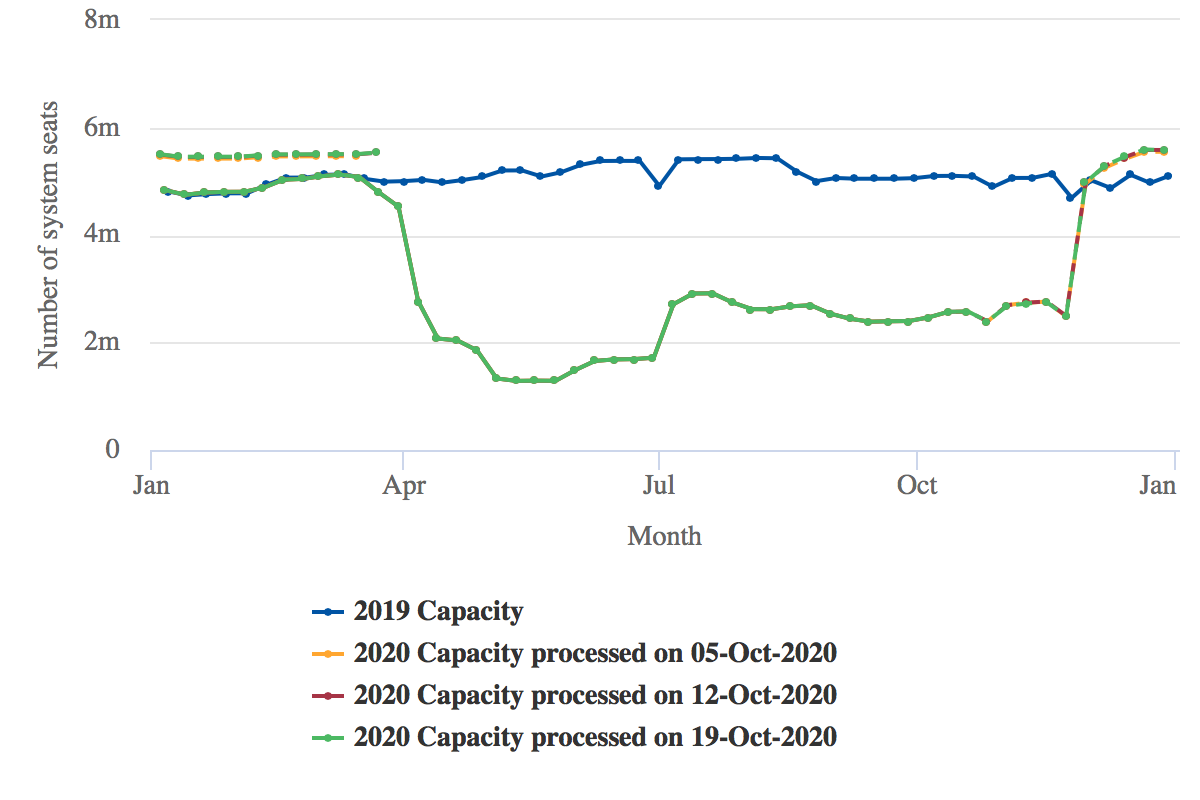 The airline’s revenues plunged by 85% year-on-year in 2Q2020, and should drop by 75% in 3Q2020. American is forecasting a 65% drop in 4Q2020. Mr Parker remarked that while those numbers are shrinking, they are still “horrific”, and not sustainable in an industry were 10% margins are the norm.

However, he is also bullish about the ability of many operators to weather the crisis, due to the enormous amounts of liquidity airlines have raised during the past several months. “No one is in danger of liquidity issues, irrespective of how bad things stay”, Mr Parker said.

Fitch Ratings has calculated that at the end of Jun-2020 American had USD10.2 billion in liquidity, borrowed USD1.2 billion in Sep-2020, and is eligible for up USD7.5 billion in loans from the US federal government.

“We’re seeing gradual demand increases, and as long as that continues the industry is in good shape for riding out the crisis”, Mr Parker said.

Obviously the liquidity that airlines have secured is coupled with a solid increase in debt levels, and American entered into the crisis with higher debt loads than its peers. Fitch expects American to end 2020 with a total debt balance, including lease obligations, of USD47 billion.

With business travel down 95%, and a recovery not in sight for two to three years, all airlines are doubling down on leisure travellers, which is the first sector returning to travel. And increasingly, it appears those customers are building up some level of comfort in air travel as the pandemic lingers on.

Those dynamics are intensifying competition for what still is a significantly smaller passenger base.

But Mr Parker believes American’s hub and spoke model provides an advantage, given the number of markets the airline serves. “It is not as though all of sudden we’re flying the same routes. We all have our own niches that are making a difference”, he said.

The ultra low cost airline Spirit has publicly stated that it has no concern about larger US airlines increasing competition in its markets, largely reasoning that its cost structure still makes the airline a formidable competitor.

Mr Parker did concede that at the moment “we’re hurting a bit more than those [airlines] that fly point to point domestically”.

However, he stressed that there will be a return of global air travel by passengers that want to visit both small and large markets, which will allow American to carry more revenue – albeit at higher costs. But once that rebound happens, American and other hub and spoke airlines will attract those passengers that point-to-point airlines cannot capture.

“There is enormous pent up demand for global air travel today”, Mr Parker said. “We hear it from customers all the time.”

Travel restrictions are precluding those passengers from travelling at the moment, and American’s CEO has the view that in an environment with constrained demand the global alliances can work together through joint ventures to decide which airline's capacity is the most efficient to be deployed until demand comes back.

For its part, American is attempting to do everything it can to encourage the US government and other governments to restart international services, said Mr Parker.

But in order for that to occur it appears that widespread testing needs to begin, and for the moment, airlines are only just starting limited trials of COVID-19 testing on passengers.

In many ways, airlines have no choice but to play the long game in the recovery from COVID-19. And American believes that it and other airlines have built a secure enough financial foundation to weather the worst of the crisis.

Of course, that financial wherewithal comes at a price, in the form of high debt loads that airlines need to start paying down sooner rather than later.