Being small and nimble is definitely a competitive advantage for airlines navigating the COVID-19 pandemic, and perhaps no other airline gives credence to that theory than the US ULCC Sun Country Airlines.

An optimally timed launch of cargo operations for Amazon, and a rebound in charter flights, have helped Sun Country start the process of rebounding a bit faster than larger airlines.

The company is not blind to the fact that US demand trends are being affected by rising COVID-19 case counts in the country, but Sun Country’s business diversification has become an asset during the pandemic.

During the recent CAPA Live Dec-2020 conference, Sun Country CEO Jude Bricker joined chief executives from many US airlines in declaring that “domestic leisure is by far the best performing segment of US passenger demand today, and that’s the predominance of our business”.

But to some degree a significant rise in US COVID-19 cases has had a dampening effect on demand for the US holiday season, and it is no different for Sun Country.

Mr Bricker explained that a travel advisory issued by Minnesota’s governor just before the Thanksgiving holiday resulted in increased cancellations and a decline in sales, but generally “traffic held up better than I expected.”

Although trends for the Christmas season are softer than the airline expected, “that isn’t to say things can change rather rapidly”, said Mr Bricker. “One of the circumstances of this crisis is that bookings are happening much more close in than what we’ve ever experienced, and so the predictability of close-in demand is difficult, so I’m still really positive about where we are.”

The chief executive of Sun Country stated that seats had been cut by approximately 40% year-on-year in the Minneapolis-St Paul twin cities market. For Minneapolis St Paul, data from CAPA and OAG show a 37% decline for the week of 14-Dec-2020.

Minneapolis St Paul International airport is a hub for Delta Air Lines. CAPA and OAG data show that Minneapolis represents approximately 7% of Delta’s weekly seat deployment among its top hubs and bases as of early Dec-2020. 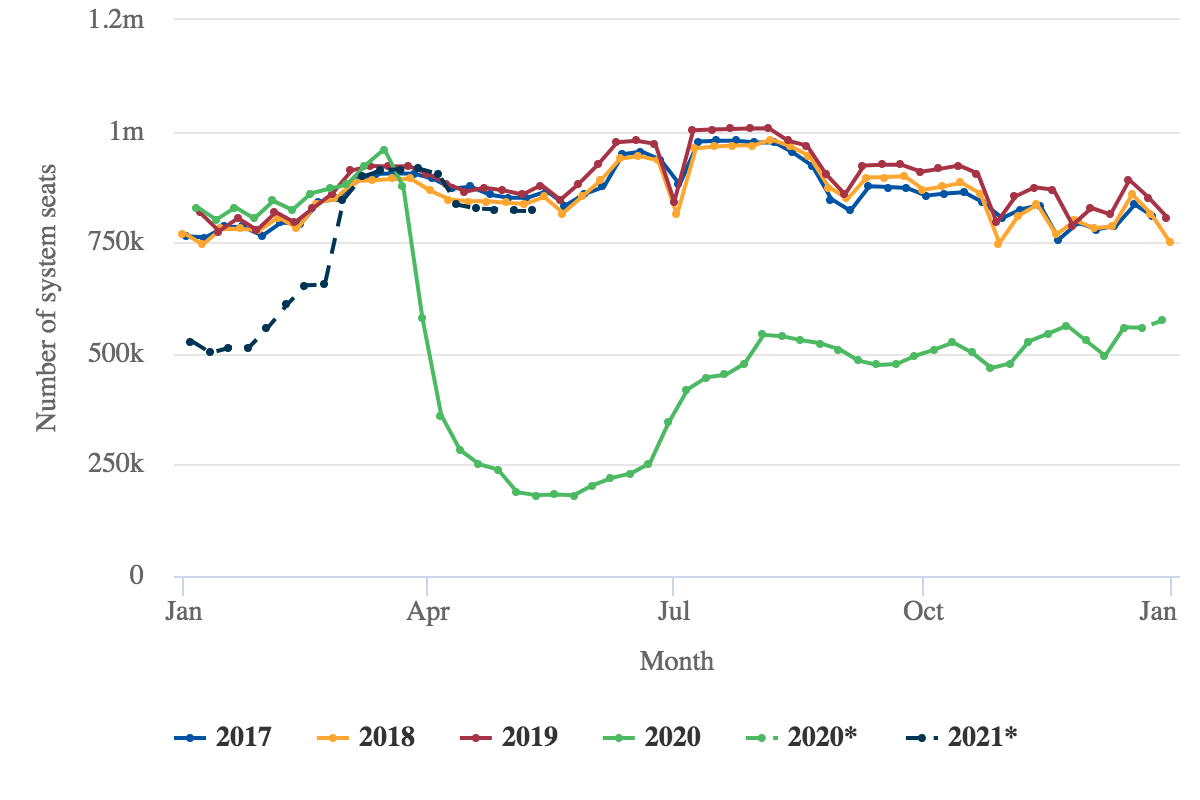 * These values are at least partly predictive up to 6 months from 14-Dec-2020 and may be subject to change.

Mr Bricker said that it was fortunate that operators had been rational in their capacity deployment from Minneapolis-St Paul market. He added that Sun Country’s ancillary sales per passenger were higher than “this time last year”.

Sun Country’s load factors are approximately 60%, “which is really a function of our ability to manage capacity close in, and fares are down in the teens level; all in all, with fuel prices being equal, that’s a pretty good outcome for us,” Mr Bricker said.

Another positive outcome for Sun Country was the timing of launching cargo flights for Amazon in Apr-2020. The airline operates 12 Boeing 737-800 freighters for the online giant, and Mr Bricker stated that at present Sun Country is operating approximately 1,000 cargo flights per month.

Cargo has helped many airlines blunt some of the deep declines in passenger revenue due to the COVID-19 pandemic severely affecting passenger demand.

Sun Country’s cargo operation represents broadly one third of its flying, said Mr Bricker, and it is “clearly the best thing we have today financially.”

He remarked that Sun Country’s core business of transporting leisure passengers to their destinations would remain intact once the pandemic is over. Cargo helps Sun Country supplement its passenger business by creating opportunities for the airline to deploy crews in a productive way in the off-season, he explained.

Cargo needs to represent between 20% and 30% of Sun Country’s operations to optimise that balance, Mr Bricker said.

If there’s an opportunity to expand cargo operations, “we will certainly look at [that],” said Mr Bricker. But he added that given that Sun Country competes with other express carriers to gain business, it is “beyond our control.”

The airline also believes that its charter operations “are coming back strong,” which is helping Sun Country’s recovery, Mr Bricker noted.

During the pandemic Sun Country has launched an all-first class service from a Los Angeles fixed based operation (FB) to Kona that is performing well, said Mr Bricker, adding that the airline was considering expanding that operation. He noted that the clientele using the service could access COVID-19 tests at the last minute, and they mostly have second homes in Hawaii.

All things being relative, Sun County is in reasonably solid financial shape

In the current pandemic environment, with all things being relative, Sun Country appears to be in reasonably sound financial shape. With the help of the Coronavirus Aid Relief and Economic Security (CARES) Act, Sun Country is profitable year-to-date, Mr Bricker said. Those CARES grants expired at the end of September, and now “without that we are cash flow neutral”, he explained.

“I don’t know how the first quarter is going to go, there’s so much uncertainty”, Mr Bricker stated. “But we’re feeling pretty good about things.”

Although it is tough to predict whether Sun Country will be able to sustain its cash neutral status – in this environment that is an admirable accomplishment. There is no doubt that the launch of the airline's cargo operations has helped dull the blunt decline in passenger revenue it has experienced since the onset of the COVID-19 crisis.

Sun Country, which has recently transitioned to the ULCC model, has never aspired to become a large player in the US market; rather, it was focused on a specific sector of leisure passengers looking for affordable prices to their respective destinations.

A certain nimbleness allowed Sun Country to pivot to cargo in a fairly seamless manner, and the unexpected benefits of that new line of business have allowed the airline to achieve a level of stability that is welcome in the COVID-19 crisis.