Canada’s ultra low cost airlines – Flair and the WestJet subsidiary Swoop – still represent just a fraction of the country’s domestic capacity, but each airline continues work to attain their growth ambitions. Flair is in the process of adding newer generation aircraft to its fleet, and Swoop remains on track to grow its fleet from six to ten aircraft by the end of 2019.

Flair has had its share of ups and downs during the past year. It secured an important investment from a private equity firm and finished a compete rebranding that has included both a new livery and website. But the airline also abruptly cut some US transborder routes and experienced labour strife with its flight attendants.

Flair has also reportedly accused WestJet and Swoop of predatory pricing, which has spurred an investigation by Canada’s competition watchdog. It is not the first time an iteration of Flair has accused the WestJet group of attempting to stymie competition, and the latest episode shows competition in the ULCC space in Canada will only intensify.

The year 2018 was the year in which the ULCC model was fully incorporated into Canada after aspiring start-ups worked for years to make their debut.

Flair started life as a charter operator in 2005, and then in 2016 began operating scheduled services on behalf of the travel company NewLeaf. Then, in 2017, it acquired the assets of NewLeaf and started operating ultra low cost services under its own brand. Data from CAPA and OAG show that Flair’s ASKs grew nearly 15% year-on-year in 2018.

WestJet launched its new ULCC subsidiary Swoop in 2018 and presently the airline operates a fleet of six aircraft, providing nonstop services to a mix of 14 markets in Canada, the US and Latin America and the Caribbean. As of late Apr-2019, Swoop deployed 57% of its ASKs into the domestic market.

Swoop percentage of ASKs deployed into domestic and international markets: as of late Apr-2019 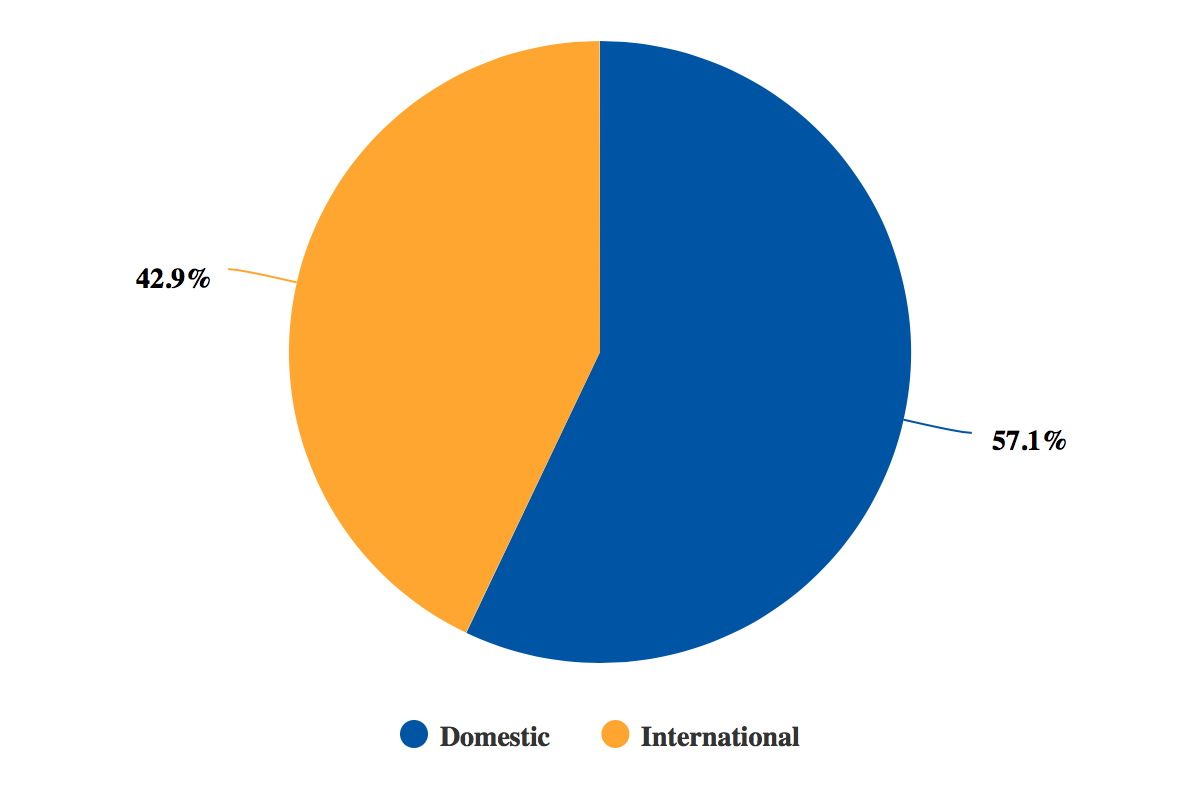 Combined, Flair and Swoop operate 14 aircraft, and their footprint in the domestic market remains small. Together, the two ULCCs represent 4% of Canada’s domestic ASKs.

Canadian airline percentage of domestic ASKs: as of late Apr-2019 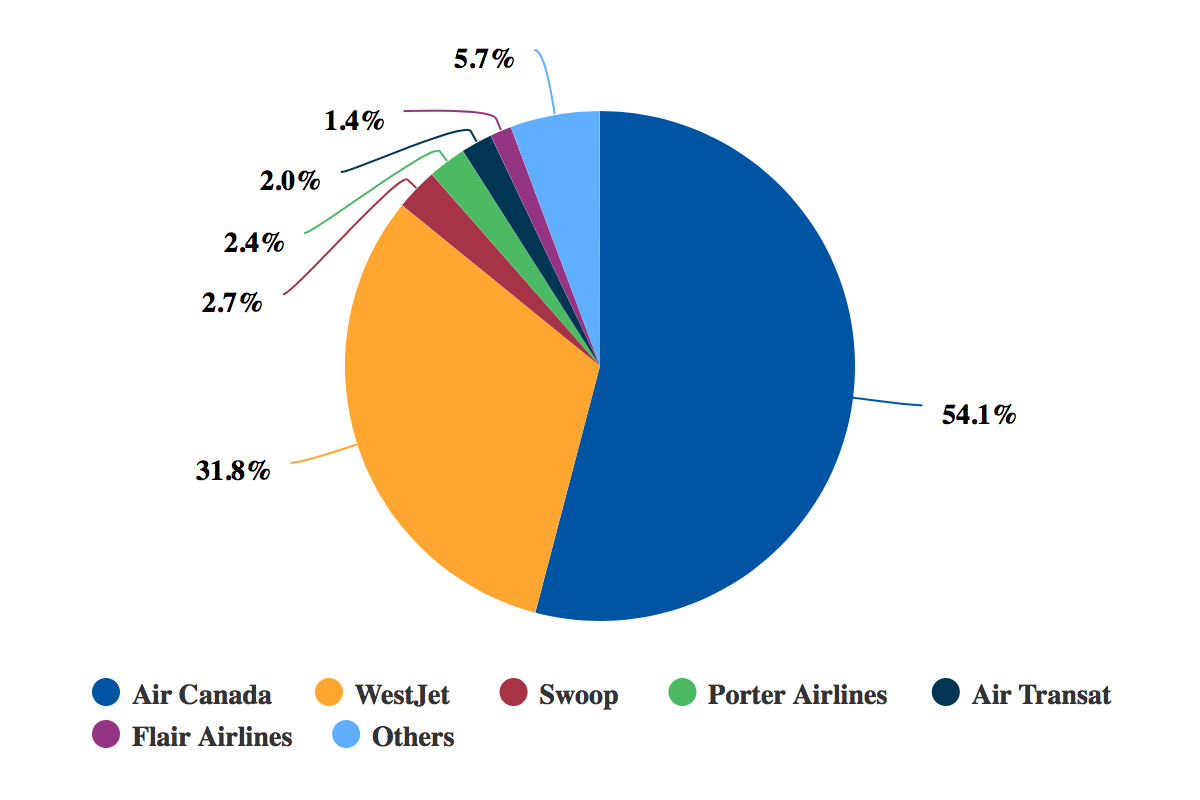 Flair has undertaken numerous changes during the past year

Flair has made several changes to its business during the past year, including moving its headquarters from Kelowna to Edmonton and undertaking a new branding campaign featuring the development of a new aircraft and the unveiling of a new website.

In early 2019 Flair announced that the US-based private equity firm 777 Partners had taken a 25% in the company, and Flair executives told Canadian news outlets that the company had felt as if the public did not realise that Flair has the backing from a large firm.

The airline has recently taken delivery of a Boeing 737-800 that was previously in service with Primera Air. That aircraft joins seven 737-400s in Flair’s fleet and the company aims to add four more -800s by the end of 2019.

Flair has also hit some headwinds in scheduling and labour relations

As it works to revamp its fleet and fully implement its new branding, Flair has also encountered some hiccups during the past few months.

The Financial Post stated that Flair had attributed the cancellations to disappointing load factors. Executives from Flair told the publication that predatory pricing from WestJet had cost Flair CAD10 million over four months. As a result, The Financial Post reported that Canada’s competition watchdog was investigating those claims.

It is not the first time WestJet and a low cost operator have had a dust-up. After NewLeaf announced plans to launch flights from Calgary and Edmonton to Phoenix Mesa, WestJet detailed its plans to debut service on those routes and NewLeaf cancelled its Phoenix Mesa flights before their planned launch.

Flair recently reached a collective bargaining agreement with it flight attendants, but before that there had been discord with that labour group. In Dec-2018 the company’s flight attendants almost followed through on a threatened strike action after hitting an impasse in mediated talks.

Swoop marches on towards its fleet, cost and ancillary revenue targets

Concurrently, Swoop is continuing its march toward a fleet of 10 737-800s by the end of 2019 and balancing out seasonal route additions with year-round offerings. 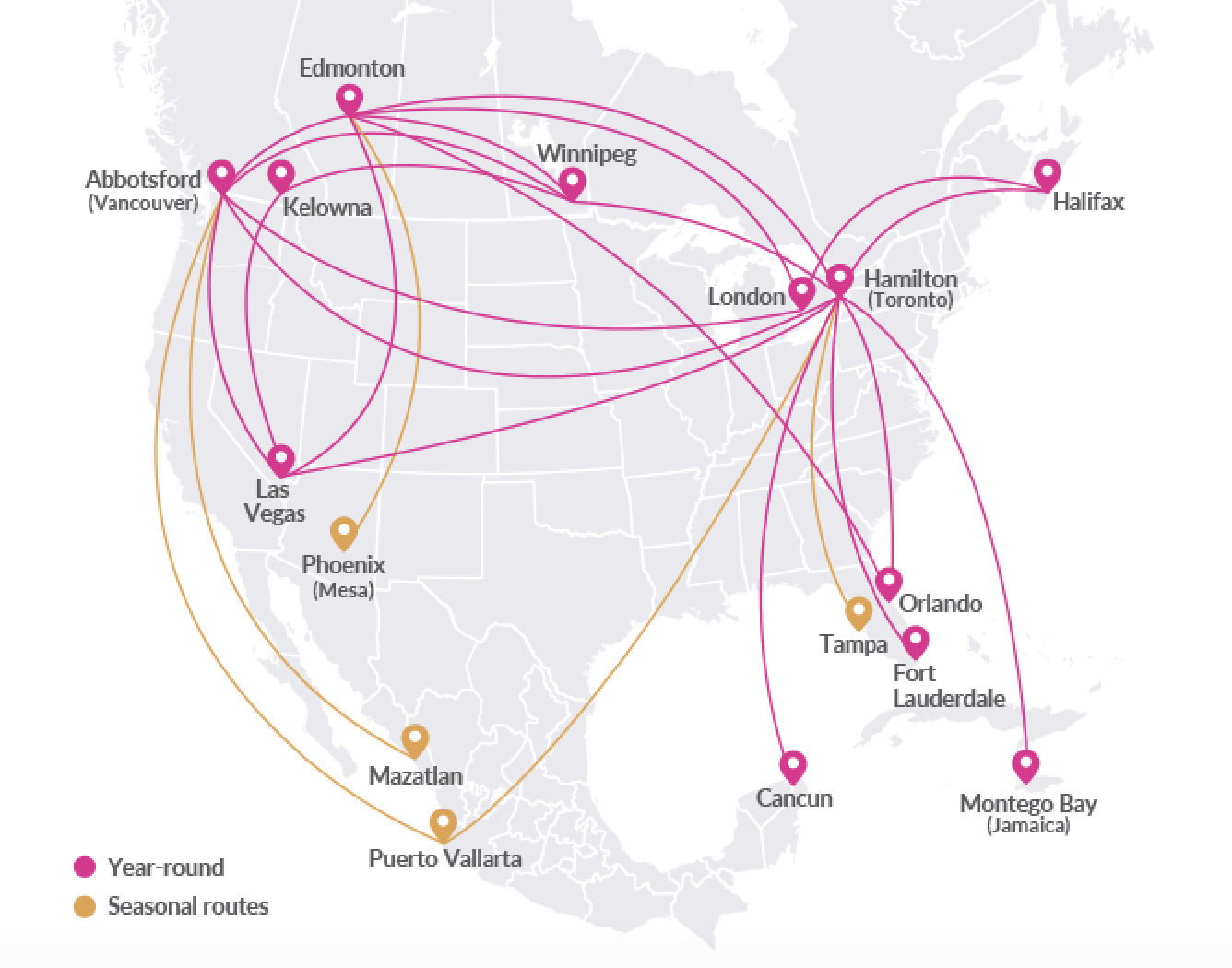 Similarly to Flair, Swoop operates from secondary airports, including Abbotsford and Toronto Hamilton, and during the recent CAPA Global LCC summit Swoop president Steven Greenway explained that one advantage of operating the LCC model in Canada is that the country is equipped with a number secondary airports that are “basically free for us to use”.

Swoop is also working to meet stated cost and ancillary revenue targets. It has consistently stated that it is aiming to produce unit costs excluding fuel of CAD6 cents and also has a goal of generating more than CAD40 of ancillary revenue per guest.

Although Swoop and WestJet both stress Swoop’s total independence from its parent company, the reality is that Swoop is part of a larger entity with resources to compete more effectively with existing new ULCC entrants and aspiring operators aiming to launch operations.

That competition includes Jetlines, which also recently touted a letter of intent for financing of CAD14 million from a Korean special purpose fund established by InHarv Partners.

There is a clear indication the start-ups are working to show that they are building the financial muscle necessary to compete with Swoop/WestJet and Canada’s largest airline, Air Canada. But ever since NewLeaf launched operations WestJet has been a fierce competitor, and now with the launch of Swoop, will continue to target its ULCC start-up rivals aggressively.

Fierce competition in the low priced end of the Canadian travel market is now a given and demand is clearly there for discounted fares, but that will not necessarily translate into profitable business for all of the new ultra low cost start-ups Canada.