Oneworld partners, British Airways and Finnair are each beset by significant challenges, not least labour unrest and a need to cut costs. Despite this, BA managed to restore some respectability to its bottom line in the Dec-2009 quarter. The carrier unveiled an operating profit of GBP25 million (EUR28.6 million) in the three months ended 31-Dec-2009 (against a loss of GBP51 million in the same period last year), while Finnair reported an operating loss of EUR39.4 million (a significant widening from a EUR13.7 million loss in the Dec-2008 quarter). BA’s greater ability to draw on its partnerships arrangements may give it the vital edge, as economic conditions remain testing. 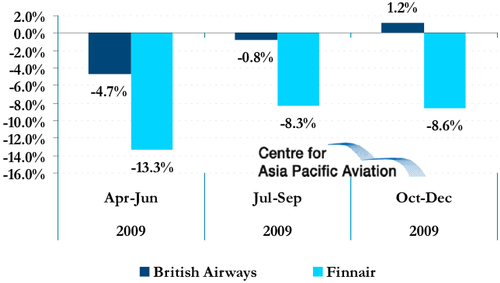 BA stated its profit turnaround (its first operating profit since its fiscal second quarter in 2008) was “largely as a result of the considerable progress we have made on reducing our costs” (-10.5%), as total revenue in the period was down 12.9% year-on-year.

Passenger revenue was down 13.0%, on a 3.9% reduction in capacity.  Yields were down 11.1% (or 15.8% excluding exchange), “largely as a result of lower year-on-year surcharges and sales mix within cabin class”. BA stated its premium traffic volumes have declined by 9.7% in the nine months to Dec-2009, which is “significantly better than industry figures as disclosed by IATA”. The carrier also noted that volumes are “stable and yields are starting to show improvement”.

BA stated its financial position is “strong” with GBP2 billion in liquidity at 31-Dec-2009, including GBP1,587 million of cash and GBP465 million of general facilities.

British Airways' chief executive Willie Walsh, said the results “highlight the impact of permanent changes across the company on our costs. Those changes, combined with capacity reductions and external spending cuts, mean operating costs are down by 10.5% and show that we've adapted quickly to the new business realities created by the global recession”.

Mr Walsh added, “while we are on the right track, we still expect to make record losses this year. Permanent structural change is being introduced in all areas and will return us to sustained profitability. We are working with our staff, their unions and the trustees about solutions to address our GBP3.7 billion pension funds' deficit and are discussing a range of changes to future pension benefits”.

Finnair is also seeking unprecedented changes in its structure, initiating efficiency measures aimed at cutting costs by some EUR200 million (although just over a quarter of the target is as yet unidentified).

Of the programme, a savings target of around EUR120 million is allocated to personnel costs. Finnair noted, “a significant proportion of planned efficiencies and cost savings will be achieved through collective employment and stabilisation agreements concluded with personnel, while some will be found via temporary lay-offs and redundancies”.

Last year's result was also adversely affected by industrial action, including turnover lost and extra costs resulting from the threat of such action. During long collective employment agreement negotiations, the Finnish Airline Pilots' Association (SLL) threatened a strike in Feb-2009 and implemented a two-day strike in Nov-2009.

President & CEO Mika Vehviläinen stated, “2009 was a historically difficult year for the entire airline business”, adding, “for Finnair, the situation was made particularly difficult by a sharp fall in domestic demand as well as price competition, due to overcapacity in the sector, on many of our main routes”. Finnair noted cost-cutting measures produced results during the year, but costs could not be cut as quickly as revenue declined.

A contrast in styles as they battle for Asia Pacific traffic

BA too is having to stare down its more militant unions, and is again imminently confronted by a flight attendants’ strike. But on a broader canvas, BA’s future strategy involves greater consolidation and alliances. Mr Walsh stated the airline is “on track” to finalise a merger agreement with Iberia by the end of the year. The merger is expected to generate annual synergies of approximately EUR400 million and is “likely to be completed in late 2010”, according to BA.

BA focuses on consolidation and alliances, while Finnair walks alone

For the Asia Pacific region, British Airways has enjoyed a close-knit long-term relationship with Qantas (although a proposed merger agreement between the two never got off the ground). The Australian Competition and Consumer Commission last week renewed the valuable Qantas-BA Joint Services Agreement (JSA) for a further five years, citing rising competition from mid-point carriers, “meaning the JSA is unlikely to result in any substantial lessening of competition in the relevant markets”. The renewal is technically still a draft, but should be un-controversial.

BA also recently announced a series of enhancements to its business relationships with Japan Airlines (JAL) that would, according to BA, result in approximately USD200 million in new revenue to JAL over three years. Among the most significant of the initiatives is British Airways' offer to create a joint business agreement with JAL which, from Apr-2011 and subject to regulatory approval, would include greater revenue sharing opportunities, a new service between London Heathrow and Tokyo's Haneda International Airport and greater codesharing. From Apr-2010, BA will more than double the European points on which it codeshares with JAL, although the two do not currently codeshare on Narita-Heathrow services.

Finnair, by comparison, is pursuing a more independent strategy, developing, in particular its Europe-Asia strategy, to leverage the geographic advantages of the Helsinki hub in linking European and Asian market.

Finnair was notable in its absence from the oneworld 'Special package of measures’ to JAL, but has instead been busily rightsizing its own capacity to the region.

Finnair now focuses over 9% of its total weekly capacity on the Asia Pacific region, but still has a massive exposure to the weak economic environment in Europe, with almost nine in ten seats within its home market. As a Finnair spokesman said in 2008, "as a small country, we could not compete with the big European airlines on North American routes. Concentrating on Asia makes geographical sense for us. The shortest route to Beijing or Shanghai from Europe is via Helsinki”.

By contrast, BA has a similar proportion of its capacity on Asia Pacific routes, but a much lower European exposure (around two-thirds of capacity), as it also serves North America (12.6% of total weekly seats), the Middle East and Africa.

Finnair has previously relied on cargo to supplement its revenues. In its latest quarterly report, Finnair noted that air cargo demand is “beginning to pick up modestly, particularly in the Asian market”. The carrier noted the implementation of the airline’s Europe-Asia strategy will be “purposefully continued, but taking into consideration market-specific fluctuations of demand”.

Delhi was served daily from mid-September to the end of January, after which it would revert to six times weekly. In June-September, Finnair flew to Tokyo daily instead of its normal four flights per week schedule. The carrier has also been using A330-300 aircraft in addition to B757 for long-haul leisure flights this winter.  The 271-seat A330 aircraft operates non-stop leisure flights from Helsinki to Phuket 3-4 days a week from November to April.

Meanwhile, BA handled 123,000 passengers on Asia Pacific routes in Dec-2009 (down 7.7% year-on-year); but Finnair is closing in, handling 96,300 (down 4.5%). Both carriers saw sharp reductions in Asia Pacific traffic last year, although there was a distinct improvement in Dec-2009. 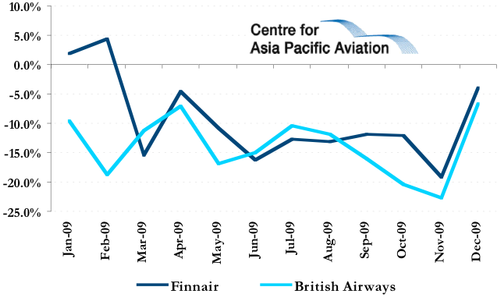 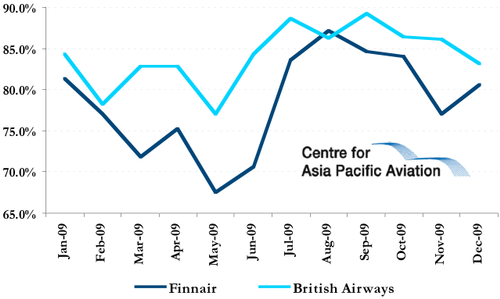 BA stated the year-on-year trading improvement seen in the Dec-2009 quarter is “expected to be similar in the fourth quarter (to 31-Mar-2010), excluding any impact of potential industrial action”, adding, “long-haul premium continues to show modest year on year improvement and other segments continue to be stable at current levels”.

BA stated the revenue trend has improved due to optimism about economic recovery in the premium sector, but non-premium revenue will “require a return to economic growth to deliver historic performance levels”. Finnair concurs, stating “a cautious recovery of business travel demand has been perceptible from the end of last year, particularly outside Finland”, but warned, “overcapacity in the sector is, however, continuing to keep ticket prices low, irrespective of the customer segment”.

British Airways concluded, “our focus on permanent cost reduction must continue if we are to return the business to profitability in the short term”.

Finnair’s Vehviläinen stated, “the early part of 2010 still appears to be difficult for Finnair and for the entire air transport sector”, adding, “domestic demand shows no signs of recovery and it seems that the fall in prices will continue in early 2010”. Finnair stated its overriding goal is to reduce unit costs to correspond with falling average yields.

Finnair's passenger traffic capacity is expected to be around 10% below the previous year in 1Q2010, leading to a “further fall in turnover in the first quarter”. Overall, Finnair is expecting the first quarter of 2010 to “remain difficult and to be clearly loss-making”. But group profitability is expected to improve gradually towards the end of the year, due to the efficiency measures being implemented.

The coming year will test the ability of both carriers to reduce costs. And, while they remain at the mercy of economic conditions, BA’s greater reliance on partnerships may well give it a long-term edge.