European markets were down for a second day on Friday (05-Feb-2010), dragging down airline shares, as investors continued to express concern over debt in Eurozone countries. Early in trading, investors were also concerned ahead of US unemployment data, released later in trading. However, the data showed an unexpected drop in unemployment, to 9.7% in Dec-2009. Oil prices slid 2.7% to USD71.19 per barrel in New York.

Also during trading, British Airways CFO, Keith Williams, stated changes to the carrier’s future pension arrangements were unavoidable, and the carrier is not ruling out any options to deal with its GBP3.7 billion pension debt. The carrier is looking to make the changes in order to reach a merger agreement with Iberia (-2.5%). 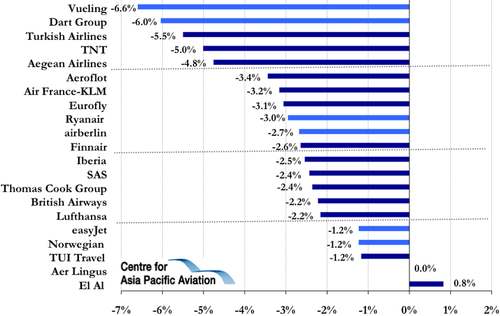