European airline stocks generally declined yesterday, affected by weak performance across the European markets. The London FTSE declined 0.59%, the Paris CAC Index was down 0.31%, while the Frankfurt DAX lost 0.24%.

The Australian Competition and Consumer Commission (ACCC) launched a public consultation into Qantas and British Airways’ application for re-authorisation of its Joint Services Agreement, and related and consequential coordination of schedules and pricing. The Joint Services Agreement, which has been in operation for 14 years, provides for a JV service primarily on services between Australia and Europe.

Meanwhile, the EU Emissions Trading Scheme (EU-ETS) is set to adversely affect start-up operations beyond 2010, with Amsterdam Airlines stating that its position as a start-up could mean it is unfairly affected by the scheme, due to the use of 2010 as a baseline year to determine the allocation of carbon credits. The carrier intends to double its fleet between 2010 and 2011, but the allocation it receives in the trading scheme will based on the amount of aircraft flying in 2010. Amsterdam Airlines is in talks with various parties to see how the EU-ETS can be made fairer for expanding carriers.

Meanwhile, shares in Aer Lingus led the way up (+5.7%) as rumours circulate that the airline may relocate to the UK or northern Ireland to avoid further labour problems as it downsizes; Turkish Airlines and SAS dipped (-0.4%), Austrian closed lower (-2.2%) and Eurofly lost (-4.4%). Thomas Cook (-3.4%) and TUI Travel (-2.3%) again fell in face of a pessimistic outlook for 2010. 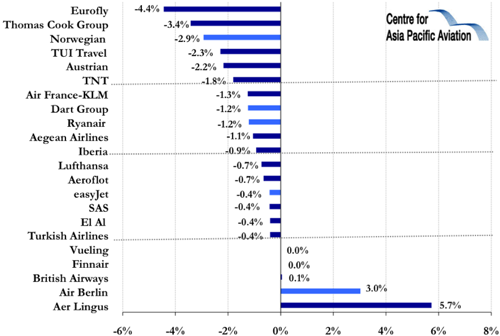