European airline shares were mostly down on Wednesday (29-Sep-2010) after European markets fell to a three-week closing low. Markets were pushed lower by a decline in Irish and Spanish bonds.

British Airways (+1.0%) and Iberia (+0.1%) made slight gains, after announcing they have signed an agreement to start a trans-Atlantic joint business with American Airlines, which is worth a combined USD7 billion in annual revenues. The revenue share agreement allows the three airlines to cooperate commercially on flights between the US, Switzerland and Norway and the US, Mexico and Canada. The benefits from the joint business will be shared between the airlines irrespective of which carrier takes the booking. The joint business will launch in Oct-2010. British Airways stated the agreement will enable the oneworld alliance to compete on an equal footing with the other main global alliances that have had regulatory approval to operate trans-Atlantic joint businesses for several years.

In other British Airways news, CEO Willie Walsh stated the revelation earlier this month that BA and Iberia have identified 12 merger candidates they might pursue once their own combination is completed has provoked huge interest from industry leaders.

Aeroflot (+0.4%) also made a marginal gain. During trading, the carrier announced plans to launch an LCC and charter subsidiary as part of plans to quadruple traffic figures by 2025. The airline indicated it plans to create a LCC subsidiary through merging six smaller airlines that have been absorbed by the national carrier, with Orenburg Airlines likely to assume the role as a charter subsidiary. Aeroflot plans to move into all passenger and cargo markets to increase its revenues USD18 billion by 2025 and passenger traffic to 79.5 million. The airline generated USD4.5 billion in revenue in 2009 and carrier 19.9 million passengers in 2009.

Elsewhere, Aer Lingus (+4.4%) gained, as did Turkish Airlines (+2.7%), following news the day before that it is considering acquiring Serbian Airlines. Thomas Cook (-4.4%) was down after stating that UK business over summer 2010 was weaker than expected. 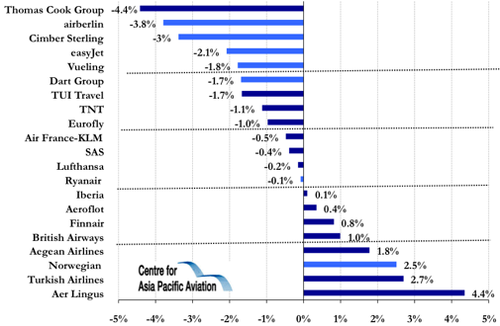