Unable to reach agreement with the pilot union, BALPA, it has now closed most of its short haul operations at Gatwick (or, more accurately, not restarted flights closed in the coronavirus pandemic). European flights from what was its number two airport had been "losing money for years". It will retain minimal domestic feed into its long haul operation, but otherwise consolidate at its main Heathrow hub.

The news is a blow to Gatwick Airport, whose capacity recovery is well behind the UK's overall, particularly versus other leading London airports (even more so compared with Stansted and Luton, the other main leisure airports).

Gatwick has already lost significant long haul connectivity, where BA has cut and Norwegian and Virgin Atlantic have withdrawn. EasyJet and TUI Airways have increased their seat share at Gatwick (but in a smaller market).

BA has returned capacity more rapidly at Heathrow and City…

The airline's Gatwick capacity is at just 5% of 2019's and this is holding back its overall London presence. This compares with 53% for BA's Heathrow capacity and 54% for its London City seat numbers.

Gatwick is now BA's sixth largest airport by seats, compared with second two years ago. London City is now its number two airport, up from third.

…but less rapidly in London overall versus the UK regions 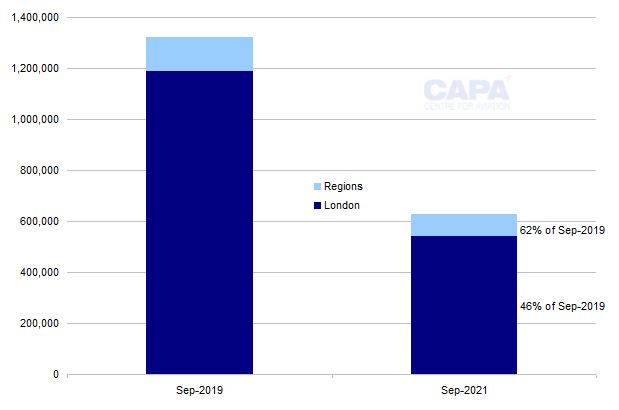 This is because its stronger recovery at Heathrow and City is more than offset by its minimal presence at Gatwick. As a result, London airports now make up a smaller share of BA's total UK capacity.

Two years ago, its three London airports accounted for 90% of BA's seats, whereas this has now fallen to 87%. 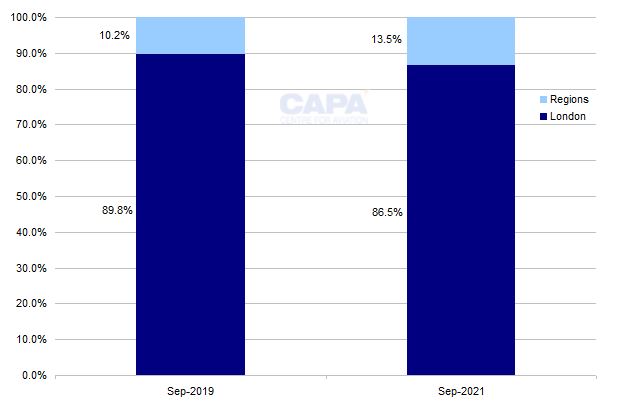 Gatwick's capacity recovery is well behind the UK's overall…

Heathrow, the largest airport in London and the UK, is in line with this 49% level.

The other larger London airports are all at higher levels: Stansted at 68% and Luton at 60%. Like Gatwick, Stansted and Luton have historically had more of a leisure focus than Heathrow.

Gatwick's underperformance against these two will be a source of concern to the airport.

Only the two small London airports are at lower percentages of 2019 capacity than Gatwick. City Airport is at 34% and Southend at just 15%.

EasyJet and TUI have gained seat share at Gatwick…

The leading airlines at Gatwick have reached very different percentages of their 2019 seat capacity.

Gatwick's biggest airline by capacity remains the LCC easyJet, which is now at 47% of its 2019 seat numbers at the airport. This is only a little below the average of 49% for all London airports. 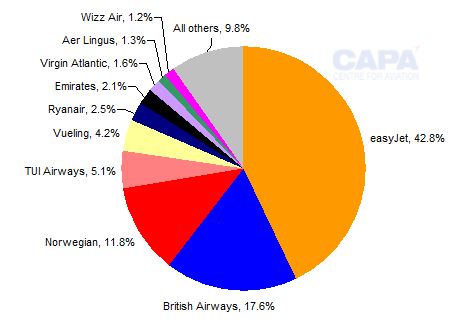 The two biggest losers of capacity and seat share at Gatwick are British Airways and Norwegian. 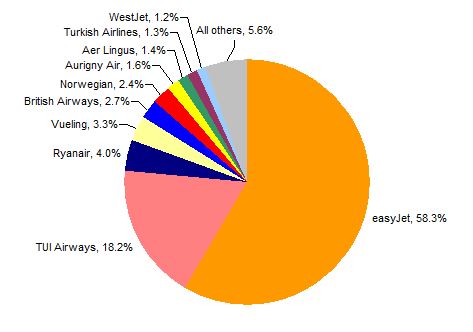 The very low levels of capacity returned to Gatwick by BA and Norwegian are the main factors in the airport's capacity underperformance versus London's other big airports.

BA's Gatwick network has dropped from 57 routes to six

According to OAG/CAPA data for the week commencing 27-Sep-2021, BA's total Gatwick network comprises only six routes, versus 57 in the equivalent week of 2019.

BA currently operates only five international routes from Gatwick. This compares with 55 two years ago, of which 12 were long haul and 43 were short/medium haul.

BA's current five international routes are all long haul: to the Caribbean destinations of Antigua, Kingston, Saint Lucia and Montego Bay and the Indian Ocean destination of Mauritius.

BA also now operates just one domestic route from Gatwick, to Glasgow, compared with two in Sep-2019 (Glasgow and Edinburgh).

Norwegian's Gatwick network has dropped from 36 routes to six

Two years ago Norwegian operated 36 routes from Gatwick. Of these, 13 were long haul, comprising 11 to North America and two to Latin America. It now operates no long haul routes.

Norwegian flew 23 short/medium haul routes from Gatwick in Sep-2019 but now operates only six: to the Nordic capitals Stockholm, Copenhagen, Oslo and Helsinki and to the Norwegian cities Stavanger and Bergen.

A third UK long haul operator has also taken connectivity away from Gatwick.

It now operates none.

Norwegian, BA and Virgin had two thirds of Gatwick's long haul seats in the summer of 2019, which was the last summer before COVID-19.

The reduction in Gatwick's international short/medium haul routes (destinations in Europe, Middle East and North Africa) has been more in line with total UK numbers.

BA's planned restoration of Gatwick long haul may be in doubt

According to data from CAPA/OAG, BA is currently scheduled to grow its long haul capacity from Gatwick broadly back to pre-pandemic levels in the coming winter schedule.

The airline plans to have nine Caribbean/Central American routes and three to North America, in addition to Mauritius and Islamabad. This will be of comfort to Gatwick Airport.

Nevertheless, BA's decision not to grow back significant short haul operations beyond very limited domestic feed (Manchester is planned in addition to Glasgow) will cast some doubt on the viability of these services.

New airline entry on the North Atlantic could offer prospects

However, with the arrival of new, longer haul narrowbodies and a flurry of new airline entry, there is potential for the North Atlantic market to attract a new profile of point to point travel.
See eg 36 start-up airlines line up for take-off. Part 1: Europe

But it is not only new entrants who may be attracted to a capital city airport that has slots and potential onward connections to Europe and beyond. The US majors, flush with funds from their new debt and government bailouts, are investing heavily in the new breed of medium haul narrowbodies and, as business travel inevitably loses some of its steam, the role of low cost operations will undoubtedly receive a boost. After all, British Airways saw this trend coming, but failed to convince its unions that the world had changed.

If BA saw Gatwick of interest for this reason, there is reason to expect others, including well established airlines, might think similarly.