British Airways (-1.9%) declined with the majority of European airline shares on Friday (03-Dec-2010) after reporting a 1.2ppt year-on-year decline in load factor for Nov-2010 to 74.7%. The decline was led by a 5.3ppt reduction in Asia Pacific load factor to 80.9%. However, the region remained BA’s highest load factor among its regions. UK/Europe routes reported a 3.3ppt rise in load factor to 68.5%.

Turkish Airlines’ (-3.6%) shares slumped on news Turkey's Privatisation Administration is seeking consultancy services to determine the privatisation strategy for Turkish Airlines. The government holds a 49.12% stake and officials have they are considering an additional public offering.

Aeroflot to benefit from World Cup

Aeroflot (+2.1%) was the biggest gainer of the day, ahead of reporting its 3Q2010 earnings this week. The carrier reached its highest level since Jun-2008 as a result.The airline was also up on news Russia won the rights to win the 2018 World Cup. Russia stated it will make “major upgrades and capacity increases” to its airports serving the 13 host cities. 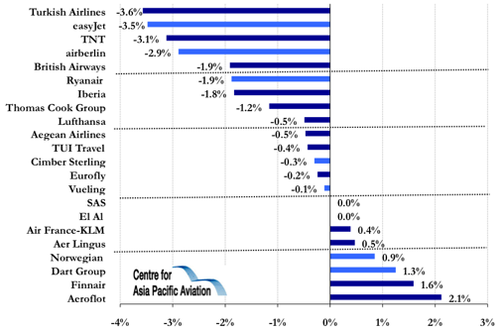