British Airways biggest loss sends shares up as a glimmer of hope appears; “Permanent changes” ahead

British Airways’ dreadful first half result provided a bit of everything: gruesome losses again (UKP292 million before tax), the death of short haul premium, promise of a GBP1 billion reduction in annual revenue, talk of a Christmas strike – and all this bad news was more than offset by news of good cost reductions, hints of a slowdown in the decline in premium revenues, another reassurance of the Iberia merger going through, the potential for cost savings from more staff cutbacks and the delay of the first A380 delivery.

But it was those hints of some upside from CEO Willie Walsh, whose downbeat outlook until now has been overpowering, that tickled the market’s fancy. Among investors apparently desperate for some light at the end of the tunnel, a quaint statement by Mr Walsh that “"Premium leisure demand has been strong during the last six months and we're investing in new leisure destinations with six new routes starting this winter”, seems to have been enough to get the bulls running.

But “premium leisure demand”? That sounds beguilingly like premium travellers trading down to premium economy. Or was it supposed to mean discretionary spending was trending upwards? – certainly not something borne out by UK retail figures. The low UK pound will be helping with yields in some markets, where performance is stronger, but this is an intriguing new description.

But the market liked it

Despite the ugly bottom line, albeit with a still strong balance sheet with some GBP4 billion, both BA’s and Iberia’s shares moved significantly higher on Friday, illustrating that, probably more than anything, investors are looking to closure on the Iberia merger.

From its gloomy depths, British Airways’ shares have performed relatively well in the past two weeks, halting what looked like a dangerous decline as the wider market moved upwards 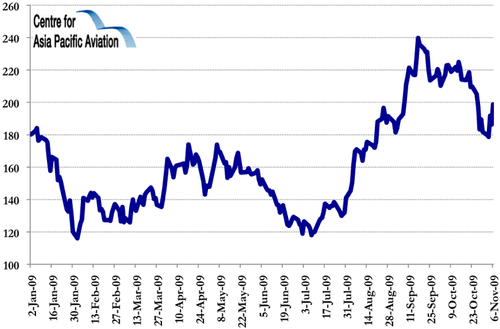 “Permanent changes to the way we run our business”; and “further structural change in the second half”

Mr Walsh has signalled major change, although without explicit descriptions of the wider plan. The statement was in the context of BA's premium sales and achieving a global stature as a premium carrier (see below). But it also clearly involves other apparently disconnected elements mentioned in the airline’s release – for example comments about permanent changes in Europe’s premium (or lack of it) short haul market.

Whether this implies using another, lower cost, vehicle for UK-Europe operations, such as a subsidiary LCC, or some new way of working with Iberia, if and when that merger is achieved, is not clear, but is inevitably one option on the table. But meanwhile, the mainline carrier is heavily focused on premium market and on the (long haul) routes where that segment will recover substantially (a 22% reduction in Asia Pacific passenger numbers in Oct-2009 could be one indicator of priorities).

As Mr Walsh says, “The global airline industry is facing continued pressure on yields highlighting a significant shift within the industry. We will introduce further structural change in the second half to secure the long term future for our business.”

The changes also inevitably mean substantial cutbacks in staff numbers.  The carrier will be making “making further manpower reductions of 3000 by March 2010”, on top of the 1,900 already announced; many of these are to be overseas employees, with voluntary early retirement also forming part.

And Mr Walsh has now talked of a further reduction in winter capacity, to be down by 6% year on year, rather than the 5% previously suggested. BA is still targeting improved yields and, although it means losing market share, especially within Europe, that is the price which must be paid.

But this should at least help improve load factors. And, if the Iberia merger goes through, there is room for substantial rationalisation.

BA recently took its first tentative step down the slippery slope that US full service airlines have been skiing – generating ancillary revenues by charging for services previously included in the full service product - in this case for advance seat allocation.

Sandwiched in between statements about strengthening the carrier’s “position as the leading global premium airline” and upgraded Club World product was the incongruous statement that “we're offering customers the option to pay to reserve seats more than 24 hours in advance and have seen an excellent response to this new initiative.”  The positive spin was partly justified on the basis that, thanks to an IT upgrade, the carrier was now actually able to provide advance seat allocation, something that most LCCs have been able to do for sometime.

But Mr Walsh’s description of the "excellent response" would be in financial terms only, because the move certainly did not meet with customer or media approval. But if BA can get away with it (and it seems to have done so), this does offer a substantial additional revenue source. And one which it will tentatively extend progressively to other areas, such as baggage charges, as the US airlines have done. It’s a course still fraught with danger, because most of BA’s non-US competitors in long haul premium markets are so far staying away from this blurring of the lines between low cost and full service airlines.

Nonetheless, the CEO stressed that BA is, rather optimistically, “continuing to innovate with new services for customers to strengthen our position as the leading global premium airline. We launched our London City to JFK all-business flights and they're proving popular with customers with booking levels ahead of expectations…. (and) upgrading our cabins continues and, with our Club World refurbishment nearly complete, we will introduce a new First cabin in the New Year.”

Said Mr Walsh, “Our cargo business continues to be impacted by the worldwide decline in demand for airfreight although its performance compares favourably with market trends which saw volume declines of some 13 per cent during the period.” This rather opaque description covered a decline in cargo revenue of 30.0%, with yields down 24.8% (part of which is attributable to lower fuel surcharges). To the extent that air freight is a lead indicator of economic performance, not a lot to give comfort there.

October traffic figures give a little comfort, although load factors up

For the October month following the period covering the six months to 30-Sep-2009, traffic figures take a somewhat ambiguous shape. Passenger capacity for the month (ASKs) was down 6.4%, while traffic (RPKs) was down 1.9%, stimulating a load factor improvement of 3.7 ppts. But heavily understated was a year-on-year 1.4% decrease in premium traffic; although this looks more favourable than recent months, it comes on top of a monstrously steep decline last year after the collapse of Lehman Brothers. Meanwhile, non-premium traffic was down a further 2.0%, with undoubtedly still negative yields.

More exciting times ahead; need to get a clear direction

With the threat of a strike looming over the carrier in mid December, when cabin attendants are due to complete a strike vote, and with Mr Walsh still adamant that British Airways must kill far more in its cost base (in the face of a UKP1 billion annual revenue downturn), the next few weeks will not be dull.

Apart from cost reductions, BA has several key issues to resolve before a clear picture emerges of its future. The EU/US grant of anti-trust immunity for its combination with American Airlines and the merger with Iberia, BA's strategy in regional Europe and achievement of a globally recognised premium product will be central.

In the short term though, the CEO’s major hurdle to climb is getting the flying crew aligned with what is still a less than clear image of where he wants to be.