Don't fear, American Airlines, the cavalry is coming. A report in The Street is suggesting British Airways and Qantas (or more precisely, their bevy of bankers) are considering investing in Japan Airlines, to help American Airlines and oneworld defend its alliance with the beleaguered Japanese airline, citing unnamed sources close to the deal.

British Airways is reportedly "deeply preoccupied" with reports JAL could be considering switching to the SkyTeam Alliance if Delta lobs JAL an offer it cannot refuse. Delta's partner, Air France-KLM, is also reportedly interested in putting the icing on what could be the biggest wedding cake in modern civil aviation.

Meanwhile, BA CEO, Willie Walsh, confirmed the carrier is interested in acquiring bmi and has held talks with Lufthansa. The German carrier has not yet decided what it wants to do with bmi, but has confirmed it is considering a number of different options.

All this talk of deal making is not helping BA's efforts to convince staff of the need to cut costs. The union representing British Airways’ 14,000 cabin crew, BASSA, has also cited improving economic conditions as a reason staff can “hold firm” and resist the carrier’s attempts to secure a two-year wages freeze. BA plans to reduce its workforce by 2,000 employees.

Finnair and the Finnish Flight Attendants' Association SLSY meanwhile reached a fixed-term stabilisation agreement yesterday, which introduces a collective employment agreement and cost cuts for the 15 month period, ending 31-Dec-2010. Investors welcomed the 5% cut to basic salaries and termination of collective incentive bonuses for 2009, as well as a wage freeze up to the expiry of the agreement. However, the agreement contains a pay-back model, which will be determined based the carrier’s financial performance in 2010 and 2011. 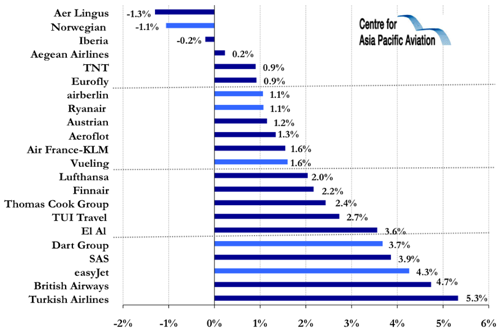