When Willie Walsh became British Airways CEO some 15 years ago, his mandate was to drag the flag carrier into the 21st century. He did succeed in redirecting the ailing airline towards an ability to compete in the new world where LCCs occupied an ever increasing market share in Europe.

The cost-heavy airline had been staring down the barrel of inevitable decline if the changes were not made. His work was constantly dogged by the behaviour of unions and, often, politicians who continue to treat the company as if it were still a government department.

Luis Gallego took over from Mr Walsh as CEO of IAG only in Sep-2020. One of his first moves has been to replace Alex Cruz as CEO of British Airways with Aer Lingus boss Sean Doyle.

Mr Cruz, promoted by Mr Walsh from running IAG's LCC Vueling to leading BA in 2016, presided over the UK national flag carrier's most profitable years in history. But it was not all plain cruising. His cost focus and a number of unforced errors under his watch (IT glitches, customer data breaches, a pilot strike and cabin crew dissatisfaction although several of these were due to longstanding inherited issues), arguably weakened the BA brand and industrial relations.

Financial performance at BA has now plummeted to its worst ever, due to the COVID-19 crisis. This is true of every airline, but BA is heavily exposed to two key markets particularly hard hit by the crisis: the premium segment and the North Atlantic. Rebuilding will need a sensitive approach that restores employee and customer confidence.

The new face at the top of BA, Mr Doyle actually served 20 years at the airline before his two years leading Aer Lingus. It is to be hoped that he enjoys a challenge. Further extensive surgery at BA is not just desirable, it is inevitable.

Mr Cruz was the founding CEO of the Spanish low cost airline Clickair, which merged with Vueling in 2009. He then led the enlarged Vueling, which was acquired by IAG in 2013.

IAG CEO Luis Gallego worked under Mr Cruz at Vueling until 2012, when he became head of Iberia Express before taking the job as Iberia CEO in 2013 (he was also Chairman of Iberia from 2014).

When Mr Cruz became Chairman and CEO of BA in 2016, the two Spaniards were responsible for IAG's two largest airlines, although Mr Cruz appeared to be the more senior as he led the bigger airline of the two.

However, Mr Gallego was preferred as successor to Willie Walsh as CEO of IAG, taking over in Sep-2020 (delayed from Mar-2020 due to the pandemic). Mr Cruz now found that his former subordinate from his Vueling days was his boss.

Alex Cruz's remit was to drag BA into a new, more fiercely competitive world and in that he largely succeeded. The four years during which Mr Cruz was Chairman and CEO of British Airways coincided with the most profitable period in the airline's history, until this year.

Before his time, BA had previously achieved a double digit operating margin only once, when it made 10.0% in the financial year ended Mar-2008. That was just before the global financial crisis, and its margins then immediately crashed into negative territory in each of the following two years.

BA is IAG's biggest contributor to return on invested capital

Throughout this time BA also achieved a return on invested capital (ROIC) around, or above, IAG's group target of 15.0%, comfortably above its estimated weighted average cost of capital of 10.0%.

IAG: rolling 4Q return on invested capital for subsidiary airlines and the group

But BA's brand and industrial relations have been eroded

BA achieved financial success under Mr Cruz, but his tenure as CEO was marred by challenges and glitches, even before the COVID-19 pandemic. Tasked with focusing on cost efficiency, he trod a fine line between low costs and brand erosion.

There was criticism of reductions in onboard catering services, particularly from frequent business flyers (core contributors to BA's revenue).

In 2017 there was a series of IT failures that grounded flights and stranded passengers.

A cyber attack on BA's IT in 2018 led to customer data being compromised, for which the airline received a GBP183 million fine (a record for a data protection breach). Ironically, just a few days after Mr Cruz's departure, the Information Commissioner's Office massively reduced the fine, to GBP20 million, in recognition of the financial damage BA is suffering.

In Sep-2019 BA pilots undertook unprecedented strike action over pay and conditions. IAG estimated the financial impact of the strike at EUR137 million.

These challenges all contributed to a perception that BA's brand was not what it used to be. They also eroded employee confidence in management.

And when the bad news is as widely spread, the positives can easily be disregarded. It was on Mr Cruz's watch for example that he introduced a much needed GBP6.5 billion investment mainly around a business class upgrade for BA's ageing product.

Premium and the North Atlantic: key BA markets hammered by the crisis

Nevertheless, as detailed above, BA held on to double digit operating margins for five years up to and including 2019, an unprecedented achievement. However, as with all airlines, it has fallen back down very heavily this year and reported an operating margin of -33.9% in 1H2020.

All airlines are gripped by the crisis, but BA has particular exposure to two markets that are struggling more than other segments in the faltering recovery: premium traffic and the North Atlantic.

BA is heavily exposed to the premium segment

BA is more exposed to premium passenger segments (business class and first class) than most airlines in the European market.

According to CAPA analysis of data from OAG Schedules Analyser, premium cabins accounted for 15.2% of BA's seats in 2019 (14.5% in business class and 0.7% in first class).

This compares with a share of 5.3% for all airlines serving Europe (of which 5.2% was business class and just 0.1% first class).

With premium fares sold at a multiple of economy fares, premium cabins account for a much larger share of BA's revenues than their 15% share of seats – perhaps up to half of the airline's 2019 revenue.

British Airways and all European market: premium seats as a percentage of total seats, 2015 to 2019 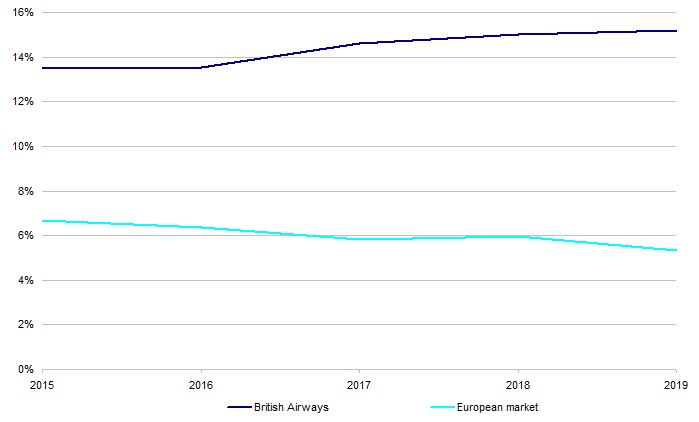 During the COVID-19 crisis BA's premium capacity has been harder hit than total premium seat numbers in the European market.

In May-2020, the worst month for premium capacity according to OAG data, BA's premium cabins had 97.2% fewer seats than in the same month of 2019, while total premium seat numbers in Europe were down by 92.7% year-on-year. 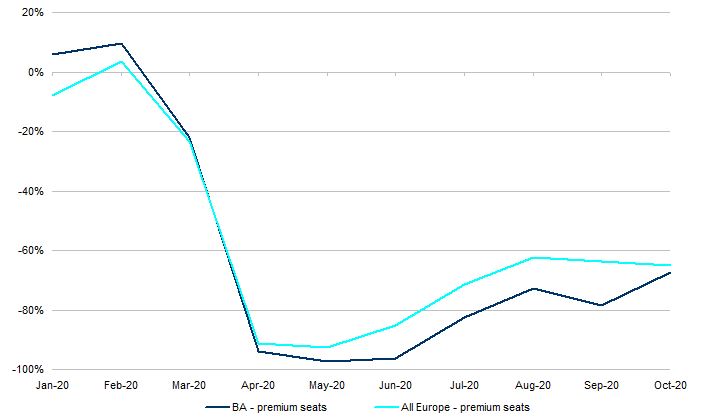 The North Atlantic is BA's biggest revenue source, but has collapsed

If premium cabins are a crucial product segment for BA, the North Atlantic is a very important geographical segment – its biggest revenue source.

In 2019, routes between the UK and North America accounted for 16% of BA's seats, according to data from OAG and CAPA.

Their share of its ASKs was much higher – 37% – and this is probably a better reflection of the North Atlantic's contribution to BA's revenue than looking at seats (but still an underestimate).

BA's 2019 annual report reveals that the USA generated 20% of the airline's revenue by point of sale. It is realistic to assume that this reflected passengers based in the US buying trips to the UK and back, and that UK-based passengers flying to the US generated at least the same again.

The North Atlantic market overall can reasonably be assumed to be responsible for significantly more than 40% of BA's 2019 revenue.

The chart below illustrates and summarises both of these two vital challenges for BA: the underperformance of its premium cabins and of its North American operations in the recovery, when compared with its overall capacity since Jul-2020.

In addition, BA's recovery has been slower than that of the total European market (BA's year-on-year seat reduction of 74.5% in Sep-2020 compares with a 57.7% drop for Europe overall, according to data from OAG Schedules Analyser).

The OAG data indicate that BA will track a little above the European market in total seats versus 2019 for Oct-2020, but this is subject to further change until the month is over.

Note also that passenger numbers are likely to be down more heavily than seat count in all segments (BA's load factor was just 27.6% in 2Q2020, the last period for which its traffic data are available). 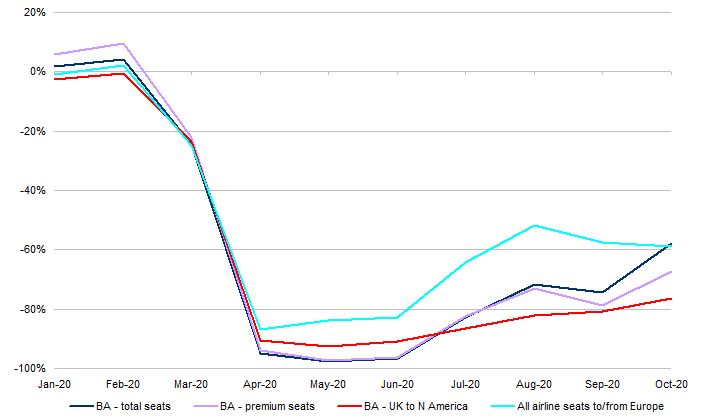 Sean Doyle: a new face at the top of BA, but with 20 years at the airline

Mr Cruz can in no way be held responsible for the COVID-19 crisis. Indeed, he has worked tirelessly to focus minds at BA on the fight for survival.

However, the often difficult industrial relations environment that surrounded the airline before the crisis, and employees' questioning of what a sharper cost focus meant for the BA brand, has added to the airline's current challenges.

Mr Cruz was heavily criticised by unions and UK politicians, and blasted by the media for plans to fire and rehire cabin crew on lower pay in an attempt to secure a lower cost base in the crisis. Industrial action was threatened.

This approach was abandoned after Mr Walsh stepped down and Mr Gallego took over the top job at IAG, and he must have felt that a new face was needed to try to rebuild better employee relations. Nevertheless, Mr Cruz' continued position as Chairman of BA for a transition period is a sensible way to manage the handover and benefit from his knowledge and experience.

But the fact remains that politicians, unions and the media continue to regard the long-privatised airline as public property, somehow immune from the realities of an airline world that was already dramatically changed long before the coronavirus struck.

The new BA CEO, Sean Doyle, is a 20-year veteran of the airline returning to London after almost two years as head of Aer Lingus in his native Ireland, often described as "low key" or "softly spoken". He follows ex-IAG CEO Willie Walsh in leading both the Irish and the British national airlines.

However, unlike Mr Walsh and Mr Cruz when they took over at BA, Mr Doyle is not a newcomer to British Airways. He may be more in tune with the airline's culture as a result. Hopefully he will be granted a honeymoon, because the marriage will not be easy.

Mr Doyle faces huge challenges, if anything growing by the day, as expectations of a rapid recovery recede.

It is hard to see Mr Doyle being able to undertake any markedly different directions if BA is to survive the current disastrous conditions. Its model is fundamentally threatened; business travel, the core of its previous success, will recover much more slowly than leisure travel.

Without very substantial government support - as its main European full service competitors have received - further, extensive cost surgery is inevitable. A resurgence of coronavirus cases in Europe as winter approaches would appear to promise that an aviation recovery is anything but imminent.