Slot allocation at airports worldwide is often a complex process, but the divvying up of Avianca Brazil’s slots in the wake of the airline’s demise has been particularly labyrinthine. An auction of the carrier’s assets was initially called off and then held, with LATAM Airlines Group and GOL emerging as the winners.

But now it seems Brazil’s government has deemed that auction invalid. That could possibly benefit Brazil’s third largest airline, Azul, which refused to participate in the auction process. Azul has also tapped social media to make its case for slots at São Paulo Congonhas, a strategic airport for all airlines in Brazil.

Avianca Brazil sought creditor protection near the end of 2018 and subsequently its fleet dwindled as some of the airline’s aircraft were repossessed and others were returned to lessors. In May-2019 Brazilian regulator suspended the airline’s operations.

The carrier was the fourth largest domestic airline in Brazil behind its competitors GOL, LATAM Airlines Brazil and Azul, and its market share before it sought creditor protection was between 13% and 15%.

The wind-down of Avianca Brazil’s assets – mainly coveted airport slots – has been anything but predictable.

Azul’s service from Congonhas includes Porto Alegre, Curitiba, and Belo Horizonte. Its share of departing frequencies is just a fraction of those of LATAM Airlines Brazil and GOL. As of late Jul-2019, Azul had a total of 87 frequencies from Congonhas. 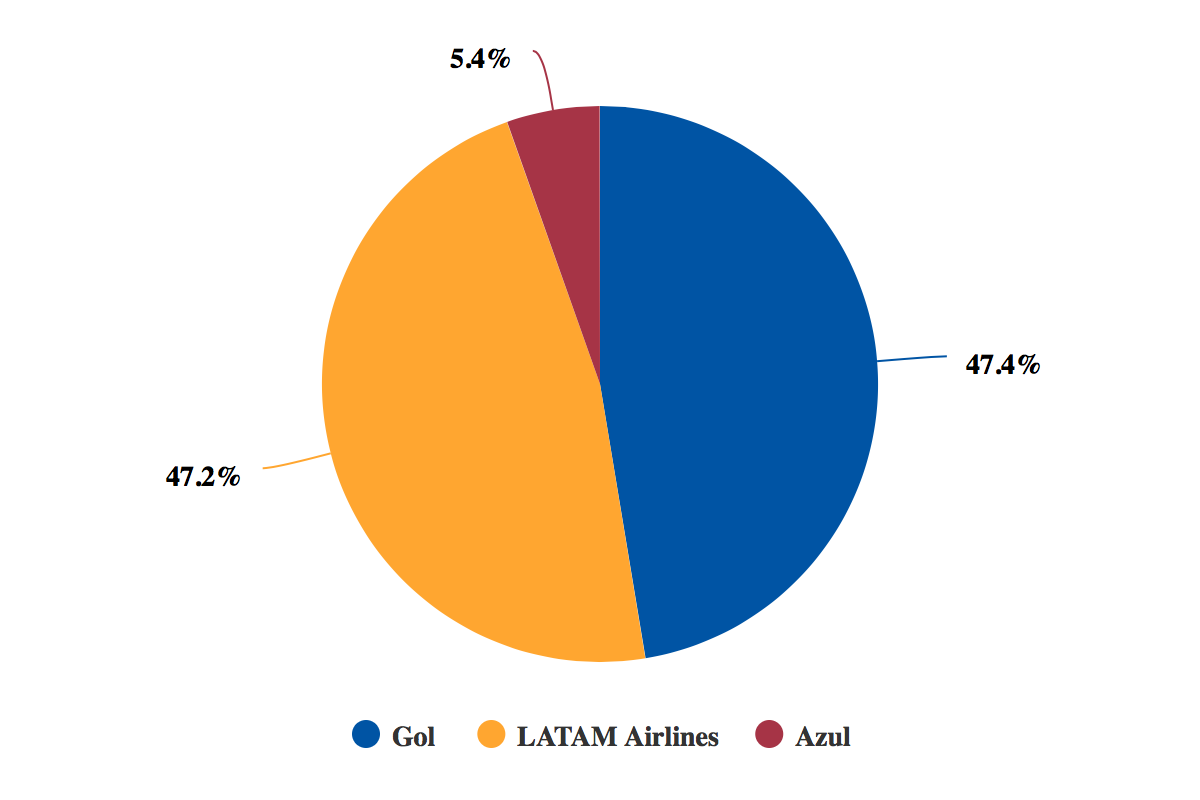 After Azul declared its intentions, Avianca Brazil’s largest creditor, the hedge fund Elliot Management, struck a deal with LATAM and GOL for each company to offer USD70 million for Avianca Brazil’s assets at an auction originally scheduled for early May-2019. Avianca Brazil was divided up into seven segments to be auctioned off.

After a legal challenge from Swissport Brazil, a court temporarily suspended the auction. Swissport claimed that the transfer of slots was prohibited.

Azul then submitted a new bid for of USD145 million for slots pairs, including the slot pairs for shuttle service from Congonhas to Rio Santos Dumont.

Before submitting its latest bid for Avianca Brazil’s slots, Azul’s management declared that “Congonhas would have been an incredible cherry on top of the cake for us to show our product to the market”.

In Jul-2019 an auction of Avianca Brazil’s seven units occurred, but Azul refused to participate, “because it did not believe in the legitimacy of the procedure”, according to The Rio Times.

After the auction, Azul launched a campaign highlighting the duopoly on the air bridge between Santos Dumont and Congonhas, noting that 95% of slots at Congonhas are held by LATAM and GOL.

How that process will work is somewhat up in the air. ANAC has held consultations with aviation stakeholders regarding the allocation, but the outcome is far from predictable. But ANAC’s assumption of responsibility for the slot allocation should provide Azul some hope that it can gain additional slots at Congonhas.

As ANAC works to allot Avianca Brazil’s slots at Congonhas and other airports, domestic capacity growth in the country’s domestic market for the 5 months ending May-2019 was just 0.3%, with traffic growth of 2.1%.

GOL remained the market leader, with a 34.4% share of domestic passengers – an increase of 3.9% year-on-year. LATAM Airlines Brazil’s market share increased 1.5%, to 31%.

The latest statistics from Brazil’s government show that from Jan-2019 to May-2019 GOL, LATAM Airlines Brazil and Azul had a combined domestic passenger share of 91%.

Avianca Brazil was still operating limited services during part of that period, and now that the airline has completely ceased operations, Brazil’s domestic passenger share will become even more concentrated among the country’s three largest airlines.

Azul is attempting to inject competition into one of Brazil’s busiest and lucrative domestic routes, but for now its ambitions remain in the hands of the country’s regulators.