The capital available from ICBC Leasing totals up to USD8 billion, for domestic and international transactions. The MoU also covers financing for Bombardier Aerospace, as well as its current and potential future subsidiaries and affiliates, in the areas of maintenance, service and production, and allows ICBC Leasing to provide Bombardier with credit facilities, hedging and settlement services for general requirements through affiliates of ICBC.

Major movers in aerospace shares included Be Aerospace, which gained 3.7%, and Goodrich, up 3.4%. Goodrich announced yesterday that it has completed certification of the B787 breaking system.

DAE Capital the leasing unit of has Dubai Aerospace Enterprise has announced another round of aircraft order cancellations, this time for 18 A320s and 12 A350-900s. The company has already cut 47 Airbus and Boeing aircraft from the orders it made for more than 200 aircraft in 2007. The leasing unit also reportedly cancelled orders for 32 B737s last month.

Afriqiyah Airways also cancelled three A320 aircraft but has reportedly converted these into new orders for A321s. Airbus stated it has sold 40 aircraft and received 43 cancellations in Jan-2011 and Feb-2011, for three net cancellations. It delivered 73 aircraft over the same period. 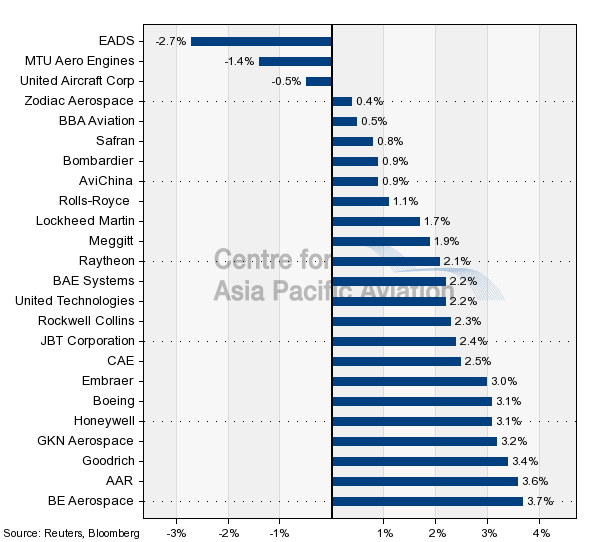