As airlines are focusing on strengthening their balance sheet, so too is Boeing, according to Executive Vice President and CFO James Bell, who spoke and the Bank of America/Merrill Lynch 2009 Global Industries Conference yesterday. Bell outlined how the company has adjusted production rates on the commercial side and is expanding products and services on the military side to cope with US military budget constraints as the Obama Administration focuses on coping with the twin rescues of the financial and auto industries.

Amongst the signs of market improvements, said Bell, is the loosening of financial markets which has enabled airline customers to finance aircraft deliveries on their own. The company recently down graded its capital needs for financing new aircraft for its customers from USD1 billion at the beginning of the year. “We are seeing improvements in the capital markets,” said Bell, adding old instruments used to finance aircraft are re-emerging. “Because of that we made a downward revision to our requirements to USD800 million. The vast majority of our aircraft are being financed by other sources,” he said, “and we expect that trend to continue.”

Another sign is the drop off in deferral requests on commercial aircraft since the third quarter. Boeing Commercial Airplanes accommodated 215 deferral requests through the third quarter and it is continuing to work through that figure, but has not added to it in the fourth quarter. Its back log is currently at USD320 billion with USD254 billion from the commercial side. He also pointed out that the backlog represented five times its annual revenues. Bell indicated the company is far better off with a larger and more diverse order book today than it has been in previous downturns. He noted that the post-9/11 back log was at USD83 billion or 30% of today’s levels. 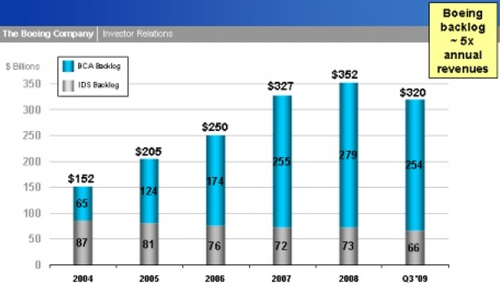 Mr Bell stated that despite near time traffic challenges, air traffic has grown at an average annual rate of 5% since 1978 and the company expects that to continue. Boeing forecasts, he noted, show airlines worldwide need 29,000 new aircraft with about 42% for replacement and remaining 58% for growth.

Production programs were impacted by economic challenges which drove lower delivery price escalation forecasts and decisions to reduce future twin aisle production rates, he said. The company reduced 777 rates from seven to five per month. Bell also said the company foresees no change in its assessment it can hold the current 737 build rate to 21 aircraft per month. The rationale, he said, lies in its conservative increase rates which meant that it did not increase production during the peak in favor of talking to customers to ensure it could stick with the 31-per month rate. The over-commitments, as well as a backlog of 2,000 aircraft, have given it the flexibility to maintain that rate.

“We are able to rely on fact that a large part of backlog is for replacement aircraft at about 40%,” he said. It was also able to hold the rate by assessing the growth of the low cost carriers since over 30% of its backlog is destined for them. Bell expects December to be a strong delivery month and, while BCA deliveries have varied throughout the year, the company expects to achieve the low end of its guidance this year.

Boeing has also enhanced its liquidity by issuing over USD6 billion in debt this year giving it additional financial strength, said Bell, adding the company is confident that it will generate USD3 billion in operating cash flow in 2009

It expects its defense services to grow 15 % this year to a total of USD13 billion in revenues which “continue to general strong margins for the company.” International defense accounted for 14% of defense revenues last year and the company is working to grow that to 20% over the next several years. In diversifying its defense portfolio it is focusing on adjacent services such as unmanned vehicles, cyber security and intelligence.

Bell refused to take the bait when a questioner noted that analysts were bearish on the 787 having implied it would fail, that it is overweight, that engines do not have enough thrust and it won’t meet performance requirements. Instead, he noted the recent progress on the tests, stating, “on the wing test we didn’t have to stop and the wing didn’t break,” he said to laughter. “We were able to complete the tests and the engineers felt good about tests. But the proof is in pudding and that why we have to go and analyze data which will prove whether or not it went well or not. Over next several days we’ll figure that out and make an announcement.”

Bell also noted that composite programs were not new given its experience on the military side and with the 777. “I can’t think of a program that wasn’t successful, that didn’t meet performance as advertised or even better than advertised. He noted the program has 840 firm orders 55 customers worldwide and said he expects it to be a big money maker for its customers, the company and shareholders.

He also has confidence ILFC will return to the market barring a meltdown of the leasing industry. As for a new narrow body, Bell indicated there are still too many variables to have a clear picture of what will be needed by the market. The same is true for the 777 and whether enhancing the capability will be enough to compete with the A350 or whether the market will require an entirely new aircraft.

On the South Carolina 787 production line, the company is planning a surge production at Everett while that is constructed. Once assurances the facility can meet customer obligations the Everett surge will be eliminated.

Bell noted the company has enough margin in the 737 that it could re-engine it with new technology engines such as the Pratt & Whitney Geared TurboFan. “The key thin on engine technology for a single aisle aircraft is reliability,” he said. “They are used multiple times a day and are turned quickly so any new technology has to withstand that operating model and performance reliability over the 30-year period. It we were to go that route, however, the cost would be 20-30% of the cost of a new airplane development program.

On the United order announced earlier in the day, Mr Bell stated it exceeded expectations. “Obviously we would have preferred to get it all but we understand their requirements,” he said. “We appreciate the order and, quite frankly, are glad to have them.” United split its widebody order for 50 aircraft between the Airbus A350 XWB and the Boeing 787 Dreamliner.”