As Boeing gets on with the certification processes for the B787, more details are emerging over the aircraft’s delivery schedule. Lead customer, All Nippon Airways, is due to receive its first aircraft sometime in 4Q2010, but news on deliveries to other carriers has been scarce.

Air India is now reportedly due to take delivery of the first of its B787s in 2Q2011, most likely in June. The aircraft will be quickly deployed on routes to Tokyo, Hong Kong, Singapore and destinations in Europe. Air India will be the third B787 operator.

Poland’s LOT confirmed yesterday that it will take delivery of five B787s in 2012, and one each the following three years.

Meanwhile, LAN Chile has reportedly swapped several B787 delivery slots with ANA, and will now take delivery of the tenth production aircraft in late 2010 and the 16th in early 2011. The swap of delivery slots has been made possible due to the number of deferred deliveries due to earlier production problems at Boeing.

Going on a diet

Boeing Commercial Airplanes VP Marketing, Randy Tiseth, meanwhile stated the manufacturer will trim some weight from the B787 from the seventh aircraft, the first full production unit after the six test airframes, through several design changes. The initial aircraft are reportedly several tons overweight, which the manufacturer is working to cut down on. The aircraft’s MTOW is also set to be increased at a later date.

Two B787s are already flying, with another two undergoing final modifications and testing before joining the flight test programme over the next two months. The final two test aircraft, and three of the initial production aircraft are now undergoing the side of body modifications, which had earlier delayed the first flight by six months.

Ten B787s are now believed to be undergoing the final stages of assembly and preparation, with another six on the assembly line. 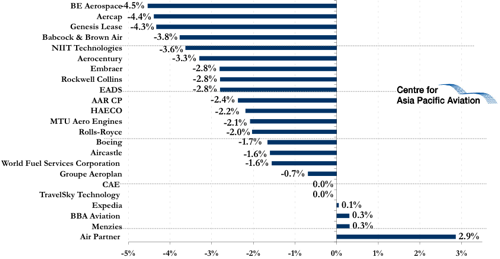