Boeing increases B737 production rate, but more B787 problems surface

Boeing announced yesterday that it is increasing B737NG production from 31.5 to 34 aircraft per month, or a 7.9% increase, in a decision that has been anticipated for several months. Boeing’s B737 programme stood out as a beacon of success in 2009.

Boeing is increasing B737NG output to satisfy “continued strong demand” for the aircraft. Of the 136 gross orders for the year to date, 75 have been for B737s. Boeing believes there will be an increased demand for type, especially for short/medium haul markets served by the B737, in 2012.

Airbus is having a less successful year with its narrowbody programme, with the A320 garnering only 18 orders for the year to Apr-2010. Bombardier’s new CSeries is also conspicuously absent from order books, although Republic Airways gave the programme a major boost in Feb-2010, with an order for 40.

Whether Airbus/Boeing will put new engines on their existing narrowbody programmes is unclear. A decision could take some time, with Airbus backing away from a planned announcement at this year’s Farnborough Airshow, to be held in July. In its production announcement, Boeing stated that it continues to study further potential B737 rate increases, given continued customer demand. With no replacements due until around 2025, the current narrowbodies will be the primary short/medium-haul platforms for some time to come.

In other aircraft news from Boeing, the company confirmed that it would rework the rear fuselage of the B787, after it was found that repeated heating/cooling cycles could result in the rear fuselage skin separating from the frame. According to a report in the Seattle Times, a fix using thicker shear ties has already been designed and is currently being installed on new build B787 airframes. The fix will be retrofitted to existing airframes, except for the three aircraft currently undergoing flight testing. The fix is not expected to delay the flight test programme or the delivery schedule.

In trading on Monday, Boeing shares were down 0.2%, as markets dropped on Europe’s debt woes. EADS gave up 2% after a strong session on Friday, while Bombardier was down 3.3% and Embraer lost 1.4%. 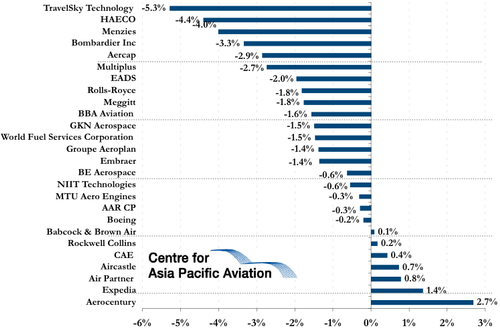