Boeing is on track for another strong year of aircraft deliveries, even though the first delivery of the B787 and B747-8 has been pushed back into 2011 by yet more programme delays. The US manufacturer delivered 124 commercial aircraft in 3Q2010, comprised of 100 B737NGs, three B767s and 21 B777s.

Airbus’ production is even stronger. The manufacturer delivered 380 aircraft over the first three quarters of the year, including 14 A380s and the first A330-200 Freighters. If delivery rates remain high over 4Q2010, the European manufacturer could deliver more than 500 aircraft in a 12-month period, the first time Airbus has achieved this milestone.

2010 is also shaping up to be a remarkable year for ordering, this time leaning in Boeing’s favour. Boeing confirmed 104 new orders this week, all for the redoubtable B737NG. Air Lease Corporation finalised its order for 54 aircraft, while Xiamen Airlines weighed in with another ten. 40 more orders were attributed to "unidentified customer(s)".

The orders put Boeing’s net total for the year at 392 (and 465 before cancellations), almost triple the number of aircraft ordered by Boeing customers last year. Narrowbody orders have dominated, with B737s making up seven out of every eight Boeing aircraft ordered this year. Boeing announced in Sep-2010 that it will be increasing B737NG production from 31.5 to 38 aircraft per month by 2013, to capitalise on the strong long-term demand for the aircraft.

Airbus’ orders have been more evenly spread, thanks to a number of high-profile widebody orders. Emirates ordered 32 A380s this year, while United Airlines ordered 25 A350s and Cathay Pacific another 30 A350s. Malaysia Airlines has also chipped in with a solid order for 15 A330-300s. Widebodies account for 143 of the 328 Airbus orders this year. EADS CEO Louis Galloi, forecast this week that Airbus would be increasingly profitable going forward, with investment in A350 XWB development due to peak in 2011 and the A380 programme moving towards break-even production in 2014/2015.

Boeing maybe winning the outright numbers race but widebody cancellations have put it on the backfoot in terms of total order value. Boeing has suffered the loss of 27 B777 orders and 32 B787 orders. High value, high margin widebodies account for just 40 orders, against 143 at Airbus. Not that either Boeing or Airbus have cause for complaint with their order books this year.

Elsewhere in the suppliers market, AAR Corporation shares gained 7.6% after the company raised its full-year revenue and earnings outlook. The company is forecasting revenue of USD1.6-1.7 billion and earning of USD1.35-1.50 per share. The improved outlook is due to better business in its government and defence services unit, as well as the recent acquisition of Aviation Worldwide Services, which could add USD60-65 million to AAR’s profits this year. The performance of the company’s commercial aerospace business is also improving, with margins forecast in excess of 10%.

AAR Corp is continuing to look at acquisition opportunities in the commercial and defence sectors. 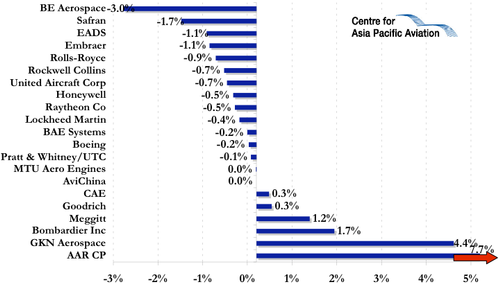 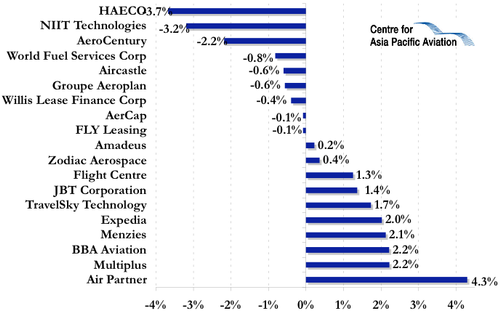