Aviation suppliers and aerospace manufacturers are destined for tough times over the remainder of the year, with Standard and Poor’s forecasting that the US economy will trickle back into “tepid” positive territory in early 2010. The commercial aerospace industry will feel the pinch particularly, with slowing aircraft orders and production, notably in the business aircraft sector, as well as poor performance in aftermarket sectors.

S&P has forecast that Boeing and Airbus will not be as badly affected by the downturn in industry fundamentals, given their strong order backlogs. Size, it seems, is some insulation from the continued GDP contraction in the world economy. Moody’s Ratings Service agrees, reaffirming its ‘A1' rating for Airbus parent, EADS, with a 'stable' outlook.

The major cause for concern is the uncertain delivery outlook, with continued deferrals and cancellations from airlines worldwide. However, both companies' military markets are expected to remain lass affected, providing further insulation from the vagaries of the commercial market. The significant challenges of the delayed A400M and new A350 XWB programmes are putting EADS' cash surplus under pressure and are weighing down its operating margins.

In trading yesterday, both Boeing and EADS were up 2.0%, much in line with the overall gains on US and European stock markets.

Expedia was up 4.5% yesterday, with the resolution of a case in the California appeals court, resulting in Expedia and fellow online travel agency, Hotwire, paying USD35 million in hotel occupancy back taxes to the City of San Francisco. Expedia reportedly was liable for USD32 million, but this could be the first of several cases against Expedia and other online travel and booking agencies, such as Orbitz and Hotels.com.

Rolls-Royce climbed 2.2%, after announcing a new deal to supply Air New Zealand with Trent 1000 engines to power its B787-9s. 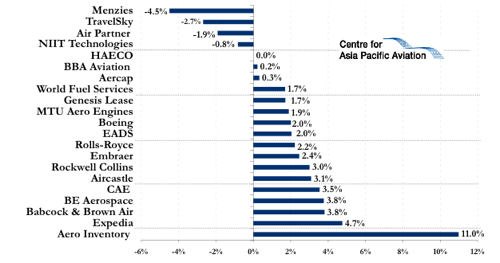