Shares in Boeing and Airbus parent EADS rallied on 14-May-09, mostly due to orders outside of their commercial aircraft units, while aircraft lessors have had a mixed day, after falls earlier in the week.

EADS shares rose 4.2% yesterday, after the UK Government confirmed that it intends to acquire a third tranche of the company’s Eurofighter. The UK Ministry of Defence has not stated how many aircraft it intends to buy. EADS also recently signed an agreement with Malaysia Airlines to establish a turboprop MRO facility near Kuala Lumpur by 2010.

Boeing posted a smaller rally, up 1.1%, following a USD1.2 billion Italian order for Chinook helicopters. The aircraft manufacturer has also been buoyed the US House of Representatives passing a USD96.1 billion defence bill, which includes more than USD3 billion for military transport aircraft.

HAECO, a big upwards mover earlier this week on rumors that Cathay Pacific intended to sell some or all of its stock in the company, dropped 3.2%. Cathay confirmed mid-week that it has no intention of selling its shareholding in the company. Cathay's rival, Singapore Airlines, has announced plans to give its entire stake in SATS to shareholders in the form of an in specie dividend, after reporting a very difficult fourth quarter ended 31-Mar-09. 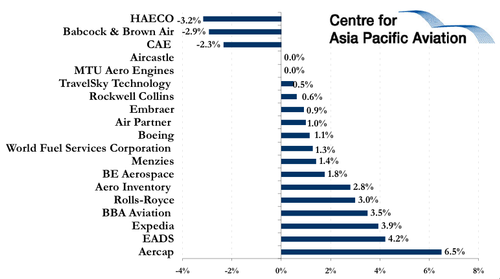