Boeing, Airbus share honours in 2013 orders/deliveries race - but it's not about winners and losers

The not-quite-friendly competition between Boeing and Airbus, as to who can take the most orders and deliver the most aircraft, has seen mixed honours awarded for 2013.

Boeing announced its full year tally last week, delivering 648 aircraft and taking 1,355 orders net of cancellations (1,531 gross). Airbus announced its own orders and deliveries at the beginning of this week. The manufacturer delivered 626 aircraft for 2013 and announced firm orders of 1,503 aircraft (1,619 gross).

But the more important statistic is simply the enormously successful year for both major manufacturers, with ATR, Bombardier and Embraer also experiencing solid growth in 2013 orders and deliveries.

Fuel prices and strong travel demand have pushed the numbers up, but 2014 is less likely to create new records as massive backlogs outweigh production rates.

Both manufacturers had very strong finishes to the year. Airbus booked 211 firm orders in Dec-2013 alone. It announced orders for 100 A320s from an undisclosed customer and 20 from another undisclosed buyer, as well as 25 A330s from AirAsia X, 50 A380s from Emirates, six A350s from Air Caraibes and seven A320s from Turkish Airlines.

Airbus also cancelled five A380 orders and five A350 orders from the terminally ill Kingfisher Airlines, as well as 12 A320s from United Continental.

Boeing booked 319 orders in the same month. Like Airbus, it booked a considerable number of orders from undisclosed customers – in Boeing’s case 174 aircraft, comprising 49 773 MAX aircraft from five buyers, 132 737NGs, also from five different buyers, two 747-8s from another buyer and a single 777-300ER from an unidentified customer.

Given the level of ordering and deliveries, the “winners” and “losers” storyline being played out in most of the major media outlets over the annual competition between the two manufacturers is beside the point.

The real point is that 2013 has been a staggeringly successful year for both companies and their sales teams. 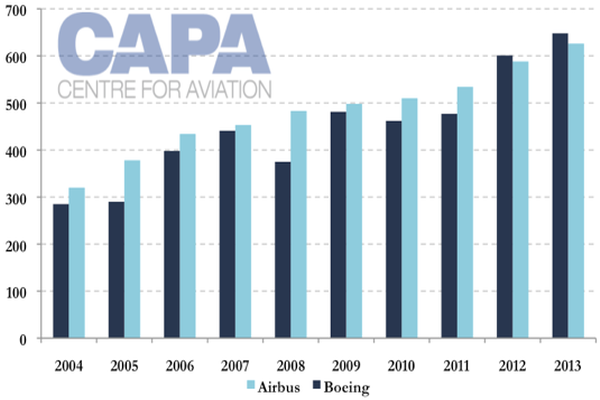 Market shares have settled at near-50:50

The difference between the two manufacturers in terms of raw numbers is a matter of a few percentage points, as it has been for most of the past decade. Last year Airbus and Boeing delivered almost 1,300 aircraft between them. 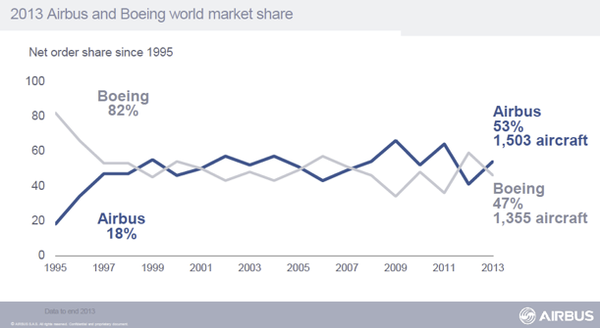 Narrowbodies – for expansion and replacement – are driving numbers

Output from the manufacturers is set to grow again in 2014, with Airbus and Boeing each planning to continue their incremental build-up in reaction to market demand.

The chief vehicles of the vastly increased delivery levels are the A320 and 737 narrowbody families. Both manufacturers are churning out their staple aircraft at a rate of around 40 aircraft per month – and further increases are looming.

In Oct-2013, Boeing announced that it would increase production on the 737 from 38 to 47 aircraft per month in 2017, the highest rate ever for the programme. Once implemented, the 737 programme will build more than 560 aircraft per year (nearly equivalent to total Boeing production of all aircraft in 2012), an increase in output of nearly 50% since 2010. Boeing plans for 737 production to hit 42 aircraft per month during 1H2014, matching output levels at Airbus.

Airbus’ intention is to remain at this production level for 2014 and to transition from A320ceo (current engine option) to A320neo production at that rate. However, at the company’s orders/deliveries announcement, Airbus executive vice president for programmes Tom Williams said A320 production could be raised to 44 or 46 aircraft per month, and output of the A320neo had the potential to go as high as 50 aircraft per month beyond 2018 or 2019. In 2012, Airbus stepped back from plans to raise A320 output to 44 per month.

If all goes well for the A350, Airbus will begin delivering aircraft in 4Q2014 and plans to be producing 10 aircraft per month by 2018.

After taking nearly 2,800 firm orders for the year between them, both Airbus and Boeing are also sporting record firm order backlogs. Airbus has orders for 5,559 aircraft, representing eight-plus years of sustained production. Boeing has 5,080 unfilled orders in its backlog. 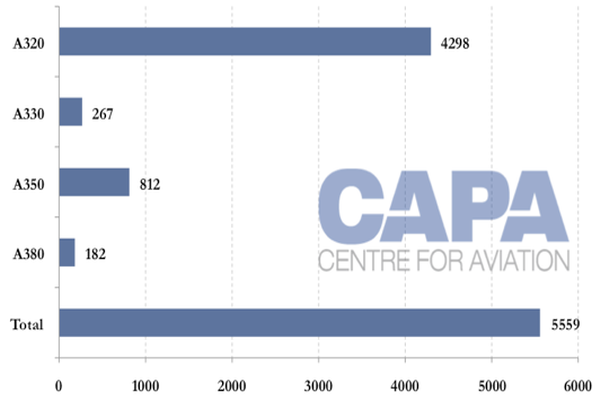 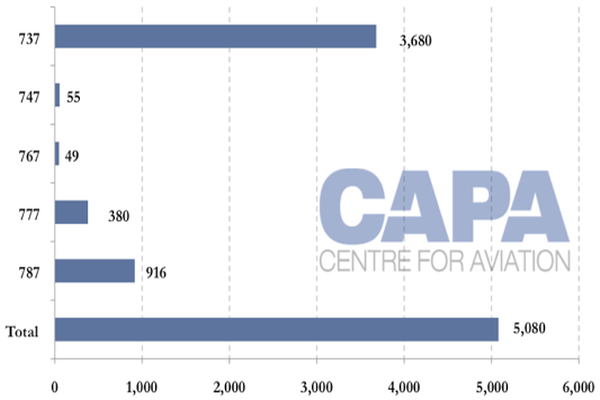 Unsurprisingly, narrowbody aircraft dominate the order books, with combined orders for almost 8,000 aircraft between the two manufacturers, representing around 75% of all orders. New generation widebodies such as the 787 and the A350, account for 1,728 aircraft, around 16% of orders.

Not all aircraft types are finding favour with airline customers.

The market for the large four engine widebodies – the A380 and 747-8 – remains weak, despite some recent order successes. Boeing won 17 orders from five customers for the 747-8, although it lost five orders through cancellations for the year. Airbus won a firm order for 50 A380s from Emirates in Dec-2013, although it lost eight A380 orders in 2013, due to cancellations. 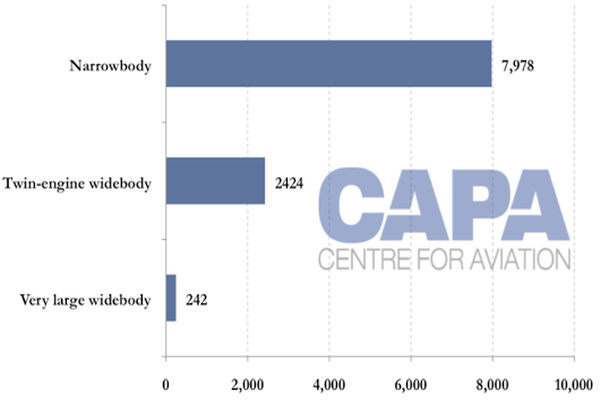 ATR, Bombardier, Embraer all had good years too

On top of the success at Airbus and Boeing, the western regional aircraft manufacturers – ATR, Bombardier and Embraer – continue to add their contributions to global airline fleets, albeit on a significantly smaller scale. Although ATR and Bombardier have yet to report their full-year tallies, the smaller manufacturers are projected to have delivered somewhere around 225 to 230 commercial airliners in 2013. The three of them have also recorded orders for better than 500 aircraft.

Embraer also enjoyed significant sales success in 2013, notably boosted by the launch of the second generation E-Jets aircraft programme (E-Jets E2), the first of which is slated to enter service in 2018. It logged 150 firm orders for the update to its E-Jets family, in addition to more than 180 orders for its current-generation E-Jets aircraft. There are another 215 E-Jets E2 commitments from six customers, mostly unidentified, waiting to be converted into firm orders. The company finished 2013 with a firm order backlog of 429 aircraft, almost five years of production at current rates.

Bombardier has reported 34 commercial aircraft deliveries (19 Q400 turboprops and 15 CRJ regional jets) for the nine months to the end of Sep-2013, matching its 2012 levels. As with Embraer, the final quarter of the year is traditionally a strong one for deliveries for Bombardier. Earlier in 2013, the Canadian manufacturer forecast commercial deliveries for the year of 55 aircraft, compared with the 50 aircraft delivered in 2012. Bombardier has recorded orders for more than 134 commercial aircraft this year, including 37 for its new CSeries aircraft.

Specialty turboprop manufacture ATR has forecast full-year deliveries of around 80 aircraft. This is a significant increase from the 64 delivered in 2012, already a record for the company. ATR has also experienced record ordering in 2013, noting the resurgence in demand for its aircraft due to fuel efficiency on certain missions. The company logged orders for 83 aircraft at the Jun-2013 Paris Air Show alone, securing its production slots until the end of 2016. It has already started 2014 in the same vein, logging an order for three ATR72-600s on 06-Jan-2014.

Airbus, Boeing and Embraer net firm orders and deliveries for 2013

Fuel prices have become an important driver of new aircraft demand. But unusually high traffic growth relative to GDP increases has also been a key ingredient.

Air travel demand has continued to grow, seemingly regardless of economic conditions and expectations of GDP/traffic growth correlations, with long-term projections of demand growing at better than 5% p/a. The past decade has witnessed the explosion of the Asia travel market, driven by China and the growth of low-cost airlines. Middle Eastern demand has taken off as well, while the North American and European markets have continued moderate growth, even in the face of economic uncertainly.

In addition to this, the new norm of high oil prices ensures demand for newer, more efficient aircraft. Prior to 2004, labour, not fuel costs, occupied the largest proportion of airline operating costs. Since then, the price of jet fuel has more than tripled and now accounts for almost a third of global airline costs.

In 2003, the average price airlines paid for fuel globally was USD28.80 per barrel. A decade later, it is USD124.60 per barrel. According to IATA, global airline fuel expenses have increased from USD44 billion in 2003 to USD210 billion in 2012. The rise in oil prices has fundamentally altered the economics of the airline industry. 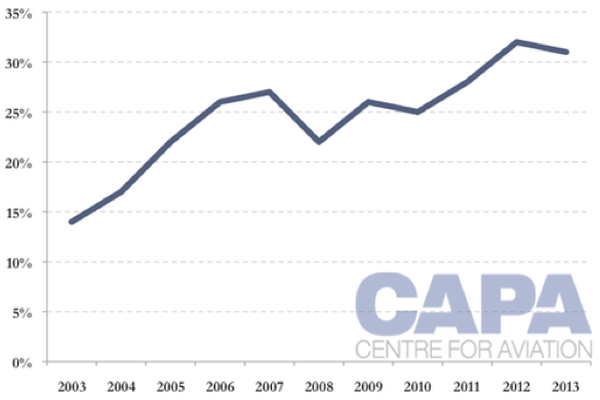 As a result, airlines are retiring older aircraft and seeking newer, more efficient replacements. Less efficient quad-jets, such as A340 and older 747s have seen their residual values plummet, with leasing companies like ILFC taking multi-billion dollar write downs on asset values in the last three years. Even newer aircraft, such as A320s, are seeing pressure on their lease rates and residual values, with more fuel efficient replacements set to enter the market over the next few years.

Manufacturers have taken advantage of the opportunity. Instead of betting their businesses on major new development programmes like the 787, A380 and A350, manufacturers are increasingly opting for a lower risk approach of re-developing existing airframes with new engines and other improvements. The strategy means manufacturers can deliver an enhanced product in a short time frame, while still offering double-digit enhancements to fuel burn and reductions in maintenance and operating costs that airlines seek to justify the purchase price.

The strategy has proven highly successful. The re-engined narrowbodies – the 737 MAX and A320neo – have won almost 4,400 orders between them. Boeing scored 259 orders for the 777X launched earlier this year. Even Embraer has seen the tactic pay off, with 150 firm orders and another 215 purchase commitments and options for their aircraft. Airbus has stated a re-engined A330 is an option, although not the only one for the family. Bombardier, bucking the trend with its all-new CSeries, has not yet seen similar success, with 182 firm orders for the aircraft in five years.

Neither Airbus nor Boeing expect a repeat of 2013 ordering levels in 2014. Both Airbus and Boeing sales teams are lamenting a lack of delivery slots, even as aircraft production is at a record pace. Most major carriers have weighed in with their orders and delivery slots for the most popular types are increasingly scarce.

More than 1,500 western-manufactured aircraft were delivered to commercial airlines in 2013, an unparalleled rate of expansion for global commercial airline fleets. If production rates at Airbus and Boeing rise as expected in 2014, global deliveries could top 1,600 for the year. Airbus intends to retake the number one delivery position from Boeing in four to five years time – giving Boeing a six to seven year stretch leading deliveries – by which time global aircraft deliveries could well be closing in on 2,000 aircraft per year.