The last CAPA report into Berlin Brandenburg Airport (Dec-2019) declared that it was finally set to open in Oct-2020 and asked: “What can go wrong now?” Well, now we know.

The story of Brandenburg’s financing and construction, and the huge problems it encountered with its electrical wiring and fire control systems, is a long one, and has been chronicled many times by CAPA. In Dec-2019 it was reported that there were concerns that the new airport might even be demolished and rebuilt on account of the technical issues it had faced.

Terminal 1 has now been certified to handle passenger operations upon commissioning of the airport on 31-Oct-2020. FBB can now start preparations for operational readiness and airport transfer (ORAT) activities at the terminal. At the same time, final interior renovations for retail concessions will be carried out in the coming months.

The opening date is ‘reconfirmed’ with the news that the terminal building, which once had thousands of faults, has been cleared to handle passengers, but the new challenge will be to convince airlines to return and carry on where it all left off.

Flughafen Berlin Brandenburg GmbH (FBB) reported on 28-Apr-2020 that the Dahme-Spreewald district's building supervisory authority had certified the completion of construction of Berlin Brandenburg Airport Terminal 1 and its readiness for opening.

Terminal 1 is now certified to handle passenger operations upon commissioning of the airport on 31-Oct-2020.

FBB’s CEO Dr Engelbert Lütke Daldrup said that the certification is one of the most important steps in the process of commissioning Brandenburg Airport. "It has been a long and difficult road [but] the hard work of the last three years was successful in the end".

FBB can now start preparations for operational readiness and airport transfer (ORAT) activities at the terminal. At the same time, final interior renovations for retail concessions will be carried out in the coming months.

Aviation missing its pioneering spirit? Environmental issues take a back seat for now

When the new Berlin Airport was first envisaged, literally decades ago, and never mind when it should have opened – nine years ago, could anyone have foreseen the circumstances under which that would now happen?

In their own way, events could be as dramatic as they were at the old Tempelhof Airport in the wake of World War 2, when that airport was at the centre of the Berlin Airlift, an event which spawned the likes of the 1970s low cost trans Atlantic pioneer Sir Freddie Laker.

Unfortunately, there are few such pioneers around now when the aviation business needs them.

Richard Branson is battling to save his Virgin airline brands from going under, and Bjørn Kjos has stepped back from his baby, Norwegian, which is similarly threatened. Ryanair’s Michael O’Leary is threatening never to take to the skies again if he has to leave the middle seat empty.

The story of Brandenburg Airport’s financing and construction, and the huge problems it encountered with its electrical wiring and fire control systems, is a long one, and has been chronicled many times by CAPA.

In the most recent report on the airport (Dec-2019) CAPA said:

“Promises are being made that this deadline (to open, in Oct-2020) is the last one, but some funding still needs to be found. And it will require two different operating models (full service and low cost) to come together under the same roof. Some disquiet has already arisen over that, with LCCs complaining that they are getting a raw deal. Questions continue to arise.

The nature of the business has changed over the last 20 years since the airport was first envisaged. Has so much effort been put into resolving the fire control/electrical system problems that today's pressing environmental measures had to take a back seat?”

Well, for now, environmental measures will have to take a back seat. Brandenburg’s problems are not so much those of capping emissions from jet aircraft as finding those aircraft to operate there at all.

‘What else can happen now?’ The unexpected. Again

In the Dec-2019 report the question was posed, “What else can happen now?” Even at that time, there were concerns that the new airport might even be demolished and rebuilt on account of the technical issues it has faced.

No one, in Europe at least, could have foreseen a situation in which so many of the flights operating at the two existing airports would be cancelled.

The operator, Flughafen Berlin Brandenburg GmbH (FBB), had already forecast a reduced operating result in FY2020 due to a one-off charge for ORAT procedures for the commissioning of the airport. Such a result would have been very welcome, in light of what has happened since.

FBB announced that the company would be temporarily dependent on financial aid due to what was, then, a 75% decline in traffic at Berlin Tegel Airport and Berlin Schönefeld Airport. FBB shareholders had already approved a business plan to make a one-off payment of EUR300 million in 2020 in response to the crisis.

While the flight statistics for Apr-2020 will undoubtedly be worse, there is nothing new here, in that many airports are reporting similarly catastrophic reductions – or even worse.

The airport has to attract the airlines back – and prioritise them

But in Berlin’s case, it now has to attract airlines back generally, as well as determining the priorities between full service and low cost.

Looking at the seat capacity by airline chart for the week commencing 09-Dec-2019, when that previous report was published, it can be seen that low cost carriers, led by Ryanair and easyJet, were dominant at Schönefeld Airport, the one around which the new airport has been built.

LCCs also account for 50% of seats at Tegel, which is a busier airport and almost twice the size of Schönefeld.

Both Ryanair and easyJet could make a comprehensive return but...

So LCCs will be a priority for the new airport and some re-evaluation of how to handle them might be called for. LCCs are historically more entrepreneurially managed than full service carriers and have more of a risk-taking philosophy.

EasyJet’s most recent statement (16-Apr-2020) was that "at this stage, there can be no certainty for restarting commercial flights", but “it is working through different demand scenarios for commencing services which could be done with as little as two weeks' notice.” EasyJet would implement the 'unbookable middle seat' scenario, but does not believe it would be viable in the long run.

Ryanair is against the idea altogether, as above. It is operating an interim schedule (which does include Berlin) until 14-May-2020 and, worryingly for many airports, has already asked some of them to lower charges in order to “incentivise” operations.

A further concern for the airport must be that Ryanair is openly seeking a fares war whenever it can start one. Cashed up to the tune of EUR4 billion or more, which it stores in multiple bank deposits, the Irish airline could afford to do that if a more comprehensive network was introduced from, say, Jun-2020; the comparatively weak positions of many of its rivals could well mean that it wipes them out.

In contrast, Brandenburg might find it harder to lure back some of the network carriers, partly on account of it already being weak in the long haul segment.

Moreover, Lufthansa, which is considering applying for creditor shielding procedures as negotiations with the German government over EUR9 billion in state aid intensify, will probably wish to focus its revival efforts on its main hubs at Frankfurt and Munich rather than at peripheral ones like Berlin, which were never high up its list of priorities.

At least Germany is ‘coming back’

And that prioritising might come sooner than expected, since Germany was one of the first major European countries to start to remove some of its lockdown provisions with a slow but noticeable increase in flight operations at several airports and the opening of some retail facilities within them.

For now, the task that faces the new airport is suggested in the chart below, showing seat capacity at Tegel Airport and the degree by which it diminished in Mar-2020 (the chart for Schönefeld is similar). 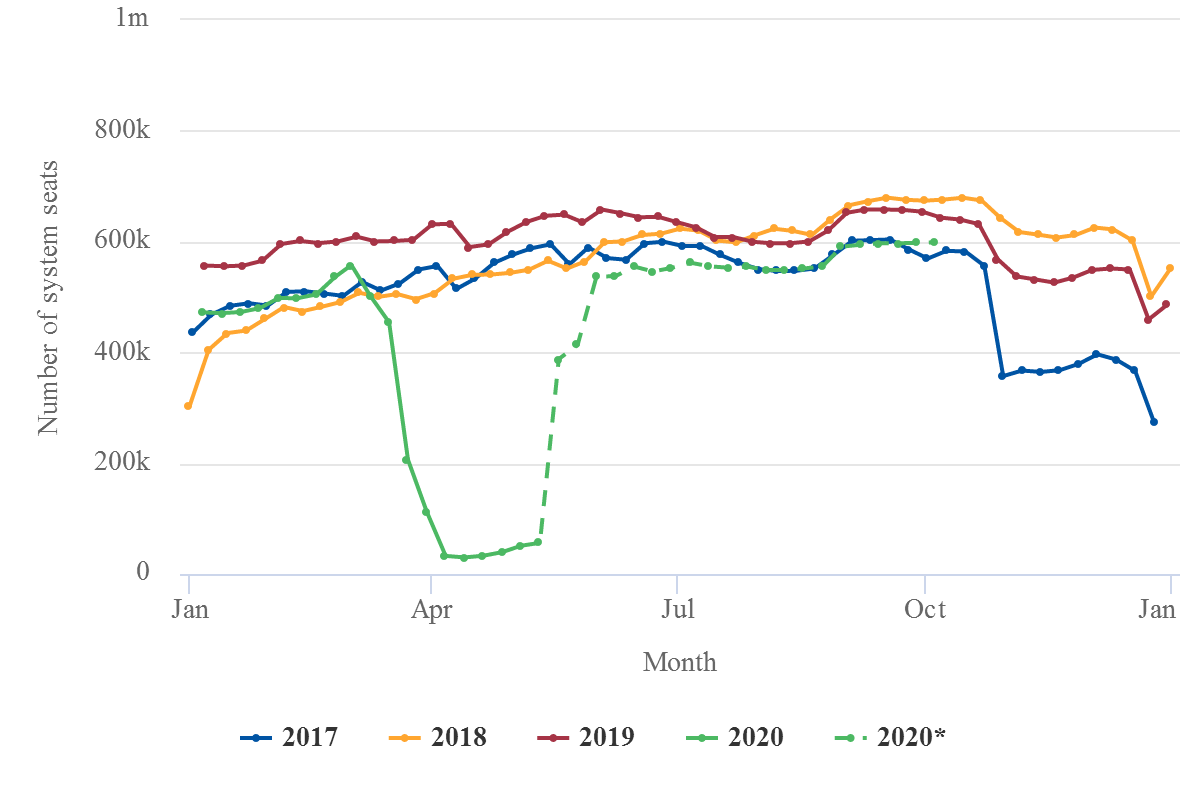 The one benefit of the current situation – if it can be so described – is that at least there will be no need to retain Tegel as a working airport after Brandenburg opens, an issue which had been hotly debated in the past.