Beijing Airport shares rose 8.1% on 16-Mar-09, as Asian stock markets lifted on comments by US Federal Reserve Chairman, Ben Bernanke that an economic recovery in the US would occur next year. Investors are seizing any positive news, even if the near term outlook remains very bleak.

Air China, Beijing's biggest carrier, announced an 18.5% increase in domestic passenger numbers in Feb-2009, although international volumes dropped 11.8%. The carrier stated that despite the double-digit year-on-year increase in passenger traffic in Feb-2009, "the impact of the financial crisis is yet to be fully revealed".

Meanwhile, Vienna Airport's shares rose a further 5.6% yesterday amid broader market gains across Europe. Austrian Airlines' future within the Lufthansa Group appears a setp closer as EU Transport Commissioner, Antonio Tajani, declared at the weekend that he does not see competition issues arising in Lufthansa's takeover offer for shares in the Vienna-based airline. 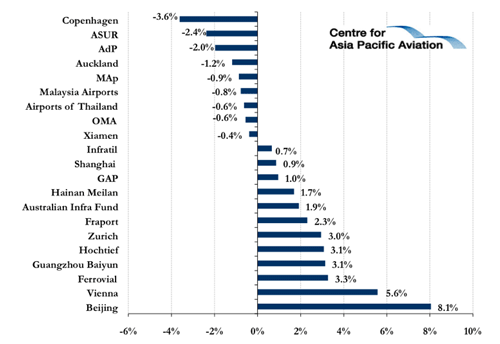