Several airlines have moved quickly to fill the void left by the grounding last week of Cimber Sterling, although not one specific carrier will make major inroads. The LCC/regional operator accounted for only about 8% of seat capacity in its Danish home market and the market is highly fragmented. SAS is the largest carrier in Denmark and provided about one third of total seat capacity prior to Cimber Sterling’s bankruptcy while Norwegian Air Shuttle is the country’s second largest airline, with about a 14% share of capacity (seats), according to data from Innovata.

Copenhagen Kastrup Airport is Norwegian’s third largest base in terms of weekly seat capacity after Oslo and Stockholm Arlanda. It was the first airline to take the plunge and open a base at Copenhagen when Sterling went bankrupt in 2008. Cimber Sterling’s failure will create opportunities for Norwegian to further build its Copenhagen base with additional Boeing 737s and increased frequencies on routes on which it competed with Cimber Sterling such as Barcelona, Malaga, Nice, Prague and Rome Fiumicino. Even before the grounding of Cimber Sterling, Norwegian had planned to base more aircraft at Copenhagen as of Jun-2012.

Norwegian also reportedly intends to resume the Copenhagen-Karup domestic route, which it abandoned last year, leaving it the sole territory of Cimber Sterling. Norwegian operated a 737-800 on the route, but is now expected to switch to a smaller 737-300.

Danish Air Transport (DAT) has promptly stepped in and has launched two of the four domestic routes which were exclusive to Cimber Sterling - Copenhagen to Sønderborg and Bornholm. With Norwegian expected to resume service to Karup that will leave only Copenhagen- Billund without any service. 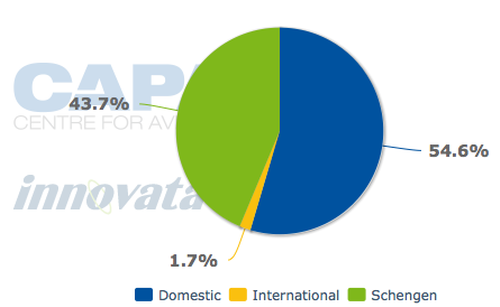 DAT CEO Jesper Rungholm says DAT is now in talks to negotiate interline agreements with other carriers. "Our clear goal is that passengers get the same great experience of traveling by DAT, as they had with Cimber Sterling, therefore we are working to deliver a full service and interline program,” Mr Rungholm says. He adds: “DAT has in recent weeks has flown for Cimber Sterling and we have worked closely with them. It is not the first time we fly domestic routes in Denmark, and we look forward to doing again.” 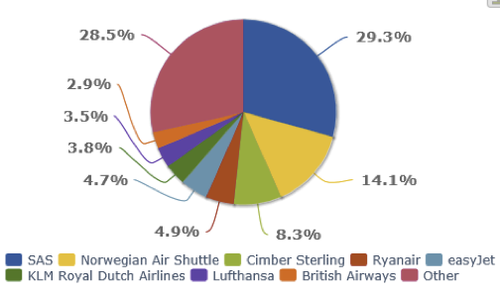 Also Sun-Air of Scandinavia has jumped on the opportunity to expand its regional network and as of 7-May-2012 began operating three former Cimber Sterling international routes: Billund-Oslo, Billund-Stockholm-Bromma and Aalborg-Oslo. The small regional carrier is based at Billund airport and operates scheduled regional services in the Nordic region using the British Airways brand under a franchise agreement that has been in place since 1996.

Billund is a quickly expanding Ryanair base and Sun-Air differentiates itself from the LCC by emphasizing that it “goes in the opposite direction” and offers passengers a free meal and drink on board. Sun-Air also operates smaller aircraft, allowing it to focus on regional routes that are generally too thin for LCCs. According to CAPA, Sun-Air’s fleet currently consists of Fairchild Dornier 328JETs, five Dornier 328 turboprops and one Jetstream 31.

Sun-Air in Mar-2012 took over the Billund-Munich route from Cimber Sterling, as the latter refocused on a more Scandinavia centric strategy. Sun-Air owner Niels Sundberg reasoned at the time that: “The fierce competition and the high fuel prices make it very difficult to make a reasonable profit, but we believe that our aircraft are ideal for the Munich route and have decided to go for it.”

While most competitors were quick to seize the opportunities, Cimber Sterling’s bankruptcy is bad news for SAS, which codeshared with the carrier on most of its routes, including six domestic routes. As Cimber was the sole operator on four of these routes SAS could lose domestic connectivity at its Copenhagen hub. 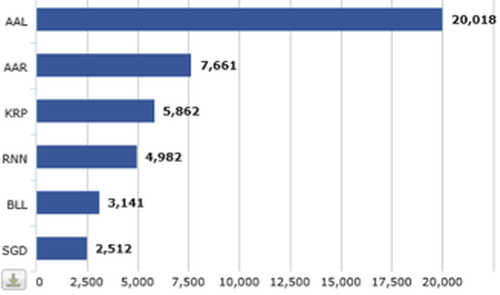 SAS has announced it is adding flights in light of the development but acknowledged that the bankruptcy of Cimber Sterling will affect some of its flights in the meantime. “It is inevitable that this situation will affect SAS traffic,” SAS said in a statement cited by The Copenhagen Post. It called Cimber Sterling’s bankruptcy “deeply regrettable" and said that is working to get schedules back to normal as soon as possible, although it did not confirm when that would be.

If SAS can shake of some of its burdensome legacy practices, as it is trying to do under Group President and CEO Rickard Gustafson, it could benefit from Cimber Sterling’s grounding and put its hand on the capacity share of its former codeshare partner on routes from Copenhagen to Rome Fiumicino, to Nice, Barcelona and to Palma de Mallorca. However on all these routes if faces stiff competition from LCCs such as Norwegian, Vueling and Air Berlin.

Opportunity for Flybe Nordic to make its mark

The grounding of Cimber Sterling has presented Flybe Nordic a good opportunity to realise its touted ambitions and establish itself as a real Nordic regional player.

Flybe Nordic, the 60:40 joint venture with Finnair, already serves Copenhagen-Stockholm-Bromma and recently announced plans to significantly expand its presence in Denmark in 2013. The Cimber Sterling debacle would bring these plans forward.

According to reports in Danish media, Flybe Nordic (formerly Finnish Commuter Airlines Oy, which was trading as Finncomm Airlines) has engaged in discussions with the administrators of Cimber Sterling to secure some of its ATR aircraft to use on Danish domestic routes. Routes under consideration are: Copenhagen to Aalborg, Billund, Bornholm, Karup and Sønderborg. 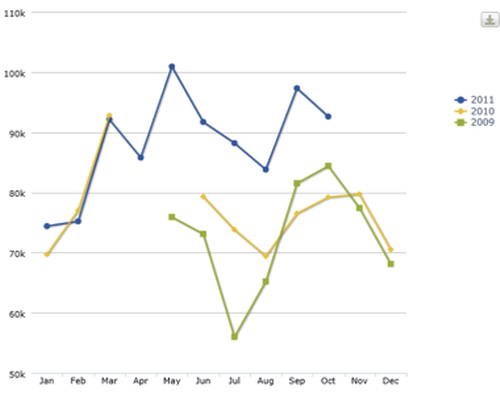 At the time of its collapse, Cimber Sterling operated on a network spanning 27 routes. Its main bases were at Copenhagen and Billund, with a smaller base at Aalborg. 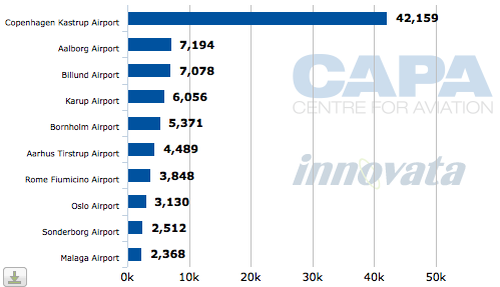 Copenhagen Airport does not expect any adverse effects on its traffic and is maintaining its outlook for 2012. “Cimber Sterling accounted for approximately 6% of CPH traffic. Several routes have already been replaced by other carriers. CPH is furthermore in talks with a number of airlines to fill the remaining routes,” the airport said in a statement. It added: “Based on the current information CPH still expect the total number of passengers to increase compared to 2011. And overall, a higher total profit before tax, when excluding one-off items, is expected for 2012.”

Copenhagen Airport positions itself as a hub airport, although LCC traffic is growing helped by the opening of dedicated a low-cost pier, CPH Go, in 2010. The number of low-cost passengers at Copenhagen airport in 2011 was 6.2% higher than in 2010. LCCs had a market share of 17.9% in 2011, equivalent to the market share held in 2010, according to the airport. This could see an upswing if Norwegian decides to make use of Cimber Sterling’s grounding to heighten is footprint at the airport.

On a national level, LCC penetration in Denmark is higher than at its largest airport due mainly from the Ryanair base at Billund airport 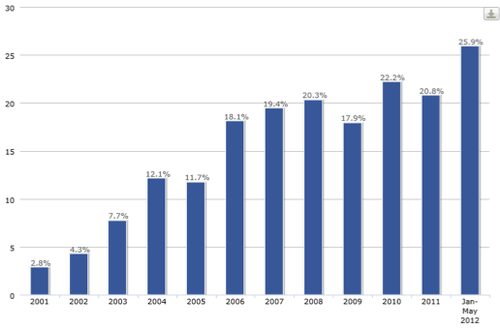 Cimber Sterling failure is not a surprise

Cimber Sterling was a difficult venture from the outset. In Dec-2008 it bought parts of Sterling Airlines, which had filed for bankruptcy in the wake of continuous financial difficulties and the failure to find a buyer willing to invest. Norwegian has looked at the carrier as it wanted to expand in Denmark, but opted against an acquisition after concluding that its cost base was too high and out of fears of unmanageable integration cost.

Cimber Sterling Airlines was established in Jan-2012 and positioned itself as a hybrid/LCC but it struggled with weakening demand, high fuel prices, increasing LCC competition in its home market combined with a lack of a clear strategy. In Aug-2012 the struggling carrier was given a new lifeline by Cypriot-based Mansvell Enterprises Ltd, which also holds interests in the Swedish regional carriers Skyways and City Airline. In Dec-2012 it unveiled a new strategic direction aimed at becoming the leading regional carrier in the Nordic region, focussing on business on domestic services in Denmark and Sweden as well as regional services from Scandinavia and leading to it pulling out of the very competitive medium-haul market. Changes for the carrier included streamlining its fleet from three to two aircraft types through the removal of its Boeing aircraft.

“The board of directors and the management team have worked intensely to ensure a turnaround of the company for several months but unfortunately we did not succeed before we ran out of time,” Cimber Sterling CEO Jan Palmer said in the statement. It is expected that the administrators for the bankrupt airline and management shortly will announce a plan concerning the future of the company activities.
“The management team will work closely together with curator to ensure as much value as possible in the company and to continue as much of the operation as possible under a reconstruction of the company,” Cimber Sterling says. “At the same time we will suggest that we together with curator explores the possibilities to operate more aircraft and thereby ensure as much value as possible for a possible buyer.”

Cimber Sterling is not the first carrier to go down in Europe this year. Spanair and Hungary’s Malev are just two other examples, and several other airlines could close shop in the coming months. IAG, parent company of British Airways which acquired bmi from Lufthansa, has already announced it will stop the operations of bmi’s LCC subsidiary bmibaby, which has lost GBP100 million (USD162 million) in the past four years. The fate of bmi Regional is equally uncertain.

Cimber Sterling was a small carrier struggling to survive and its disappearance will not be felt for long. As was the case with Spanair and Malev, its network and traffic will migrate to more fit competitors in a very short time span. LCCs will swallow up Cimber Sterling’s routes to leisure destinations in South Europe and regional players will quickly take over its thin routes in Scandinavia.