It is a major blow for Citi/YVRAS, which last month pulled out of the Chicago Midway.

Fraport shares eased 3.3% yesterday as the company confirmed its full year Group profit would fall short of the 2008 level. The Group’s passenger numbers eased 2.1% in Apr-2009 to 5.5 million, including a 4.7% reduction at Frankfurt Airport to 4.3 million.

Elsewhere, Vienna Airports’ shares were 5.8% lower, as Lufthansa announced it received acceptances for over 85% of the share capital of Austrian Airlines.

Airports of Thailand’s (AoT) shares surged as Thai Airways reported better-than-expected first-quarter profits. Traffic levels however remain depressed. Earlier in the week, AoT reported the six international airports in Thailand reported a 14.2% reduction in passenger traffic in March, to 4.78 million passengers, as compared with a drop of 20.6% in the previous month. At Bangkok’s Suvarnabhumi Airport, passenger numbers fell 11.1% to 3.5 million. 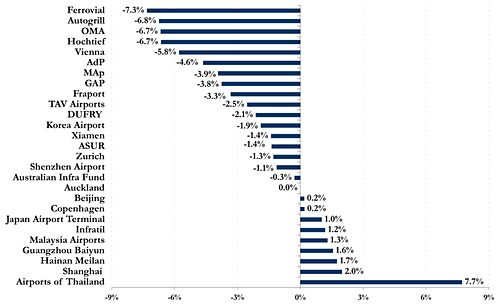