Amid the heavy snow falls and general transport chaos in the UK, a significant ruling in the long-running saga of the BAA break-up occurred yesterday.

The Competition Appeal Tribunal (CAT) upheld the airport operator’s appeal over a ruling that it must sell London Stansted and either Edinburgh or Glasgow airports, on the grounds of “apparent bias”, in relation to an advisor to the Greater Manchester Pension Fund (which is a shareholder in the Manchester Airport Group) which formed part of the consortium which bought Gatwick Airport.

BAA issued a short statement, noting only that it is “pleased” with the decision and that further discussions “should now take place with the Competition Commission, as the CAT suggests, to determine the appropriate response to this judgement”. This could stretch well into 2010, indefinitely deferring any moves to sell Stansted. This has infuriated Ryanair, which was quick to respond, noting it was “deeply disappointed” by the CAT decision. Ryanair stated the sale of Stansted Airport has the support of the "overwhelming majority of airline users and passengers".

The LCC however welcomed the Tribunal’s findings on the “substantive elements” of the BAA’s appeal, in which it dismissed the BAA’s claims that the Competition Commission did not take the timing of divestiture into account.

Ryanair also "welcomed the fact that the Tribunal did not conclude that the Competition Commission’s decision to break up the BAA monopoly was wrong".

CEO, Michael O’Leary stated his airline “calls again on the BAA, and the Competition Commission to agree remedies relating to Prof Moizer’s involvement with the purchaser of Gatwick Airport and then move quickly to progress the sale of Stansted and one of the Scottish airports in order to speed up the introduction of competition, lower costs and service improvements for airlines and consumers at Stansted and the Scottish airports”.

Meanwhile BAA’s parent, Ferrovial, confirmed plans to reorganise a massive EUR22.2 billion of company debt, with its units including BAA to replace loans with bonds and extend the maturity of borrowings. Ferrovial’s shares rose 1.4% to EUR7.745 yesterday. The stock has gained 46% so far this year.

Elsewhere, it was a strong day for Asian airport stocks, with Malaysia Airports and Shanghai Airport leading the way, with 5.4% and 4.7% gains, respectively. 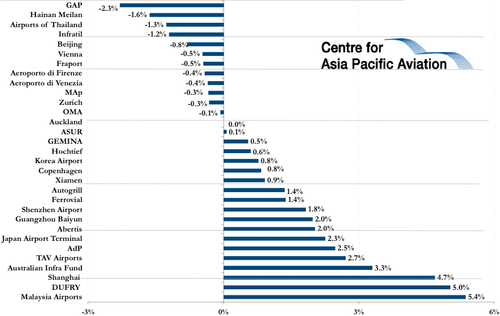