Aviation industry remains “firmly in the red with a fragile business environment”: IATA

IATA Director General and CEO, Giovanni Bisignani, stated the aviation industry remains “firmly in the red with a fragile business environment”, adding that it is “far too early to call this a recovery”. Upon the release of the latest IATA international air traffic statistics for Sep-2009, Mr Bisignani added that the “worst may be over in terms of the fall in demand, but yields continue to be a disaster and costs are rising”.

The one bright spot remains the Middle East, with the region’s carriers the only ones to report growth in the month, with a massive 18.2% increase in demand (RPKs), on a 15.2% capacity (ASKs) growth.

This however was distorted by the shifting of the Ramadan period, which started in August in 2009 compared to September in 2008. The growth was predominantly fuelled by market share gains on long-haul routes via Middle Eastern hubs. However, weaker oil revenues continues to depress economic activity and travel within the region. 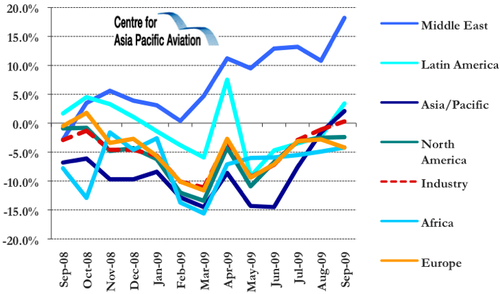 Worldwide IATA scheduled traffic (RPKs) meanwhile, was up by 0.3% in the month, an improvement from the declines of the past 12 months, and the year-to-date decline of 5.3%.

However, IATA added that the apparent year-on-year improvement in demand is misleading, and is largely due to comparisons with an “exceptionally weak” Sep-2008 when traffic fell sharply (-2.9% for passenger and -7.7% for cargo).

Seasonally adjusted statistics show a 0.3% drop in passenger volumes and a 1.4% fall in cargo volumes for Sep-2009 compared with Aug-2009. IATA added that this reflects “the pause seen in the economic recovery in the US and elsewhere in the past few months”. 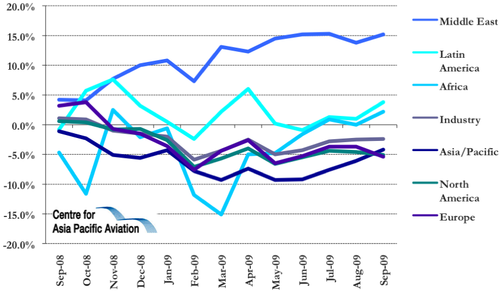 Asia Pacific carriers recorded the most significant traffic (RPKs) improvement, from -1.6% in Aug-2009 to +2.1% in Sep-2009. Bucking the global trend, seasonally adjusted passenger volumes grew almost 1% between August and September.

This region, which IATA has previously stated was the worst hit by the recession, has been boosted by government and central bank stimulus packages, a relatively strong banking system and fewer problems with consumer debt and bank balance sheets, according to IATA.

By contrast, European carriers saw a deterioration in demand from -2.8% in Aug-2009 to -4.2% in Sep-2009, partly reflecting a loss of market share by network carriers on short-haul routes to LCCs.

More significantly, IATA noted that there has been a deterioration in demand on long-haul routes. For routes to Asia, IATA believes that this is as a result of the influence of “home-carrier-bias” which has seen Asia Pacific carriers “reap the benefit of stronger regional economies”. On routes to North America, lower demand, according to IATA, is related to the dip in consumer and business confidence in economies on both sides of the North Atlantic.

North American carriers saw demand largely unchanged (-2.4% in Sep-2009 compared to -2.5% in Aug-2009), with this flattening out in demand being related to a dip in consumer and business confidence.

International passenger load factors stood at 77.1% in Sep-2009 (down from the Aug-2009 Summer holiday peak), as airlines continue to carefully manage capacity (seasonally adjusted passenger capacity has remained unchanged throughout the year).

IATA added that load factors have risen to pre-crisis levels, which “should help to correct the precipitous fall in yields” (-14% for economy, -18% for premium and -20% in cargo). 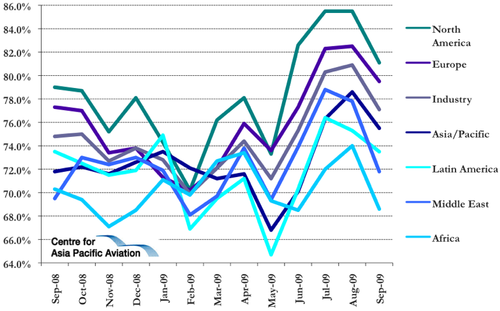 However, on a more positive note, airlines are continuing to carefully manage freight capacity, with seasonally adjusted cargo capacity edging up only slightly in the last two months, which has helped return cargo load factors to pre-crisis levels, although to a still-low 50.8%.

During Sep-2009, Middle Eastern carriers showed the strongest freight performance of any region with a 3.6% year-on-year traffic improvement, while Latin American carriers were the only others reporting growth (+1.8%), although this was a decline from the previous month’s growth of 3.9%.

Carriers in the Asia Pacific region, Europe and North America recorded improvements over Aug-2009 levels, but remained in negative territory at -3.1%, -13% and -5.0% respectively. IATA added that improvements were “broadly in line with improved economic activity in each region”. 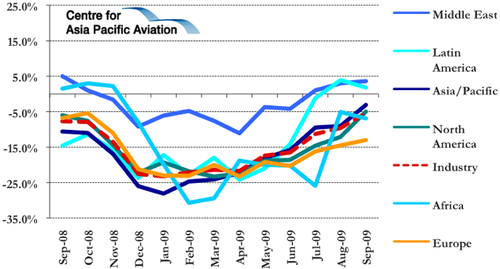 IATA also used the traffic release as an opportunity to slam the UK APD increase, stating it is the “wrong response to the industry trauma”.

According to Mr Bisignani, “the policies of some governments in light of the industry’s trauma are disappointing. The UK is a case in point of a government detached from reality. The global economic crisis makes cost reduction a matter of survival”.

He added that with the new charge (effective 01-Nov-2009), the APD would contribute GBP2.5 billion p/a in revenue, which IATA believes is “completely disproportionate to the GBP572 million that it would cost to offset the entire carbon footprint of UK aviation”.

He added, “charging travellers over four times for their emissions makes absolutely no sense. Instead of raising taxes, the UK government should get behind the aviation industry’s ambitious targets to fight climate change”.

While demand is showing signs of improvement, the precipitous fall in yields and rising costs remain a concern.

IATA added that as airlines adjust capacity to better match demand, aircraft are flying fewer hours (-3% for some aircraft types, according to IATA), which is raising non-fuel unit costs. This situation has been further effected by increases in oil prices, which have risen to above USD75 per barrel (Brent), considerably higher than the USD43 per barrel level at the start of 2009.