After somewhat quickly redeploying capacity out of Venezuela in 2014, Avianca Holdings seems positioned to execute a solid performance in 2015 as a result of having less exposure to troubled economies in Latin America than some of its competitors.

Similar to other airlines with significant exposure to Venezuela, Avianca has opted to redeploy capacity into the Caribbean and domestic routes within the Avianca Holdings network that includes Central America. The airline also plans to expand long-haul offerings in 2015 with the resumption of service between Bogota and Los Angeles and additional frequencies from Bogota to London Heathrow.

Avianca will spend much of 2015 maturing the capacity redeployed in 2014 from Venezuela to other markets. But with the transition now complete, Avianca can now focus on leveraging its strong network in Central and South America and taking advantage of its leading position in some of the stronger economies within those regions.

Avianca spent most of 2014 redeploying capacity from Venezuela

During 2014 airlines serving Venezuela had to initiate significant pull-downs of capacity to reduce their exposure to the country’s crumbling economy and frozen funds owed to them by the Venezuelan government. At the beginning of 2015 Avianca still had more than USD200 million trapped in the country.

At one point, Avianca was Venezuela’s third largest foreign airline by capacity, according to Bloomberg, which reported in Mar-2014 that Avianca was cutting 73% of its flights to Venezuela. Roughly a year later, Avianca accounts for approximately 6% of Venezuela’s international ASKs. 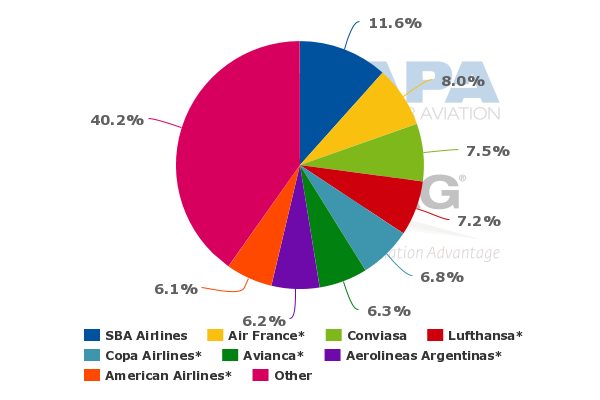 As it pulled down capacity to Venezuela, Avianca opted to increase frequencies on several routes including Bogota to Santiago, San Juan, Guatemala City, Havana, Cancun and Barcelona. It also added frequencies from Lima to Cali and Bogota, and San Jose to Panama City.

Of those routes, Avianca is the only operator on four pairings – Bogota to San Juan, Guatemala City and Barcelona, and Lima to Cali. Data from CAPA and OAG show Avianca’s one-way weekly seats from Bogota to Puerto Rico have increased from approximately 360 to 600 year-on-year. Seats from Bogota to Guatemala City have risen from 400 to 720 and seats between Bogota and Barcelona have grown from approximately 1,012 to 1,785.

In late 2014 Avianca increased its four times per week service from Bogota to Barcelona to daily. Avianca is currently offering about 600 one-way weekly seats from Lima to Cali, up from 500 a year ago.

Data from CAPA and OAG show that the approximate one-way seats on offer from Bogota to Santiago have increased from 2,597 to 5,242 year-on-year. Avanica’s seats jumped 146%, giving it a 49% share on the pairing while LAN’s seats increased 71%. LAN holds a 51% seat share on the route.

Between Bogota and Havana, seats have grown from roughly 832 to 979 year-on-year. Avianca’s capacity share in the Bogota-Havana market has grown from 43% to 61%. Cubana’s seats have fallen by 25%, with its share dropping from 16% to 10% year-on-year. Copa Colombia's seats have remained flat, and it currently holds about a 28% seat share on the pairing.

Total seats from Avianca’s Lima hub to its Bogota hub have increased 14% year-on-year to roughly 7,854. Avianca now holds a 62% share. LAN’s seats on offer have grown 18% and it now has a 38% seat share on the pairing, according to CAPA and OAG data.

Avianca holds a 23% share on San Jose-Panama City after increasing its seats from 400 to 2,002. Copa has a 77% share but its seats on the route are flat year-on-year.

Avianca grows long-haul from Bogota; faces some pressure from Iberia and American

Avianca launched services in Jul-2014 from Bogota to London Heathrow with four weekly flights. It plans to expand its Heathrow service to daily flights in the summer of 2015. Other new international routes Avianca added in 2014 include a Pereira-Cartagena-New York JFK operation.

In 2015 the company plans to resume flights from Bogota to Los Angeles. Avianca is the only operator from its Bogota hub to London and Los Angeles, and competes with JetBlue on flights from Cartagena to JFK.

Avianca faces some pressure in long-haul markets from Colombia in 2H2015 as Iberia plans to add flights from Madrid to Medellin and then to Cali and American Airlines launches flights from Miami to Barranquilla. Avianca operates in all those markets, and will face challenges to its monopoly status on the routes.

Avianca has some geographical advantages over its rivals in 2015

Avianca’s network moves in 2014 occured at a somewhat dizzying pace. But despite the upheaval its traffic increased by only 6.5% on 5.9% capacity growth. Its load factor of 79.2% was in the upper range of previous guidance of 77% to 79%. However, the capacity reallocation pressured yields, reflected in a 9.8% yield decline year-on-year during 4Q2014.

Yields could stay under pressure in early 2015 as the redeployed capacity matures and long-haul markets spool up. But Avianca has an advantage in that a bulk of its international capacity is deployed from Colombia, where economic conditions have remained relatively buoyant compared to other South American countries.

Avianca estimated that its market share in Colombia was 58% in Oct-2014. Colombia is the group’s largest market, accounting for about 30% of its international SKs. 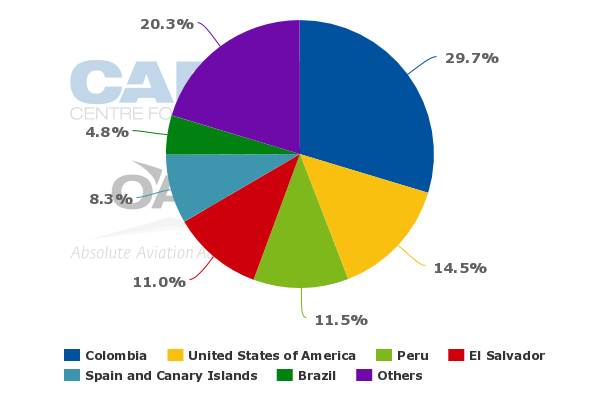 Colombia’s economy is more stable that other countries in South America, with projected GDP growth in 2015 of 4.5% in 2015 compared with 1.4% in Brazil, negative 1.5% in Argentina and 3% for Chile. Avianca does not have as much exposure to Brazil or Argentina as rival LATAM Airlines Group.

Peru, where Avianca also has an affiliate, also has a relatively stable economy with GDP forecasted to grow at a healthy 5% clip in 2015.

Much of Avianca’s projected 5% to 7% capacity growth in 2015 stems from the frequency additions in 2014 and new international services added in the 2014-2015 time period. The company has revised its EBIT margin guidance for the year from 6% to 8% to 8% to 10%, driven in part by lower fuel costs.

2015 holds both challenges and opportunities for Avianca

Like many airlines, Avianca had to move fast to pull capacity from Venezuela during 2014 and redeploy it quickly. And similar to those airlines, Avianca still needs to see the full maturity of that capacity before its yields can recover. It also remains unclear if the routes where Avianca redeployed some capacity will fully absorb the additional supply.

Despite those challenges, the company is poised to shore up ancillary revenue by USD60 million during the next three years and and post USD56 million in cost savings throughout 2015 and 2015.

Although it is less exposed to some of the weaker Latin American economies, Avianca does face some challenges in 2015 from the spool up of long-haul markets and new competitive capacity on some intercontinental routes. But the company seems poised to fully execute the advantages it does have, including leading positions in some of Latin America’s fastest growing markets.