In 2015, Austrian Airlines' passenger numbers fell for the third successive year, to the same level as in 2006. Its ASKs fell during the global financial crisis and have changed little since. Revenue looks likely to have grown in 2015, but is also well below its pre-crisis levels. With only three years of positive operating profit in the decade, Austrian has consistently been the least profitable Lufthansa Group airline.

One of Austrian's big challenges has been to hold on to unit revenue increases when they have occurred. Moreover, its cost base is among the highest in Europe for an airline with its relatively short average trip length. Its short/medium haul focus brings significant competition with LCCs, whose share of the Austrian market has grown over the past decade.

Austrian can take some heart from an improved profit margin in 9M2015, which should presage a stronger FY2015 result (to be published by Lufthansa on 17-Mar-2016). In addition, the Group has established a base for its growing LCC Eurowings at Austrian's hub in Vienna, the no-frills subsidiary's only base outside Germany.

Austrian Airlines' passenger numbers fall for three straight years, back to the 2006 level in 2015

After the global financial crisis, traffic did bounce back quickly from the 7.2% drop in numbers that Austrian suffered in 2009, with a 9.6% increase in 2010.

Nevertheless, Austrian has effectively had a decade of stagnation in passenger numbers.

Austrian's FY2015 financial results have not yet been reported, but its revenue performance over the past decade has been even weaker than its performance on passenger numbers. From 2006 to 2014, its total operating revenue fell by 18.7%.

The financial crisis caused a significant slump in Austrian's revenue per passenger, from which it had not recovered by 2014, although 9M2015 demonstrated the start of something more positive in this respect.

Austrian's passenger load factor dipped in 2015, falling 0.9 ppts to 78.0%, still less than the 80.2% recorded by parent Lufthansa including Eurowings, and the 82.8% of sister company SWISS. This dip was partly attributable to the geopolitical events in the Middle East, Russia and Ukraine, which hit demand - RPKs fell by 1.3% in 2015.

Austrian's operating profit has broadly followed the cycle of the industry, but at lower levels than the global airline average each year. Its pre-crisis operating margin peaked at 2.2% in 2007, when the global average was 3.9% and the Lufthansa Group made 6.1%.

Austrian remained in negative operating result territory until 2013, when it reached a positive margin of 1.1%. In 2014 the margin fell to just 0.5%, but it was back on a recovery path at 9M2015, when it was 3.6% (based on adjusted EBIT, which is a slightly different measure from the operating result previously used by the Lufthansa Group).

In spite of the improvement in 9M2015, Austrian remained the least profitable airline in the Lufthansa Group, as measured by adjusted EBIT margin, and the second least profitable business of all the Group's units. When Lufthansa announced its 9M results in Oct-2015, it said that it expected Austrian's restructuring programme to improve earnings in 2015, with a "significant increase" in adjusted EBIT expected. 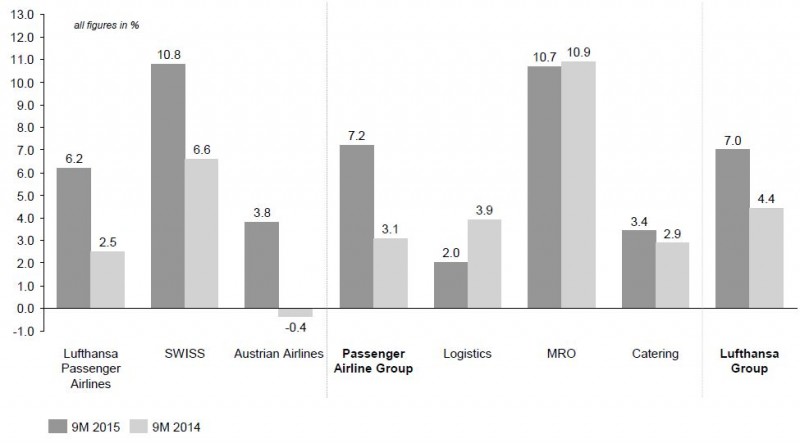 *EBIT before impairments, pension adjustment and asset disposal gains/losses, as a percentage of revenue
Source: Lufthansa

RASK increases have been hard to maintain

The chart below shows the development of AUA’s unit cost (CASK) and unit revenue (RASK) from 2005 to 2014, both indexed to 100 in 2005 and calculated by CAPA. Note that our RASK calculation is based on total operating income.

The recovery from 2005's operating loss was the result of RASK rising faster than CASK, but the subsequent fall back into loss in 2009 came because Austrian could not cut unit cost fast enough to compensate for the fall in unit revenue. It returned to profit in 2013 through the rare combination of stable RASK increase coupled with a CASK decline. In 2014, CASK fell (by 4.3%), but RASK fell more quickly (by 5.0%) and so the margin narrowed.

The chart below suggests that AUA has, in general, been able to pass on cost increases (only just), but has typically not been able to hold on to price increases when costs have fallen.

Note: revenue is total income from operating activities and costs are the difference between this and reported operating profit
Source: CAPA analysis of Austrian Airlines annual results statements

The increase in 9M RASK came in spite of a 1.1ppt fall in load factor, thanks to growing yield. Lufthansa's 9M2015 statement referred to the positive impact on Austrian's yield of "significant adjustments to its capacity and marketing activities". It introduced new fare structures, with a more unbundled approach.

A challenge for 2016 will be to maintain yield growth into a second year of falling fuel prices. 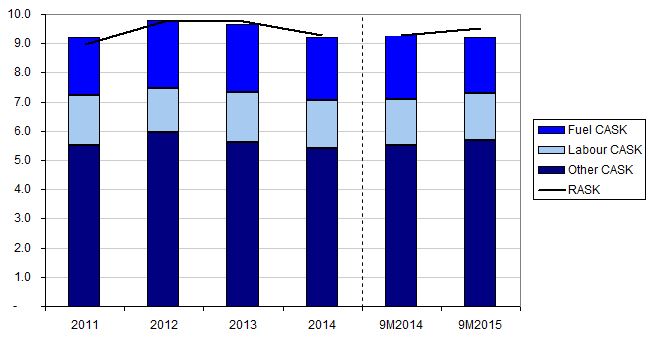 Austrian has been reducing the size of its workforce over a number of years, and average headcount in 2014 was 10.5% below its 2011 level, in spite of a broadly stable level of ASKs. Its labour cost in EUR was also down, by 7.6%, over the same period. Employee cost per employee rose from 2011 to 2015, but ASK per employee improved by 8.2%. Revenue per employee also improved, by 11.8%, over this period.

The reduction in the Austrian Airlines workforce since 2011 has been matched to quite a degree by an increase at sister airline SWISS. This signals the relative importance of the two Lufthansa subsidiaries to the group over this period.

*Calculated as average headcount at end of the period and end of previous period
Source: CAPA analysis of data from Austrian Airlines and Lufthansa Group results statements

In spite of a 9.6% reduction in its CASK from 2008 to 2014, Austrian was still among Europe's higher CASK airlines in 2014, taking account of its average trip length. According to the CAPA CASK database, Austrian's unit cost in 2014 was around 75% higher than an LCC with a similar average trip length. Even allowing for costs associated with hubbing and business class, that is a massive cost differential.

With 84% of its passengers flying on European routes in 2015, Austrian's network is dominated by the short/medium haul routes that are increasingly the domain of LCCs. As with other smaller legacy airlines, it has neither the cost base of the LCCs, nor the long haul network of the bigger legacy airlines.

Of course, Austrian has access to the long haul networks of the Lufthansa Group, but these are facing growing competition from foreign airlines, such as the Gulf carriers. As illustrated by the week of 30-May-2016, the combined seat capacity of Emirates and Qatar Airways will be 37% higher in summer 2016 than it was three years earlier. 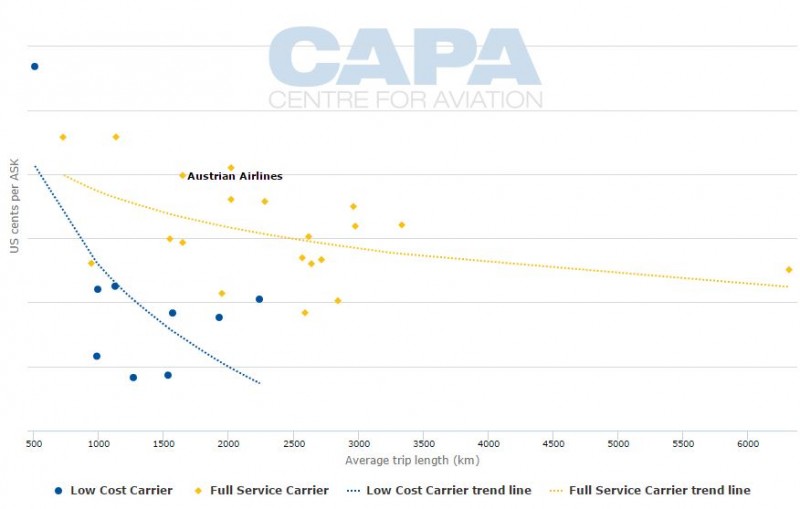 Lufthansa's Eurowings now has a base in Vienna. LCC competition grows in Austria

In the first two weeks of 2016 it has grown to almost 26%, although this partly reflects steps taken by Lufthansa to expand its LCC Eurowings in Vienna.

This is evidence of one strategy of the Lufthansa Group's development of Eurowings (gradually replacing its Germanwings subsidiary) - to combat LCC competition in Germany and elsewhere in Europe. 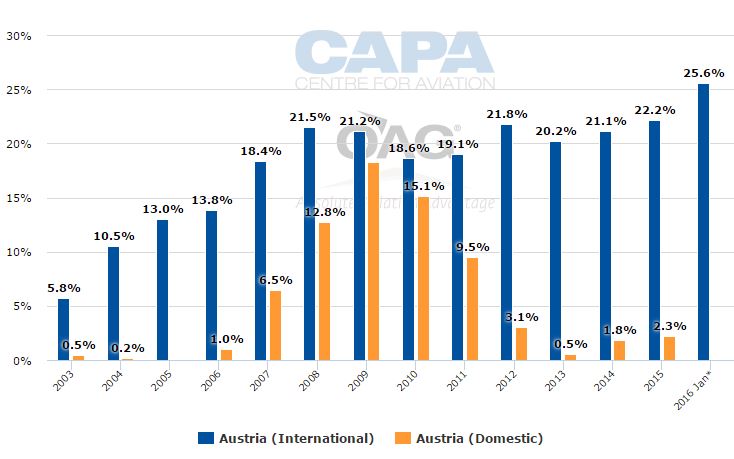 Austrian is, by some distance, the largest airline in Austria, with almost 42% of seats in summer 2016 (based on OAG schedules data for the week of 30-May-2016). However, this share has fallen from 45% three years earlier. The combined share of all Lufthansa Group airlines is 54%, down from 57% three years earlier.

This is in spite of an increase in the share held by Eurowings/Germanwings from 3% to 5%, which is mainly a switch from the Lufthansa brand. Vienna is now the principal Eurowings base outside Germany. The LCC has launched three new routes from Vienna this winter, and plans a further two in the summer 2016 schedule.

The airberlin Group (airberlin plus its Austrian LCC subsidiary NIKI) has borne a dip in its share from 21% to 20% over the same period, reflecting a fall in NIKI's share. Europe's second largest LCC, easyJet, has almost quadrupled its seat numbers in Austria over the past three years, taking it to the number six rank in the country, from number 18 in summer 2013.

Eurowings in Vienna may help the Lufthansa Group, but could challenge Austrian

After a period of extended negotiations over labour terms and conditions, including the temporary transfer of operations into subsidiary Tyrolean Airways, it appears that Austrian has found a clearer path through its industrial relations challenges. Tyrolean was merged with Austrian in Apr-2015.

Nevertheless, it is clear from the Lufthansa Group's cabin crew hiring plan for 2016 that Austrian is not yet regarded by Lufthansa as a reliable growth vehicle. Eurowings is favoured, the Group member that Lufthansa claims to have unit costs similar to those of other European LCCs.

As noted above, Austrian's workforce continues to shrink, setting it apart from the rest of the Lufthansa airlines. Profit improvement in 2015 will be very good news for Austrian, but it will have to work very hard to maintain this trend. Likely lower fuel costs in 2016 should help, but this could eventually also lead to downward yield pressure, particularly as the market becomes ever more accustomed to LCC-style product and pricing.

Eurowings may help to defend the Lufthansa Group in Vienna, but, if successful, it also has the potential to become a growing challenge to Austrian in its own backyard. Further cost efficiency gains will be vital for Austrian.