Austrian Airlines on 1-Jul-2012 finalised integrating its mainline flight operations into its wholly owned regional subsidiary Tyrolean Airways as part of a comprehensive restructuring programme outlined by CEO Jaan Albrecht in Jan-2012 to bring “and sustainably keep” Austria’s largest carrier in the profit zone. The long-overdue streamlining of the company will also see the end of the Lauda Air brand from the summer of 2013. Austrian Airlines Group has recorded an annual negative EBIT for the majority of the last decade despite consecutive cost cutting exercises and a takeover by Lufthansa Group in 2009.

The group comprises three airlines – Austrian Airlines, Tyrolean Airways and Lauda Air – but Lauda’s Air Operator's Certificate (AOC) has just been returned to the country’s civil aviation authorities. Flight operations of the charter subsidiary were merged with Austrian’s back in 2004 for all but one aircraft. This aircraft has now moved to Tyrolean’s AOC.

All other Austrian Airlines’ widebodies and all its narrowbodies are now operated by Tyrolean Airways Tiroler Luftfahrt GesmbH and flights aboard this fleet are thus performed under the Tyrolean VO IATA code and under the OS flight numbers. The required approvals for flights to non-European Union/EAA states have been secured.

Transfer of Austrian Airlines’ fleet and crew to regional entity

The transfer of Austrian's fleet to Tyrolean comprised seven 737-800s, 22 Airbus A320 family aircraft, six 767-300ERs and three 777-200ERs as well as their cockpit and cabin crew. Innsbruck-based Tyrolean Airways already operated more than half of all Austrian flights, mainly domestic flights and flights to Central and Eastern Europe aboard a fleet of 14 Bombardier Q400s, 15 Fokker 100s and nine Fokker 70s.

The regional airline, which commenced scheduled services in 1980, became a 100% wholly-owned subsidiary of Austrian in March 1998 (it acquired an initial 43% stake in 1994) but continued to operate independently. In 2003 the fleet was rebranded as “Austrian Arrows” with livery changed to match that of Austrian Airlines.

The “Austrian” brand will remain on all aircraft but the supplementary brand “arrows” will sequentially be removed by the end of 2012. Uniforms of Tyrolean and Austrian ground staff and cabin crew have also been aligned to give the joint operations a common visual appearance. The distinctive red outfit of Austrian’s female flight attendants is being retained.

While flights operations of the whole group now rest with the regional carrier, Austrian Airlines keeps responsibility for station management, the technical department, sales and all central management functions such as network planning, personnel, finances and marketing. The internal reshuffle of Austrian’s flight operations is the cornerstone of the group’s most recent restructuring plan titled Work Programme, which aims to create “competitive framework conditions” to steer the company into long-term profitability.

Too much red ink in the past decade

See related article: Changes – and perhaps conflict – ahead for Austrian Airlines as it seeks to return to profitability

Austrian's current fiscal year has not started on a good footing. The group sustained an  operating loss of EUR66.7 million in 1Q2012, a decline of 5% from the EUR63.6 million loss recorded in the year-ago period, while total operating income rose year-on-year 3.8% to EUR464.3 million and passenger numbers grew 10.1% to 2.3 million. For Mr Albrecht, the “unfavourable” financial results of the first three months reconfirmed that the company’s costs are too high and that “the countermeasures we have initiated within the framework of the Work Programme are important and urgently needed”.

Fundamental cost reduction in return for a capital injection by Lufthansa

The Work Programme targets a modernisation of the company’s structures and work practices as well as cost reductions of EUR220 million to EUR260 million, in a bid to end the stream of red ink. Mr Albrecht is aiming to achieve EUR220 million savings this year and a further EUR20 million in 2013 and in 2014.

Mr Albrecht’s Work Programme for Austrian Airlines is based on the concept that all stakeholders should make a contribution to the restructuring of the company. Stakeholders incorporate employees but equally Vienna Airport, Austria’s ATM provider AustroControl and some 60 suppliers.

At the end of Apr-2012, the company said it had identified around EUR180 million in cost reductions or revenue increases and that it had received confirmation from its politicians that “location-related costs in Vienna will be reduced”. These include reduction of the tax on tickets, in place since 01-Apr-2011, and the stockpiling of oil, as well as a new tariff model with Vienna Airport.

Parent company Lufthansa Group has committed a EUR140 million capital increase of Austrian Airlines Group conditional upon Austrian reducing its structural cost base. The recapitalisation will be used to support the harmonisation of Austrian’s medium-haul fleet and to fund the restructuring process, specifically the redundancy payments to the flight crew.

The operations transfer to Tyrolean has been implemented despite initial protest by employees, failed attempts to reach cost reductions and reforming the collective bargaining agreements. Labour unions are still evaluating a legal challenge to certain aspects of the decision such as the validity of the works council.

Roughly 110 pilots – or about one fifth of Austrian’s cockpit crew – and 214 flight attendants refused to accept the terms of the transfer and have left the company. However, they did receive a very attractive package to do so. Flight attendants have received a golden handshake of around EUR150,000 per person whereas pilots would receive EUR430,000. For pilots with a longer seniority the severance pay amounts could reach EUR550,000.

Overall, the cost to Austrian of the operations transfer is estimated at EUR80 million, of which the bulk is for the voluntary redundancy payments to flight staff. Austrian Airlines flight crew now work under Tyrolean contracts. Their salaries have not been reduced following the transfer but they have been frozen till the pay of their Tyrolean colleagues reaches the remuneration level of the Austrian flight staff.

Tyrolean’s work force of about 1500 employees has increased to 3500 employees as a consequence of the operational transition. The number of staff employed by Austrian Airlines Group at the end of 1Q2012 was 6774 people, down 2.4% from the previous year group’s total workforce.

However, the departure of 110 pilots has caused staff shortages in the summer flight schedule, forcing Austrian temporarily to wet lease five aircraft from Lufthansa, Augsburg Airways, Contact Air and Welcome Air. It also is hiring some of the pilots that have made use of their privileged termination of employment on a temporary and case-by-case basis.

Austrian Airlines Group has stated that parallel to its restructuring it will invest up to EUR200 million in the next two years for the upgrade of its fleet. It is moving towards a streamlined narrowbody fleet of 29 Airbus aircraft and is replacing 11 737s with up to seven A319 or A320 aircraft. It has already phased out four 737s and the remaining seven 737s are for sale.

Austrian’s – now Tyrolean’s – narrowbody fleet currently consists of seven 737-800s which are configured in a single class-layout with 184 seats, seven A319s, nine A320s and six A321s. The additional A319/A320s would likely be sourced from Lufthansa, which has 82 firm A320 family/A320neos on order for delivery between 2012 and 2018 plus five options. Fleet modernisation and harmonisation will allow Austrian to reduce its maintenance, operational and training costs.

Austrian has also confirmed it will upgrade the cabins of its 10 widebody aircraft with new seats and personal IFE. The upgrades will start in late 2012 and run through spring 2013. In addition its Q400s and aging Fokker aircraft will be equipped with a new cabin design.

Austrian has concluded a new cooperation agreement with Vienna International Airport which it said will “secure the companies’ common future by strengthening transfer traffic and long-haul development”. Vienna Airport is Austrian’s main hub, from where it offers 121 non-stop destinations and about 283,000 weekly seats, according to Innovata data.

Austrian is still the dominant carrier at Vienna International Airport, offering almost half the available seat capacity (while owner Lufthansa occupies another 5%). Air Berlin and its subsidiary NIKI are the second largest player at Vienna, accounting for about 21% of capacity. 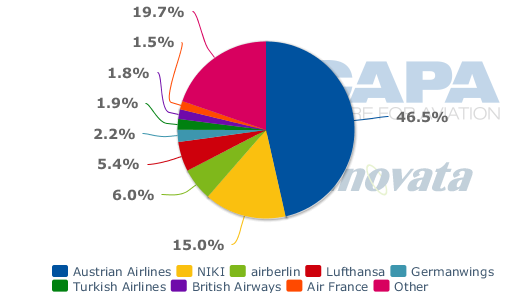 However Austrian’s share of movements over peak times (between 06:00-09:00 and 16:30-19:30) is only about 26% while its main competitors NIKI and sister carrier airberlin hold jointly an almost equal share. Austrian together with other carriers in the Lufthansa Group have about a 35% share of peak time movements in the Vienna market. 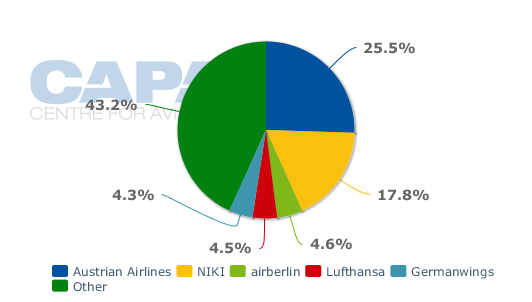 Austrian is benefitting from the long-awaited opening of Vienna Airport’s dedicated Star Alliance Terminal on 5-Jun-2012. Transfer passengers represent about 58% of the carrier’s traffic. Vienna Airport has always boasted it could guarantee users a unique minimum transfer time of 25 minutes due to its efficiency and small size, and it has affirmed that transfer times in the new Star Alliance Terminal will remain minimal.

Star Alliance has about a 57% share of seat capacity at Vienna Airport and oneworld has about a 15% share.

More long-haul for Austrian in framework of Atlantic Plus-Plus

Austrian Airlines has always remained faithful to its Focus East network strategy throughout the consecutive restructuring exercises and Mr Albrecht’s Work Programme does not deviate from this historic focus. The carrier at present deploys 39% of its seat capacity to Eastern European markets, according to Innovata data. 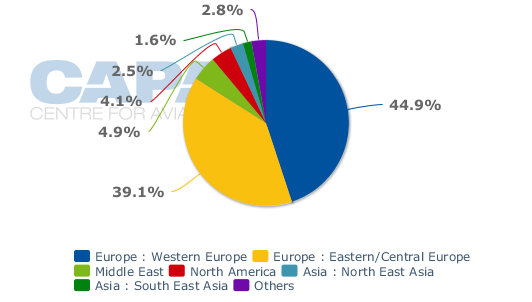 Currently four of Austrian’s top 10 routes, based upon seats available, are to Eastern European destinations. This includes Sofia in Bulgaria, Bucharest in Romania, Moscow Domodedovo and Tel Aviv. 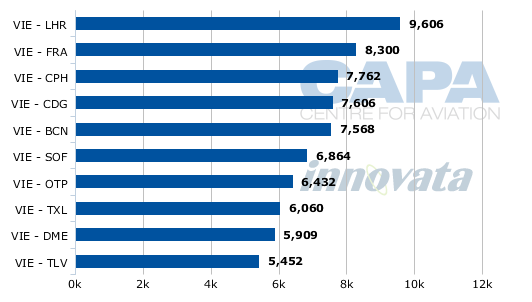 Austrian’s key markets are within Europe. It operates a limited long-haul network and has recently cut flights to Mumbai. The 767 previously used on this route is now deployed on flights to and from Tel Aviv and to Tehran. Austrian Airlines continues to fly six times a week to New Delhi. Other long-haul destinations include Toronto, New York JFK and Washington Dulles in North America and Tokyo, Bangkok and Beijing in Asia.

Potential expansion for Austrian will likely occur in North America and could include new service to Newark, Chicago and Los Angeles. These flights will be operated in the scope of Star Alliance’s antitrust immunised trans-Atlantic joint venture among Air Canada, Lufthansa and United. But Austrian will not add any new long-haul routes if its planned cost cutting measures are not firmly implemented.

Austrian seems to have secured its future within the Lufthansa Group. Earlier this year, Lufthansa CEO Christoph Franz clearly indicated he would not hesitate to let Austrian follow the same path of bmi (sale) or Lufthansa Italia (closure) if the company did not get its act together. It might have been a hollow threat, since Austrian fulfills an important component in Lufthansa's strategy to be the dominant group in Central Europe, but the tactic worked and Austrian has embarked on a genuine restructuring process.

Mr Albrecht has accepted that there are no sacred houses in the very competitive European market and Austrian Airlines is remaining Austria’s flag carrier only in name. Operations have been taken over by its smaller and cost conscious regional carrier. Archaic work practices and wage structures are being channeled out.

As Austrian becomes leaner it is better placed to face the challenge of increased competition at its home base Vienna where hybrid low-cost carrier NIKI and its parent company airberlin are gaining ground.

LCCs already have about a 28% share of capacity on international routes to/from Austria. Given the dismal outlook for European traffic this year, there is little doubt this will grow further. As it continues to restructure, Austrian will have to work vigorously to continue to eliminate inefficiencies and find new markets to preserve its existence.