The growth of LCC competition to Austrian Airlines and its parent Lufthansa Group at Vienna was gathering pace before the COVID-19 crisis, and this threat is likely to intensify.

The Ryanair subsidiary Lauda and Wizz Air have grown rapidly to become the biggest airlines at the airport outside the Lufthansa Group in 2019. Wizz Air and Ryanair Group are also now among the most vocal European airlines on seizing growth opportunities in the post-crisis recovery.

The combination of new taxes and the planned EUR40 air fare floor appears calculated to force LCCs (Ryanair Group and Wizz Air in particular) to raise ticket prices or to operate at a loss in Austria. This may well be subject to legal challenges.

Although dressed up as an environmental measure, the Austrian government's plans look like protectionism.

The government of Austria has agreed a EUR600 million aid package to support Austrian Airlines. The state will contribute EUR150 million to cover the airline's losses resulting from the COVID-19 crisis and guarantee 90% of a EUR300 million six-year loan from a consortium of Austrian banks.

In addition, EUR150 million of new equity will be invested by Austrian Airlines' parent company, Lufthansa.

Lufthansa and Austrian have given commitments to maintain the Vienna hub for 10 years and also to strict ecological requirements as conditions of the package, which is dependent on EU and shareholder approval for Lufthansa's own state aid from Germany.

Sustainability commitments given by Austrian Airlines include moving passengers to rail on short haul journeys (travel time less than three hours), as far as adequate infrastructure is available and direct accessibility to Vienna airport is ensured.

Austrian must also halve CO2 emissions within Austria and reduce total emissions by 30% by 2030, and improve fuel efficiency by 1.5% pa.

No sooner was this state aid agreed for Austrian Airlines than the country announced plans to introduce a EUR40 price floor on air fares, in addition to changes to its Air Transport Levy.

This structure is to be replaced with a flat EUR12 charge for almost all flights, but a EUR30 charge for flights of less than 350km.

The new EUR30 tax for these very short haul flights is being introduced as an environmental measure to reduce emissions on journeys where other modes of transport are available.

However, it cannot have escaped the attention of the Austrian government that the new charges will hit LCCs proportionately more than Austrian Airlines.

Moreover, the new charges on short/medium haul will represent a greater percentage of ticket prices for LCCs than for legacy airlines. On sub-three hour journeys, Austrian will be moving much of its traffic to rail and so will not be affected at all by the increased charges.

EasyJet lost some share in 2019, but was still the number five airline by passengers at Vienna.

Although a pay dispute at Lauda has led to the threat of Lauda closing its Vienna base, there have been some signs of progress. An ongoing Ryanair Group presence at Vienna, whether through Lauda or Ryanair, seems likely in the recovery. 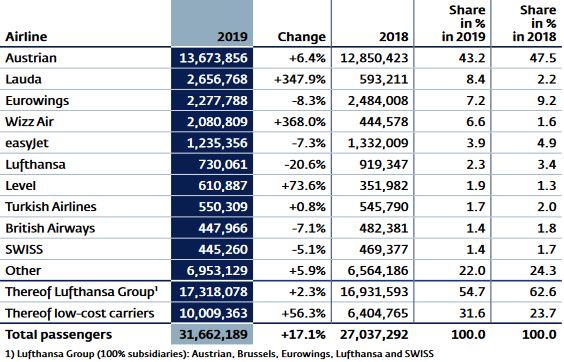 More controversial than the new taxes, and also hitting LCCs much more than Austrian, is the planned fare floor.

This would wind the clock back decades to the days of price regulation and prohibit airlines from selling tickets for less than EUR40 (including taxes).

Ultra LCCs Ryanair Group and Wizz Air Group have average fares of less than EUR40 across their entire networks.

Ryanair Group, which includes Vienna's number two airline by passenger numbers, Lauda, has an average fare before ancillaries of less than EUR37.

Comparable data for Austrian Airlines on short/medium haul is not available, but analysis of Lufthansa Group data for calendar 2019 indicates that the average total revenue per passenger for its network airlines is EUR107 on European routes.

Based on a reported comment from Lufthansa Group CEO Carsten Spohr that 8% of traffic revenue is ancillaries, this suggests an average fare of EUR99 on European routes for the network airlines.

For Lufthansa Group's lower cost subsidiary Eurowings, the average fare is around EUR77.

An average fare figure for Austrian somewhere between EUR77 and EUR99 seems reasonable.

Even at the low end of this range, it is more than double the level of Wizz Air and Ryanair Group. 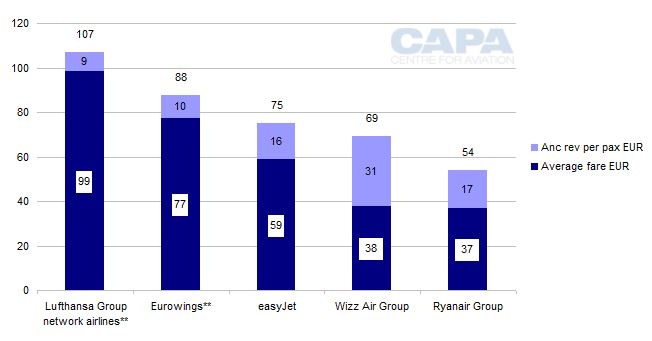 With the current short haul and medium haul taxes at EUR3.50 and EUR7.50 respectively, and the ultra-LCC average fares at EUR37-EUR38, a EUR40 minimum ticket price (including taxes) would mean that Ryanair and Wizz Air would still be allowed to sell tickets not very much below their average fares.

They are among Europe's highest margin airline groups and so could still be profitable or could at least break even at prices EUR3.50 to EUR7.50 below their average.

However, if taxes rise to EUR12, or EUR30 for journeys under 350km, this will change the equation. Both Ryanair and Wizz Air generated operating profit per passenger of approximately EUR8 per passenger in the last financial year.

Maintaining the same price to passengers with a EUR12 tax would obliterate this margin, so the two ultra LCCs would need to increase their fares to remain profitable.

The sounds of resurgent protectionism are in the air

The EUR40 fare floor (if it survives any legal challenges), in combination with the new tax levels, looks designed to force ultra LCCs Ryanair and Wizz Air into raising their ticket prices, thereby reducing demand for their flights, or to force them to operate at a loss.

Coming right after an agreed state aid package for Austrian Airlines, these moves looks like barely disguised protectionism by Austria.

If the price of supporting flag carriers is to protect them from competition (and there are growing signs of this intent), the wider economy will be the victim. At a time when there are predictions of up to 300 million tourism employees globally losing their jobs, this is indeed a high price to be paying.