Market share forecasts from the major players in the Australian domestic sector signal an escalating battle for rapidly recovering passenger demand. This will, of course, be good news for travellers, but a competitive bloodbath would not be helpful for airline financial performance.

The post-pandemic market share predictions of Qantas and Virgin Australia add up to more than 100%, and that is even before factoring in the growth ambitions of Regional Express (Rex) and the imminent entry of the start-up LCC Bonza. Obviously not everyone will be right in their assumptions.

Airlines in competitive domestic battlegrounds often demur when asked about market share, preferring to focus on profitability. However, airlines generally have an idea – public or private – about what their optimum share should be.

In Australia, there are contrasting opinions about which airlines will be competing for which segment of the domestic market.

However, it is still plain that some airlines may end up with a significantly smaller footprint than they have visualised.

Australian domestic capacity has been extremely volatile over the past two years, driven by changes in border restrictions by state governments.

Capacity had recovered well through the middle of 2021, but it crashed again with the onset of the Delta variant wave.

Another sustained recovery began in early Nov-2021 as some important interstate traffic flows were restored. The graph below shows that the rate of recovery has become even steeper in Dec-2021 as more state borders open, and capacity is expected to almost reach pre-pandemic levels by 31-Dec-2021.

Australian domestic capacity, as measured in weekly seats, 2018 to 2021* (projected) 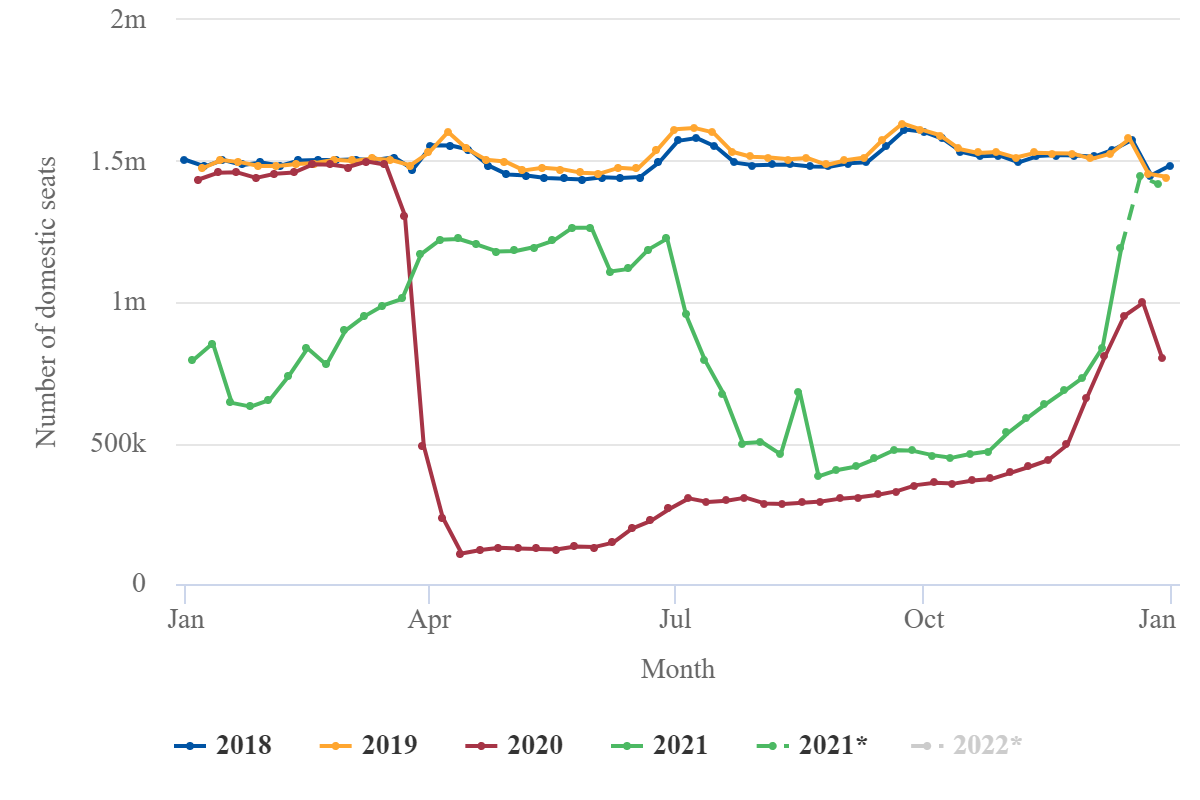 The next chart shows how capacity share has shifted for the main players in the Australian domestic market during the coronavirus (COVID-19) pandemic.

In Feb-2020, before COVID-19 emerged, Qantas accounted for just under 40% of domestic seats, and its subsidiary Jetstar 18-19%. Virgin Australia held approximately 30%, with its Tigerair subsidiary on 5-6%.

Other smaller players made up the remainder.

Many things have changed in the competitive structure of this market since then.

Tigerair was shut down, Virgin Australia had a trip through voluntary administration, and Rex started a domestic jet service on trunk routes.

Australian domestic market share, measured in seats, for the week of 6-Dec-2021 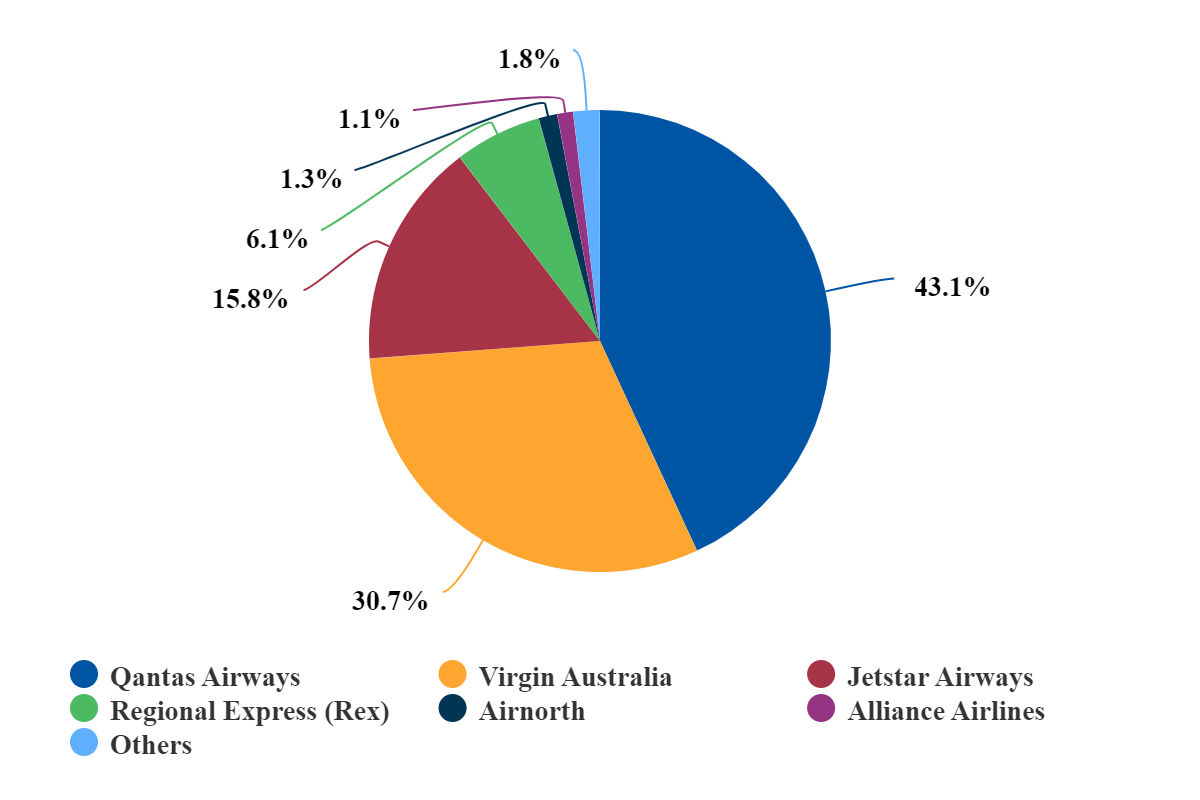 So how do the airlines see the domestic market developing?

Qantas estimates that it will hold a 70% traffic share – combined with Jetstar – when the domestic market is fully reopened, said Qantas CEO Alan Joyce at the CAPA Australia Pacific Aviation Summit on 7-Dec-2021. This will be helped by Jetstar filling some of the gap left by the demise of Tigerair.

Mr Joyce said one of the main reasons Qantas is not currently at this level is that the east-west flights across Australia are suspended due to Western Australia’s strict border rules. These routes, served by widebody aircraft, account for a significant proportion of the airline’s domestic seats.

The Qantas Group will likely remain below its 70% market share estimate until the east-west routes fully resume, said Mr Joyce.

Domestic services are ramping up as more state borders are reopened

Although Western Australia remains largely closed, progressive reopenings by other states are boosting demand. For example, Qantas experienced a surge in bookings following the recent announcement that Queensland would relax domestic entry restrictions from 13-Dec-2021.

Mr Joyce said booked load factors on Queensland flights for the week of 13-Dec-2021 rose by 25 percentage points in the space of an hour after the border decision was announced. Other major interstate border flows have also been reopened during the past month.

Qantas aims to build its domestic capacity beyond pre-COVID-19 levels to accommodate rising demand. Group capacity is expected to reach 100% of 2019 levels in Jan-2022, Mr Joyce said. By Apr-2022 the Qantas full service unit will likely be operating 115% of pre-pandemic domestic capacity, with Jetstar’s capacity reaching 120%.

Mr Joyce said the priority for Qantas in 2022 will be getting its aircraft back in the air, and its stood-down employees back at work. This means the airline will be restarting as many flights as it can to get cash flowing and to stimulate travel. The focus will shift back towards profitability in 2023, he said.

Virgin Australia aims to secure 33% of the Australian domestic market

Before the pandemic Virgin typically had a market share of 31%, with Tigerair accounting for another 7%, Ms Hrdlicka said. Virgin is aiming to take over less than a third of the former Tigerair market share, representing the portion of Tigerair’s traffic that is best suited to Virgin’s new value airline business model.

“There is a gap left by Tigerair in the market place – we’re [filling] some of that gap, and leaving the rest of it because we think it’s more appropriate for [other carriers]”, said Ms Hrdlicka.

Virgin was down to just six flights per week on the Melbourne-Sydney route during the height of the lockdowns caused by the Delta variant of the coronavirus. Now it is back to 24 flights per day on this route, and it intends to boost these numbers further over the holiday period.

Virgin has been steadily regrowing its narrowbody fleet since cutting it back dramatically during its stint in voluntary administration in 2020. The airline operated 85 737s before the pandemic, but it relaunched with a fleet of just 56 in Nov-2020. Its widebody fleet, some of which was used on domestic routes, was axed altogether.

The airline has been progressively leasing more 737s, and additions announced recently will result in it reaching a fleet size of 84.

Ms Hrdlicka said Virgin is not yet done with fleet expansion, as the airline still has more potential to grow.

The size of the pie is growing in the Australian domestic market – but the two main players are also growing as the market rebounds.

Ambitious plans by Rex and Bonza will be another factor, and there will probably not be enough pie to satisfy everyone’s appetite.

To stretch the metaphor further, airlines will be conscious that scrambling for every last crumb must not divert them from pursuing their financial and network strategies.

Beyond the bare market share percentages, the airlines have contrasting views about which segments of demand they will be tapping into, and who their main rivals will be in those segments.

Some airlines have adjusted their business models and others have entered the market, so it will be for the future to tell how the head-to-head battles will line up.

There has been enough change that the pre-pandemic precedent is of limited help in predicting the competitive balance.