Growth in Middle East-Australia frequencies is slowing as Emirates, Etihad Airways and Qatar Airways approach bilateral capacity ceilngs. Emirates has nearly reached its limit while Etihad will reach its cap when it launches Abu Dhabi-Perth services in Jul-2014. Qatar reached its limit when it opened Perth in 2013.

Qatar is once again considering Sydney, while Etihad would like an additional daily service to each of Melbourne and Sydney, and possibly Brisbane too. But in the short term there are notable developments in the Australia-Middle East market. Etihad's A380 deployment to Melbourne and Sydney represents 25% seat growth over Jul-2014 levels. Once that growth is realised, Etihad will have grown seat capacity 76% since 2013. Qatar meanwhile is planning to down-gauge its new, and only other, Australian city – Perth – from a 777 to A350.

Collectively Gulf carriers flew 11.5% of all international passengers to/from Australia, although the vast majority was from Emirates, Australia's second-largest carrier flying more than half the international passengers Qantas does. Meanwhile Qantas is changing its Melbourne-London service to facilitate better connections, opening 13 more options, while also reducing ground time in London by some 14 hours.

Etihad Airways to deploy A380 to Melbourne and Sydney; 76% growth in 3 years

Etihad's deployment of its A380 to Sydney from Jun-2015 and Melbourne from 2016 will create 25% growth in Australia over Etihad's Jul-2014 schedule, including the launch of daily Abu Dhabi-Perth flights. This assumes Etihad replaces its daily 777-300ER on each Melbourne and Sydney with the A380 while leaving four weekly A340-600 Sydney services in addition to the daily Perth and Brisbane A330-200 service.

Growth from A380 equipment follows Etihad's recent up-gauging in Australia. Its daily Abu Dhabi-Melbourne service went from an A340-500 to 777-300ER while seven of 11 weekly Abu Dhabi-Sydney services went from A340-600 to 777-300ER, delivering more capacity but also efficiency. With these changes over the past year, the forthcoming Perth launch and future A380 services, Etihad will grow capacity by about 76% in Australia in three years. Etihad will have grown from about 6,700 weekly one-way seats to Australia (non-stop and via Singapore) in 2013 to 11,800 in 2016.

Overall there is little change in Etihad's class proportions; it is increasing capacity fairly evenly across the cabins. Etihad's A340-500s and A340-600s have about 15-17% of all seats in premium cabins, in line with the A380's 16.3% share.

The 777-300ER represented a slight drop, with 14.5% of seats in premium cabins, although overall the 777 has more premium seats than either of Etihad's A340 variants. Any loss in premium share from the A340 to 777 switch would likely have been made up in fuel savings.

The capacity up-gauge brings Etihad's flagship aircraft, and associated high-profile marketing, to Australia while also offering growth. When Etihad opens its Perth service in Jul-2014 it will fully utilise its traffic rights, measured in frequencies.

CEO James Hogan told the Sydney Morning Herald in Mar-2014 that he would seek additional rights to bring Sydney from two daily (including three weekly Virgin Australia services) to three daily services, Melbourne from one to two daily and possibly Brisbane from daily to double daily.

Etihad has a strong if contentious brand in Australia thanks to its strategic and equity partnership with Virgin Australia. Prior to that Etihad positioned itself strongly, for example branding one of Melbourne's sport stadiums the "Etihad Stadium". But in terms of international passengers to and from Australia, Etihad is still a small player. In calendar 2013 Etihad was the 12th largest carrier, behind AirAsia X, Thai Airways and China Southern while only slightly ahead of Garuda Indonesia.

Qatar Airways to deploy A350 instead of 787 to Perth

Qatar Airways has a significantly smaller footprint in Australia, with even Vietnam Airlines and Scoot larger than it.

Qatar had planned to change Perth from 777 (which it launched Perth with) to 787 service in 2013 but then cancelled it, initially blaming it on the 787's technical problems. Qatar CEO Akbar al Baker told Travel Weekly the carrier saw that Perth needed the extra capacity from the 777.

While Qatar's 787-8 seats 254 – almost the same as the -200LR's 259 – the 787-8 offered a complicated operation as the aircraft would have been on the edge of its operating envelope, according to Mr al Baker. The A350 will have the range without any passenger or cargo payload restrictions. Qatar has said the A350 could take over Perth sometime in early 2016.

Qatar Airways considering Sydney service if bilaterals permit. But scheduling will be tight

Qatar has had an off/on relationship with Sydney, showing interest and then discounting it. Most recently, Mr al Baker expressed interest in serving Australia's largest city if there is an expansion to the Qatar-Australia bilateral, which became maximised with Qatar's Perth service, he told Travel Today. An expansion of the bilateral is not likely before 2015.

Even with additional traffic rights, a Sydney operation would be difficult. Qatar's Doha hub structure is not fully compatible with the ultra-long-haul flights to the east coast of Australia, where Sydney operates with a 23:00 curfew. Melbourne is already a tight operation for Qatar, and it is slightly closer than Sydney and has no curfew.

Qatar's challenge is to fit an ultra-long-haul return flight between its main scheduling banks, which are not as compatible as those of Emirates. Qatar's Melbourne service departs Doha at 00:55, one of the first flights to leave in that departure bank.

After a quick 90 minute turnaround in Melbourne, it departs at 22:55 to arrive back in Doha around 06:00, leaving limited time to make connections during Qatar's 07:00-09:00 departure wave, its biggest of the day. Qatar previously saw some limited connections on Melbourne-Doha on certain days of the week if onward European flights were at a reduced frequency.

In order for Qatar to keep an arrival back in Doha around 06:00 and to allow for buffer room to clear the Sydney curfew, the originating service would likely need to depart Doha around 23:00. That is when the Doha hub is still building inbound arrivals, potentially limiting the number of connections and ultimately the viability of the service.

With Emirates and Etihad already having a large presence in Sydney, there is little room for anything less than a robust offering. (An intriguing scenario is how a Sydney service might change should or when Qatar partners with British Airways, which could feed the route and offset any less-than-ideal flows from the Qatar network.) 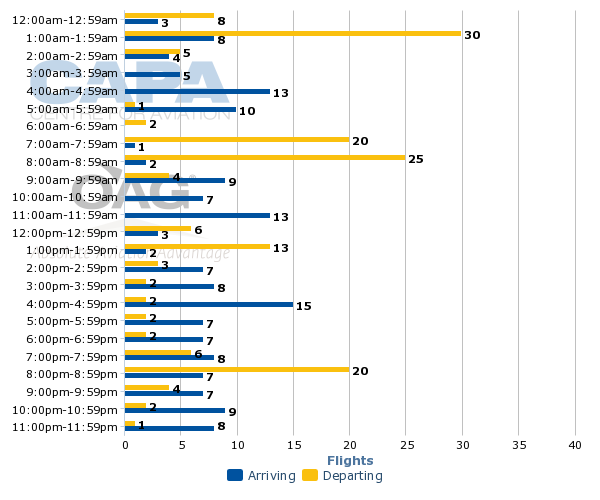 Connections are also part of the story behind Qantas' re-timing of its Melbourne-Dubai-London service, which had arrived in Dubai around midnight, requiring long waits for onward connecting flights.

The new schedule, effective 20-Jul-2014 after Dubai runway works finish, will see the service arrive around 07:00, enabling connections to Emirates' largest departure period of the day. 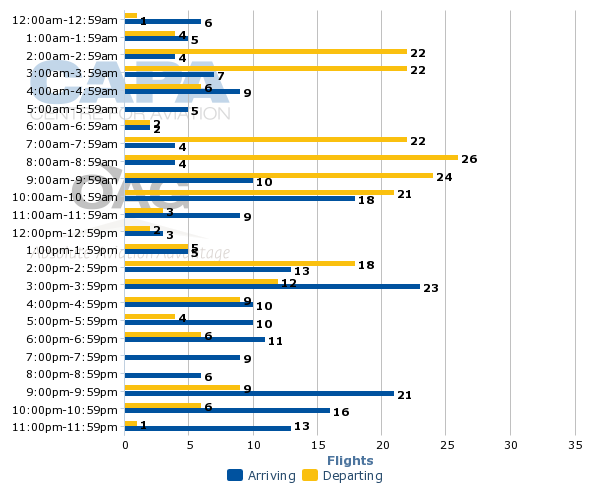 Qantas also maintains its Dubai-London Heathrow continuing service. Early morning arrival times at Heathrow are generally prized by passengers and airlines, but Qantas was unable to sustainably offer a peak hour arrival service, forcing a strategic change. London is over-competitive and it is important for Qantas to maintain efficient offline connections to other European cities.

At the same time, for those needing an early morning London arrival, there is Qantas' Sydney-Dubai-London service available (possibly requiring another connection) or Emirates' Dubai-London Heathrow service arriving at 07:00.

17 European cities Qantas MEL-DXB flight will connect to within four hours of arrival in Dubai: 20-Jul-2014

There will be flow-on benefits to Emirates as it likely receives more passengers from Qantas while also able to sell London better. Previously Qantas' Sydney-Dubai-London and Melbourne-Dubai-London services both departed Dubai at similar times that did not fully mesh with Emirates' network, creating over-capacity.

Qantas from 20-Jul-2014 will have a service that overlaps with two existing Emirates Heathrow services (07:45 and 09:40, with Qantas departing at 09:10) but during a busier time of day. The return Heathrow-Dubai service departs Heathrow at 13:30, close to Emirates' 14:15 departure but later than Emirates' first Heathrow departure of the day at 08:40.

The new schedule also reduces ground time (and parking costs) in Heathrow as previously both A380s from Melbourne and Sydney would arrive early in the morning and not depart until late evening. From 20-Jul-2014 the Sydney-originating flight arrives Heathrow in the morning and departs in the afternoon as the Melbourne-bound flight.

The Melbourne-originating flight arrives in Heathrow in the afternoon and departs in the evening as the Sydney-bound flight, reducing ground time between the two A380s by a total of around 14 hours. By changing the Heathrow timetable and ending regular A380 services on the Sydney-Hong Kong route, Qantas will be able to up-gauge Sydney-Dallas from a 747-400 to A380, allowing for further 747 retirement and cost savings – as well as a very welcome non-stop return flight, rather than the one-stop necessary with the 747.

After a growth period in late 2012 and 2013 – and the Qantas alliance – Emirates serves five Australian cities with 84 flights a week. Emirates is resting, partially due to some bilateral restrictions, on a very high position.

In Australia Emirates carries more than half the international traffic Qantas does. Although Emirates is not (yet, at least) the de facto flag carrier for Australia the way it is for India, it is a leader in the Australia-Europe market and has brought profound change to global aviation's view on competition and partnerships.

But in the near future it is Etihad that takes centre stage. While its new premium products may capture attention, it is the size of capacity increase – 25% between Jul-2014 and the A380's deployment to Melbourne some time in 2016 – that is the story. The status quo is not a welcoming environment for such growth, what with heavy competition, seasonal swings in performance and a declining Australian dollar. Even if the growth is fully implemented, Etihad will continue to be much smaller than Emirates is today.

And Emirates will surely grow: President Tim Clark has spoken of 100 weekly flights to Australia. Meanwhile Qatar is smaller than Etihad in Australia. Among the competition between the three Gulf carriers, Qantas continues to evolve its European network in hopes of finding a niche that is at the very least break-even. Virgin Australia is meanwhile unlikely to change its sole Middle East service, three weekly flights from Sydney to Abu Dhabi.

Further growth from Gulf carriers is dependent on a liberal approach from Australia on air service agreements. Expansion of those agreements will continue to challenge Qantas, but the beneficiary remains Australia's travellers and inbound tourism.